That’s the question The Cook Political Report’s David Wasserman asks in a detailed analysis published today. (Note to readers: The CPR site requires subscription, but I will quote parts of the analysis and have reproduced the below graphic, kindly shared by Wasserman and CPR for fivethirtyeight readers, for which I express our thanks.) 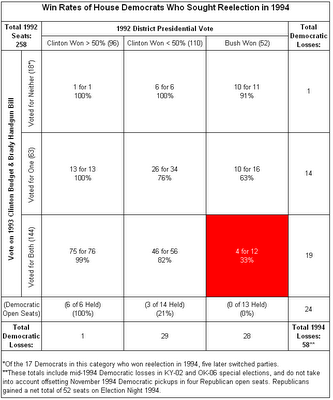 Today’s divide, however, is the generation gap–no, make that gulf–that characterized President Obama’s victory in 2008. In 1992 and 2000, Bill Clinton and Al Gore performed just slightly better among voters 60 and older than they did among voters 18 to 29 years of age. But in 2008, Obama won 66 percent of voters 18 to 29 and just 45 percent of voters 65 and older–a staggering 21 point difference.

Much has been made about how this disparity in support poses a big long-term problem for the GOP. That’s true, assuming younger voters maintain their current outlook towards the political parties as they age. But aside from flurries of stories about angry senior citizens packing town halls, precious little attention has been given to why the generation gulf poses a grave short-term threat to Democrats in 2010.

According to a new Pew Survey Research poll, Democrats’ edge on the generic congressional ballot test is down to 45 percent to 44 percent, a considerably tighter margin than what Democrats enjoyed in both 2006 and 2008. Unsurprisingly, a large part of this shift has been driven by independents … [b]ut which group is driving an even larger part of this shift? According to Pew, senior citizens…

If Pew’s latest numbers are even halfway accurate, they should frighten Democrats. Their surveys show voters 65 and over, who gave Democrats a 50 percent to 39 percent edge on the generic ballot in November 2006, giving Republicans a 51 percent to 43 percent edge now. If that reversal holds, Democrats could be ruing the “year of the angry white senior” at the polling place, not just the town hall.

Returning to the figure above, Wasserman games out the type of districts that may flip next year based on what we know about those the Democrats lost in 1994. Looking down the columns of the figure, almost all of the Democratic-held districts that flipped were either carried by George H.W. Bush in 1992 or carried by Clinton with less than 50 percent of the vote. (Remember, there was Ross Perot’s third-party votes.)

But looking across the rows, we see that, among Democrat incumbents who ran for re-election, those Democrats who voted for either Bill Clinton’s budget or the Brady Bill, or especially those who voted for both, accounted for all but one of the 34 House defeats that year. The other 24 GOP pickups were open-seat races, so there was no incumbent voting record–although note again that the losses were strongly predicted by Clinton’s 1992 district-level performance.

In 1994, it wasn’t easy to be a Bush-district Democrat who voted for both the Clinton budget and the Brady handgun bill. In fact, out of the 12 Democrats who fit this description and ran for reelection, two thirds lost. So far this year, 20 of the 49 McCain-district Democrats have already voted for the “cap and trade” bill. If the House Democratic leadership insists on putting a health care bill with a public option to a vote, how many of these 20 can be relied upon to take on more political risk?

On the other hand, the lessons of 1994 might serve as a reality check for GOP challengers to Democrats who plan to vote against their party’s leadership on both of this year’s dominant agenda items, such as Reps. Bobby Bright (AL-02), Parker Griffith (AL-05), and Chet Edwards (TX-17). In districts with challenging numbers, the strategy of voting (and running) against party leadership has persisted for generations, if sometimes for only one reason. It works.

This goes a long way to explaining the reticence of Blue Dog Democrats. They want to keep their seats. One quibble I might have with Wasserman is whether the cap-and-trade or stimulus vote will be the companion danger to the vote on whatever health care bill emerges from Congress.

In any case, to answer the “angry white senior” question, what we will have to watch next November is: (a) how white seniors vote in 2010; (b) what their share of the overall turnout is; and (c) what the fates are of House and Senate Democrats who voted for either or both of President Obama’s stimulus [or cap-and-trade] and whatever health care bill ultimately makes it through Congress this year.