5:02 p.m. | Updated Although the national polling picture hasn’t gotten appreciably worse for Democrats over the past two or three weeks, there aren’t too many places where it has gotten manifestly better. One exception, however, is in California, where a plethora of polls show both Barbara Boxer and Jerry Brown having gained ground on their Republican rivals in the races for Senate and governor, respectively.

One of these polls — which is branded as being a product of the University of Southern California and The Los Angeles Times but in fact reflects a collaboration between the Democratic polling firm Greenberg Quinlan Rosner and the Republican polling firm American Viewpoint — has drawn an objection from the campaign of Meg Whitman, the former chief executive of eBay who is Mr. Brown’s Republican opponent in the gubernatorial race.

In a memo posted on Ms. Whitman’s Web site, her pollsters — David B. Hill and John McLaughlin — characterize the L.A. Times/U.S.C. poll, which showed Mr. Brown with a 5-point lead, as an “outlier” because, in their view, it does not reflect a realistic view of the partisan composition of California’s electorate. They write:

The Field Poll’s party profile for likely voters is 44 percent Democrat and 35 percent Republican, reflecting a Democrat partisan advantage of only 9 percentage points. Brown’s unexpected lead among all voters and likely voters in the outlier L.A. Times/U.S.C. poll may be solely attributable to the fact that its various samples reflect an unrealistic 14- to-20 point Democrat advantage.

Although thoughtful and even-handed — polling memos certainly get much, much worse than this — their effort strikes me as a little overzealous. There have been five other polls of the California gubernatorial race released within the last 10 days, all of which show some deterioration in Ms. Whitman’s standing, and depict the race as now being anywhere from dead-even to leaning 5 points in Mr. Brown’s direction. The L.A. Times/U.S.C. poll, which also gives Mr. Brown a 5-point advantage, is well within the range of statistical noise from the other surveys.  This is hardly a case — as in the New York gubernatorial race, for instance — where the polls imply vastly different things about the state of the race.

Nevertheless, let’s take the objection by Mr. Hill and Mr. McLaughlin at face value: Is the partisan composition of the L.A. Times/U.S.C. poll “unrealistic”? The short answer is that there is not enough evidence to merit that conclusion.

Mr. Hill and Mr. McLaughlin describe a Democratic advantage of “14 to 20 points” in the poll. It’s the lower end of that range that we should be concerned with, however: among likely voters, the poll shows either a 14- or a 15-point lead in partisan identification for Democrats, depending on how you calculate it; the higher figures reflect results among all registered voters, which nobody is paying much attention to at this stage.

A 14- or 15-point advantage is broadly consistent with exit polling from California in 2008, in which 42 percent of California voters identified as Democrats and 30 percent as Republican: a 12-point advantage for the blue team. Since both the L.A. Times/U.S.C. poll and the exit poll contain sampling error, and other types of error, the two results are not meaningfully different from one another.

But a lot of us are expecting the Republicans to narrow their party identification deficit this November because they appear to have an advantage in voter enthusiasm this year, which was not true in 2008. Thus, Ms. Whitman’s pollsters might be assuming that the “right” number would be, for instance, a 9-point advantage for Democrats, which is where another poll they mention, the Field Poll, has established it.

I have little doubt that Republicans are poised to make gains in partisan identification nationwide this year. But it is presumptuous (although not necessarily wrong) to assume that the same will be true in California this year. There are several reasons to think that California could be an exception to the rule:

1. There is a ballot initiative in California this year, Proposition 19, which would legalize the possession of small amounts of marijuana for personal consumption. The initiative, which polls suggest is a favorite to pass, might be motivating more young voters to show interest in this year’s elections, and that may translate into more support for Mr. Brown and Ms. Boxer, even though both have come out opposed to the initiative (as have the Republican candidates).

2. There has been a longer-term trend away from Republican affiliation in California (see chart below). Although past trends are not necessarily indicative of future ones, it is also not unreasonable to hypothesize that the trend might continue — particularly given the demographic changes within the state.

3. California has been under the leadership of a Republican governor, Arnold Schwarzenegger, who has become quite unpopular in the face of particularly high unemployment and the state’s fiscal crisis. 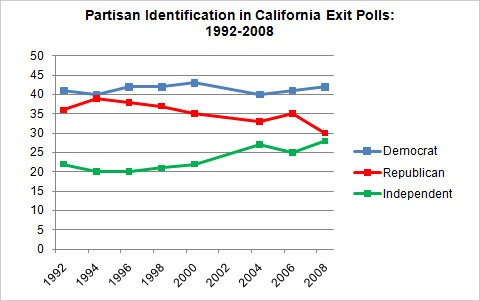 While examining the partisan composition of a poll can sometimes be a useful way to distinguish authentic changes of opinion among the electorate from statistical flukes, the notion that there is any one right answer as to the question of what the partisan composition of an electorate “should” be is dubious. The 14-point edge that the L.A. Times/U.S.C. poll shows for Democrats is not manifestly “unrealistic” — nor is the smaller, 9-point advantage that the Field Poll shows. Were some poll to show a 21-point edge for Democrats, or to show the two parties about even, that’s when it might be worthy of this degree of scrutiny.

Personally, if I had to pick one or another of the polls, I would not bet against the Field Poll, which has a good track record. But polling averages generally do better than any one poll in isolation — and in California, we have a wealth of polls that are, on balance, remarkably self-consistent. The consensus of polls suggests that the gubernatorial race is best thought of as being a tossup, with perhaps the slightest of advantages toward Mr. Brown.

The heart of the comparison that the Whitman campaign is making is not accurate. They are comparing the Party ID of our sample to the party registration of the Field poll. These are two different numbers. Party ID asks how people generally identify themselves politically. Party registration is determined by how people registered in the state and is part of the registered voter file from which we sample respondents.

Our party registration numbers are almost identical to the Field poll, +8 Dem in ours vs. +9 Dem in Field. The Whitman campaign neglected to highlight this distinction.

You can find these data reported in the first page of our cross tabs.