Yesterday, Arkansas’ Mike Ross, an influential Blue Dog Democrat, stated that he was opposed to a public option in the Democrats’ health care reform package. “An overwhelming number of you oppose a government-run health insurance option, and it is your feedback that has led me to oppose the public option as well,” Ross asserted in a letter to his constituents.

Ross may well have gotten a significant number of letters and e-mails against the public option. He may have hosted a town hall forum before an audience who was skeptical of such a provision. But if Ross had actually polled his district, it’s unlikely he would have found overwhelming opposition to the public option. Instead, he might even have found a that a plurality or majority of his constituents supported the public plan. 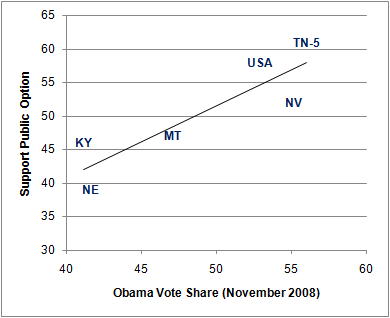 While Arkansas-4 does not have a lot of Obama voters, it does have a lot of people in poverty: 20.5 percent of its population, which ranks it 50th out of the 435 Congressional Districts. It is basically like an exaggerated version of Kentucky where, according to the Research 2000 poll, 46 percent support the public option and 45 percent oppose it. That the public option is “overwhelmingly” unpopular in such a district is unlikely.

We can systematize these results by means of a regression analysis that accounts for the Obama vote share and the poverty level in each district. (Technically, we’ll be using a logistic regession, treating each of the voters included in one of these surveys as a separate data point.) This analysis finds that support for the public option nationwide is about 55 percent, against 36 percent opposed, similar results to what I believe to be the most reliable polls on the subject.

What’s more interesting, though, is where we project the public option in individual districts. We find that:

Obviously, there is a margin of error inherent to this analysis when applied to any individual district. The polls that inform this analysis themselves have a margin of error, and there is an additional layer of error introduced by the statistical process that we apply to the data. But in Ross’s district, for what it’s worth, the projected numbers are 49 percent in favor of a public option and 41 percent opposed.

The districts represented in blue in the map below are those where we’d project the public option to have plurality support if a poll were conducted there; those in red are where we expect a plurality to oppose it:

The raw projections for all 435 districts can be found below. Blue Dog Democrats are indicated by a lower-case ‘d’ and a lighter shade of blue.