Former Nebraska Senator Chuck Hagel was confirmed Tuesday as President Obama’s new secretary of defense. Mr. Hagel — after failing to clear a Republican filibuster 12 days ago — cleared a cloture vote easily early Tuesday before being confirmed by the Senate by a vote of 58 to 41.

But Mr. Hagel’s confirmation was more partisan than those for other recent secretaries of defense, and by a large margin, with votes from 54 Democrats and 4 Republicans. For the data we have available — covering all defense secretary votes since Jimmy Carter was sworn in as president in January 1977 — Mr. Hagel is the only defense secretary to be confirmed with fewer than 90 votes. 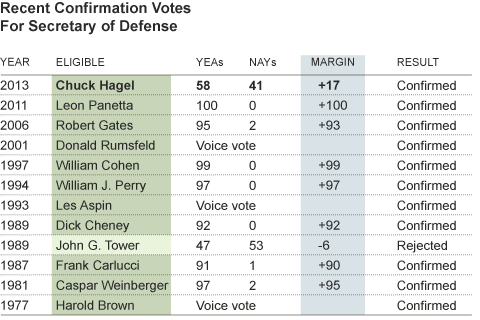 In fact, three recent nominees — Donald Rumsfeld, Les Aspin and Harold Brown — faced such little opposition that they were confirmed by a voice vote, where senators are not even troubled to go on the record with a yea or nay.

John Tower, former President George Bush’s nominee for defense in 1989, was rejected by the Senate after allegations of “womanizing” and “hard drinking.” But the rejection of a cabinet nominee is exceedingly rare; it has happened only nine times. Instead, troubled cabinet nominations are usually withdrawn.

Mr. Hagel is in the rare position of gaining confirmation with less than overwhelming support in the Senate.