After a college career that included winning the 2001 national championship with the Duke Blue Devils and appearances on the All-ACC first team and All-American third team, Carlos Boozer thought he’d be a first-round pick in the 2002 NBA draft. Mock drafts agreed, predicting the junior would go between 15th and 25th overall.

The NBA invited Boozer to New York for draft night, but the power forward and his agent decided to stay at his parents’ house in North Carolina and throw a party with his friends and family. It was set to be a celebration — he remembers an excellent food spread. But as the picks kept coming, Boozer kept waiting. “I was excited and nervous and all those emotions that come through when you are waiting for your name to get called,” he recently told FiveThirtyEight. “The first three or four picks go by. The first 10 picks go by. Shoot, then the first 20 picks go by, and I’m like, ‘Wait, when’s my name going to get called?’ ”

Boozer dropped out of the first round — all the way to the Cleveland Cavaliers at 35. Boozer said the experience inspired him. “That night left a huge chip on my shoulder with a lot to prove,” he said. “It’s like anybody in America going for a job interview and getting turned down, except when you’re an athlete and you’re trying to go to the professional level, you get turned down on national television over and over and over again.”

Boozer isn’t unique in saying that falling in the draft created a chip on his shoulder. The Boston Celtics’ Jared Sullinger said his drop in 2012 will stay with him “for the rest of [his] career.” In 2013, Ben McLemore slipped out of the top five, then told reporters, “I can definitely say I come in with a chip on my shoulder.” This year, Shabazz Napier led the University of Connecticut to an NCAA championship but didn’t hear his name called until No. 24, prompting draft-night talk of his desire to prove himself. Nik Stauskas went eighth, which he felt was too low, claiming that both he and former Michigan Wolverines teammate Trey Burke (drafted the previous year) would play with chips. Even analysts use the trope. Bill Simmons, editor in chief of FiveThirtyEight’s corporate sibling Grantland,1 said about Burke’s potential: “I also think he’s going to have a chip on his shoulder since he went ninth. You want chip-on-the-shoulder guys in the draft.”

It got better from there. By the end of the season, he earned second team All-Rookie honors. Boozer eventually made two All-Star teams, and among all players drafted in 2002, he is second only to Amar’e Stoudemire in career win-shares.

The data, however, suggests Boozer’s success wasn’t due to the chip on his shoulder, just as the players picked ahead of him didn’t flame out because they had nothing to prove. After looking at 10 years of the first and second rounds of the NBA draft, we found little to no evidence that players who drop in the draft perform any better than players who were selected either near their expected draft location or before it. The chip-on-the-shoulder narrative might make for compelling copy, but it’s not much more than that. It’s more fable than facts.

We categorized 480 players into three categories — Shoulder Chip players (fell in the draft compared to mock drafts’ expectations2); Team Darling players (picked before their expected slot); and Expectation players (drafted around their expected slot)3 — based on where they were drafted relative to where the mock drafts said they’d be drafted. Overall, 18 percent of players drafted between 2001 and 20104 ended up in the Shoulder Chip group, 16 percent in the Team Darling, with the remaining 65 percent of players in the Expectation cohort. 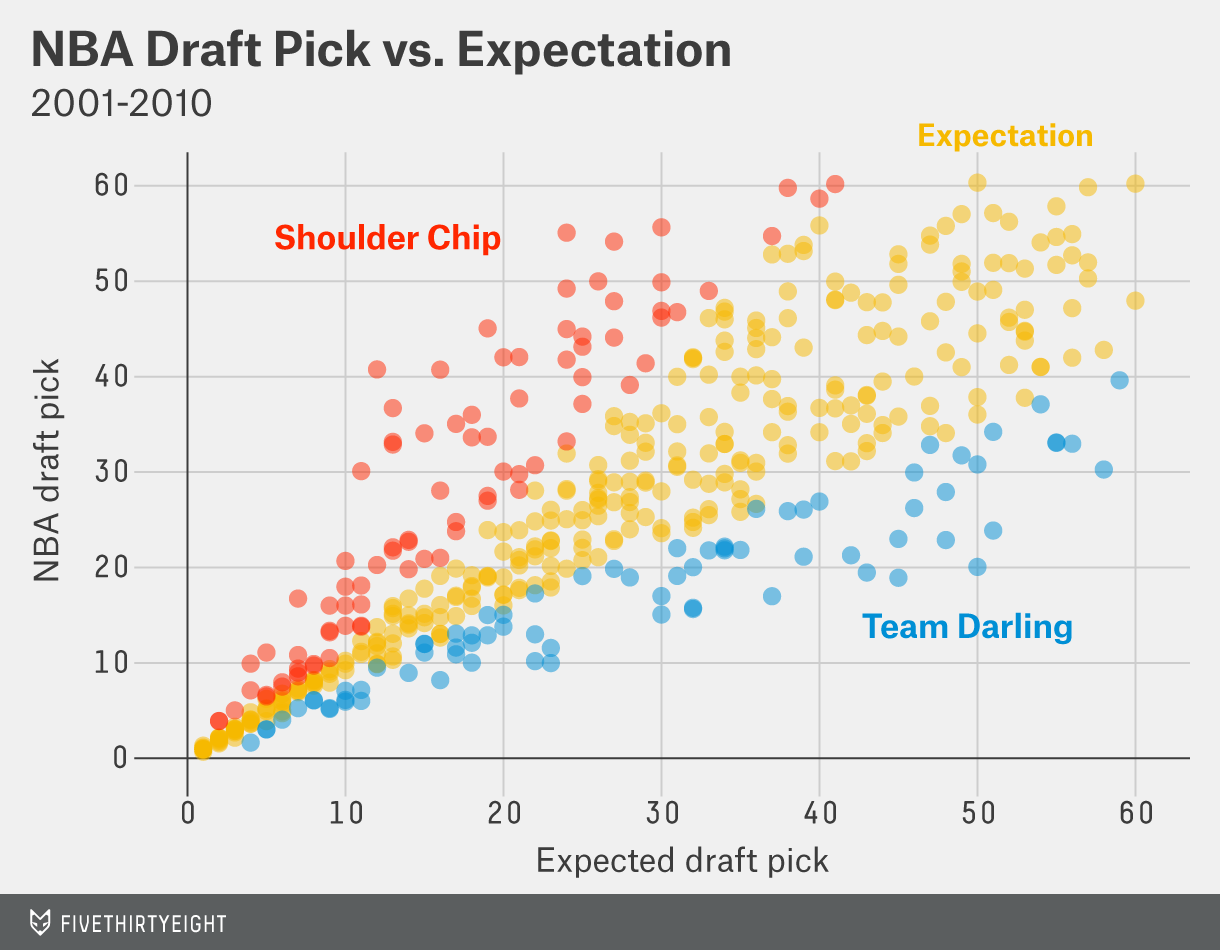 To judge a player’s success, we used the number of win shares he earned in the first four years of his career.5 The chart below shows the percentage of players in each category who had various numbers of win shares. If the Shoulder Chip group was different from the others, we’d expect its line to have a noticeably different distribution. And yet … 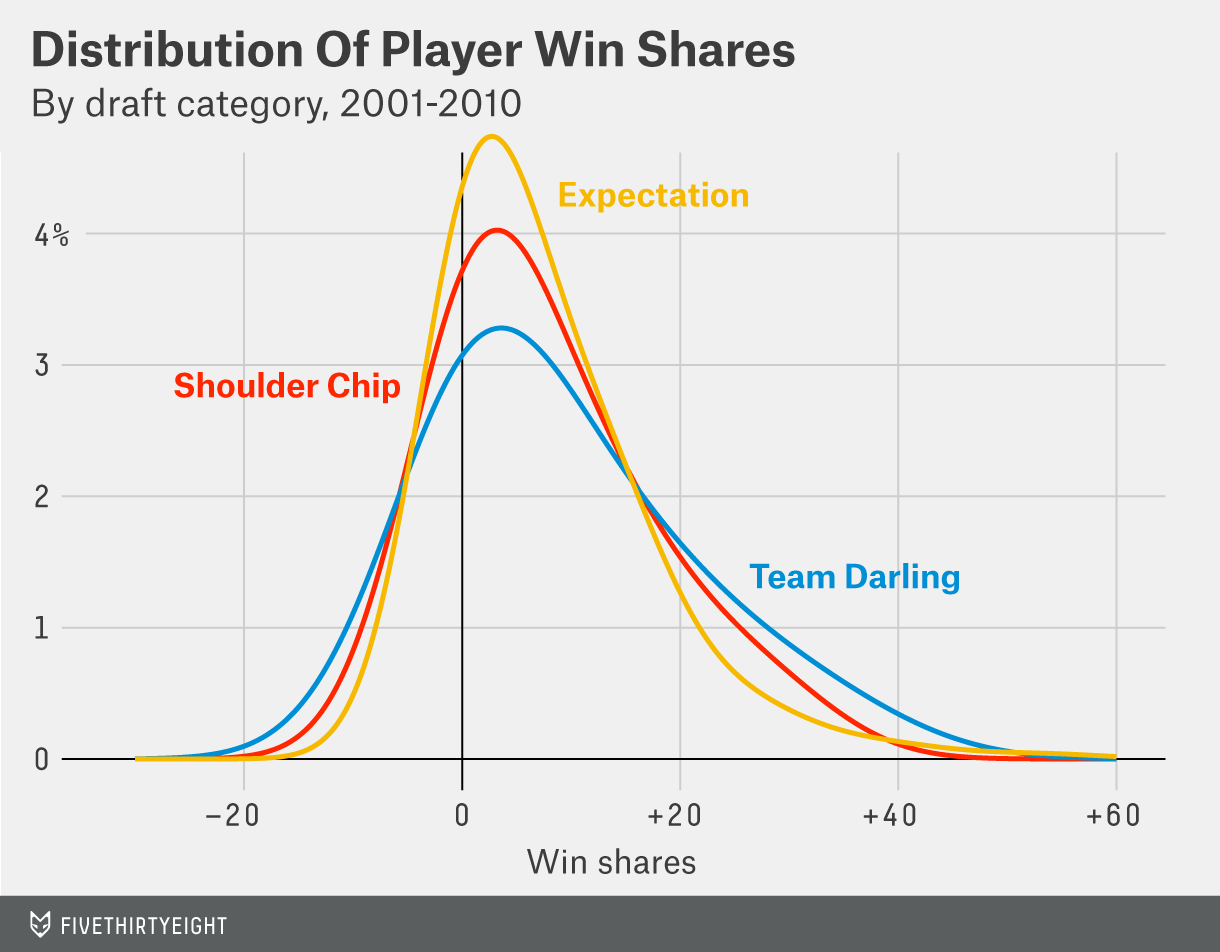 It doesn’t. There are no obvious differences in eventual player performance based on draft category. The curves for the Shoulder Chip and Team Darling groups are slightly to the right of players who were drafted at their expected slot, but the difference is not significant.

Simple enough, but for this analysis to hold up, we have to do more than just compare the overall distribution of player win-shares in the Shoulder Chip group to other players. After all, Chip players were, on average, picked later in the draft, meaning that this group is inherently devoid of surefire superstars and No. 1 picks like LeBron James, Dwight Howard and Derrick Rose.

The easiest way to get around this is to compare players against others who were drafted in similar positions. We grouped players into one of five categories: Picks Nos. 1-5, 6-10, 11-20, 21-30, and 31 or above.

The graphs below replicates the curves from the previous chart but does so within each draft category. (Given that there were only two Shoulder Chip players in the group with Picks 1-5, we aren’t showing that plot).6 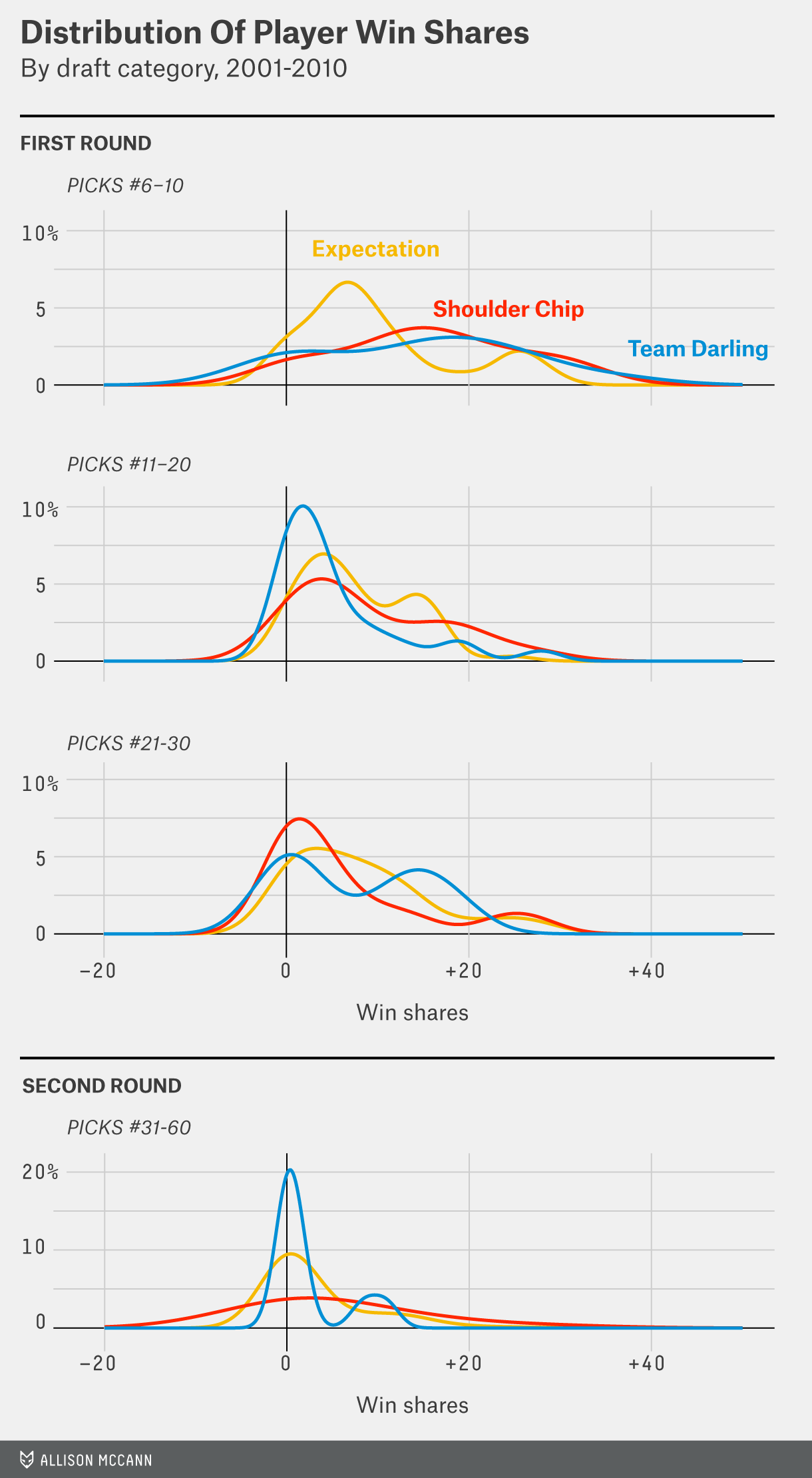 Within each group, there is once again little to no evidence that win shares can be attributed to differences in draft category. In most of the plots above, the Shoulder Chip group appears to fall at or below the other two categories in terms of future production.

Looking at these charts and more formal statistical modeling7, it’s clear that it doesn’t matter where an NBA player is drafted relative to where he expected to be drafted. The guy’s going to play how he’s going to play, it seems.

It is important to point out that these results, however, do not account for the possibility that Shoulder Chip players are more hit or miss than their counterparts. In many cases — such as Boozer’s and Sullinger’s — Shoulder Chip players fell because of injury concerns, and it would make sense that those types of players could provide the biggest risk for a team on draft day.

It’s possible that the boom-or-bust phenomenon often associated with taking injured players or those who come with “baggage” is legitimate. General managers should still consider taking Shoulder Chip players, if only because they could be diamonds in the rough. A third of NBA second-rounders never play in the league, so players like Boozer may indeed offer the highest return on teams’ limited investments. You might get a dud, but you also might get a stud.