There’s a pretty broad consensus that Republicans got the better of the budget negotiations that concluded late Friday. Here’s David Weigel of Slate making the point. Here’s Andrew Stiles of the National Review. And Richard Eskow of the Huffington Post. And Carl Cameron of Fox News. And Ezra Klein of the Washington Post.

As you may have inferred from the media outlets they write for, these analysts don’t normally agree on all that much. Mr. Cameron makes the most succinct case for why they’re all thinking along the same lines:

While Republicans wanted to cut more spending in Saturday’s early morning compromise to keep the government open, they think they got the better of the deal.

Here’s why: HR1 was originally to seek spending cuts of $32 billion until Tea Party conservatives insisted on more than $60 billion. House Speaker John Boehner won more cuts than he originally sought and got the Senate to agree to votes to defund the health care reform law and groups like the nation’s largest abortion provider Planned Parenthood – once votes Senate Majority leader Harry Reid said he’d never allow to come to the floor. Back on Feb. 3, Reid called $32 billion in cuts “extreme” and “draconian.”

Namely, the Republicans wound up with more cuts (about $38.5 billion) than John Boehner’s HR1 bill had proposed originally ($32 billion). Normally, you’d expect the two sides in a negotiation to meet somewhere in the middle — maybe not exactly in the middle, but you wouldn’t expect one party in the negotiation to do better than its original offer.

This logic is clear enough — the deal the Democrats cut looks bad if you use Mr. Boehner’s $32 billion offer as a refernece point. And appearances matter here, since these big numbers are all pretty abstract to the general public, and so reporters and pundits might matter more than than they usually do in shaping the understanding of who “won” the negotiation.

Before Mr. Boehner made his initial offer on Feb. 3, there were essentially two other offers on the table. First was the budget request from the White House, which — although the White House tried to bill it as a budget cut — actually represented about a $26 billion increase over 2010 spending levels, according to The Times’ reporting. Then there was the position of the Republican Study Committee, which reflected the views of members of the Tea Party. That proposal called for about $100 billion in cuts relative to Mr. Obama’ s budget, or about $74 billion relative to the 2010 baseline.

The average of these two positions was a $24 billion cut. Mr. Boehner’s first proposal, for $32 billion in cuts, was actually fairly close to this, slightly less than halfway to the White House’s offer from the Tea Party’s.

Given that Mr. Boehner made this offer, and that the White House actually ended up agreeing to more cuts than he proposed, I certainly would not argue with anyone who has critiqued the White House’s negotiating skills.

At the same time, I would argue that Mr. Boehner’s offer may have been a poor one. He should have asked for more in cuts.

The reason, as John Sides has inferred, is that the median member of the U.S. House — the critical 217th vote required to approve the budget proposal — is much, much closer to the Tea Party’s position than to President Obama’s.

The DW-Nominate system, designed by Keith Poole and five other political scientists, is probably the best system for measuring the ideological preferences of members of Congress. It rates each member, based on their roll call votes, on a scale that runs from -1 for extremely liberal, to +1 for extremely conservative.

DW-Nominate scores for the current Congress are not yet available, but I looked up the scores for the 41 members of the Tea Party Caucus who also served in the 111th Congress. Their average score was +.671, which is very conservative.

DW-Nominate also has a technique for measuring the president’s ideology. Their rating for Mr. Obama, in the 111th Congress, was -.403, which was very close to the average score (but just slightly to the left) of the average House Democrat.

Where does the median member of the House rate on this scale? Since the Republicans have the majority, he’ll be a Republican, of course. Specifically, he’ll be the 25th most liberal Republican from among their 241 members, which means he’s in about the 90th percentile for liberalness among all Republicans.

“Liberal” is a relative term, however, especially in this context. By historical standards, there are very few moderate Republicans in Congress, let alone liberal ones. So this comparatively liberal Republican is nevertheless likely to be pretty conservative.

Specifically, I estimate that he has a DW-Nominate score of +.423. The way I determined this was by looking at the DW-Nominate scores for Republicans in the 111th Congress, estimating a mean and standard deviation for them, and inferring where the 90th percentile fell.

(An implicit assumption here is that Republicans, as a whole, are no less conservative in the 112th Congress than they were in the 111th Congress. One can certainly debate that. Usually when a party picks up seats, its average member moves toward the center, since the new seats it occupies come in swing districts. But given that many of the newly-elected Republicans ran on extremely conservative platforms, and that several of the more moderate Republicans actually lost their seats in the House, my guess is that Republicans have not moved appreciably if at all to the left.)

What this means is that the median member of the House is only about 23 percent of the way from the Tea Party’s position to Mr. Obama’s: 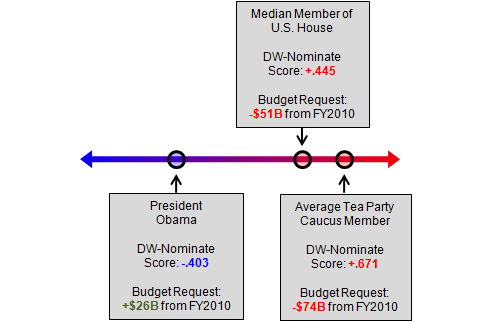 In other words, I estimate that the median member of the House actually wanted to cut the budget a bit more than the deal that was agreed upon — by about $51 billion rather than $38.5 billion.

It shouldn’t be surprising that the actual number wound up somewhat to the left of that. After all, the budget needs to be agreed upon not just by the Republican House, but also by the Democratic Senate and by the President Obama.

Perhaps game theory suggests that the number should have wound up further to the left still, assuming that all sides were negotiating optimally; I’ll leave that as an exercise to the reader.

I would suggest, however, that the outcome of the budget negotiations was not terribly surprising, given how many seats Republicans control in the House and how conservative those Republicans tend to be.

So it’s not surprising that there was strong resistance within his caucus to Mr. Boehner’s original offer. More importantly in the context of the negotiations, that resistance was credible: “only” $32 billion in cuts was already a stretch for many or most Republicans, and Mr. Boehner probably did not have much room, if any, to move further to his left.

Mr. Boehner may have had strong incentives to seek a compromise; he arguably had more reason than either the Tea Party Republicans or the Democrats to avoid a shutdown. And given the way he played his hand, I think you can criticize the White House for agreeing to almost $40 billion in cuts, rather than something like $25 billion instead.

You can certainly also argue that Mr. Obama ought to have argued for a bigger budget than he initially did — call for additional spending and frame it as such — although that would have run afoul of public sentiment: about 45 percent of people thought Mr. Obama’s offer did not go far enough, against just 15 percent who said it went too far. Mr. Obama would have needed to make very heavy use of his bully pulpit to persuade the public of his position.

But the notion that Democrats were going to get a radically better deal, with Republicans having such a large and conservative majority in the House, is probably unrealistic. It’s also conceivable that they would have gotten a worse one — say $45 or $50 billion in cuts — had Mr. Boehner made a bolder offer initially.