Monday was St. Patrick’s Day, and whether or not Americans took part in the merrymaking, they fit into three main categories:

Just who has Irish roots is a trickier question than you might think. Case in point: If you wanted to make a list of U.S. presidents with Irish ancestry, it could range from 10 to 22.

So how many Americans can trace their lineage back to Ireland? Getting a good estimate required extracting data from an enormous PDF containing 150 years’ worth of census records. We looked at how many Irish people immigrated to America each year. Then we calculated how, over the long term, they would affect the size of the U.S. population (the formula is called the “rate of natural increase” and is basically the ratio of births to deaths).

We estimate that 27.6 million Americans are Irish or have Irish ancestry — about one in every 11 Americans. Our analysis also allows us to see how U.S. and Irish demographic paths could have been very different.

The chart below shows what U.S. population growth from 1820 and onward would have looked like had Irish immigrants never come to the country. 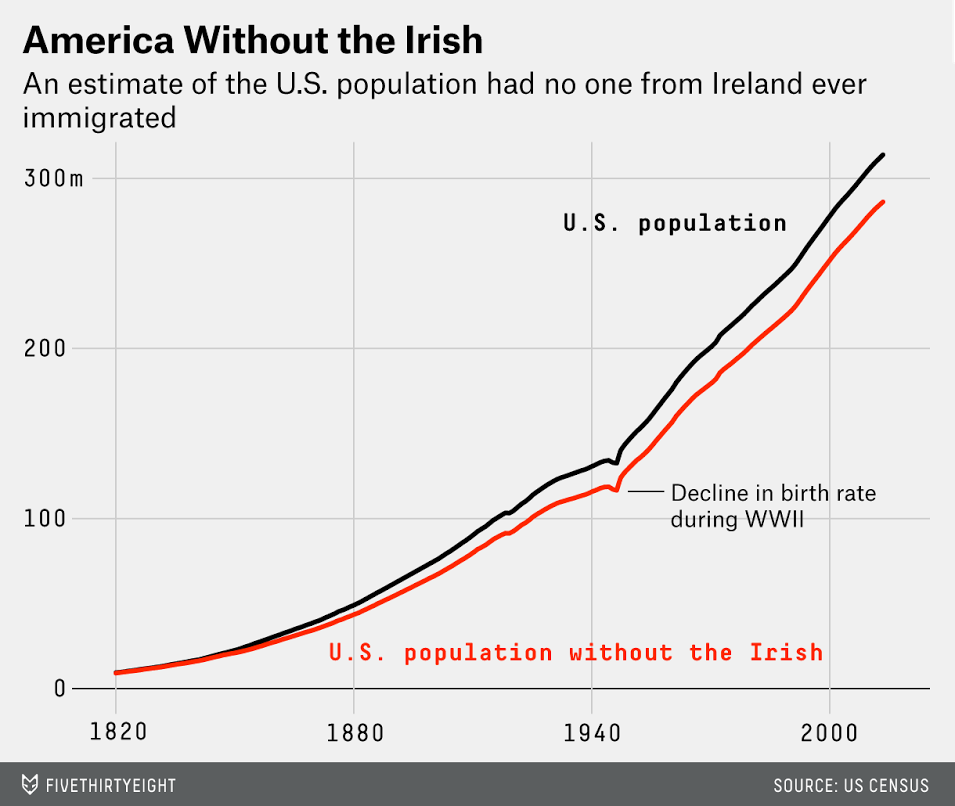 If that doesn’t look shocking, it’s probably because the scale here is vast. Imagining 27.6 million fewer Americans is like imagining the U.S. without Rhode Island, New Mexico, South Carolina and New York.

There’s also another way of imagining just how much Irish immigration changed the course of history. We could look at what Ireland would look like today if no one had moved to America. Because Ireland is fairly small in terms of land area, those extra 27.6 million residents would have a disproportionally greater impact on elbow room (technically speaking, people per square mile). Instead of having 213 people per square mile, 850 people would have to be squeezed into the same space (the effect on U.S. space would be less dramatic if the Irish never came, dropping from 83 people per square mile to 75).

As a point of comparison, 34.1 million Americans (10.1 percent of the population) say they have Irish ancestry, according to the census. That’s not too far off from our number, 27.6 million Irish-Americans, and self-reported data can be unreliable. Still, there’s inherently a lot of uncertainty in these projections, as there always is about a hypothetical world.