Following is a summary of some key exit polling metrics from among the five states in which John Edwards competed (using the term ‘competed’ liberally in the case of Florida). 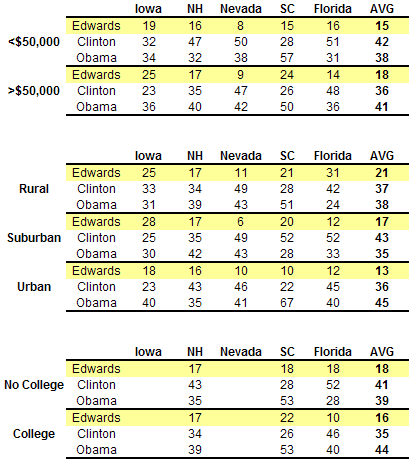 A couple of things to call your attention to.

Firstly, John Edwards actually performed slightly better among voters making more than $50,000 per year than among those making less.

Secondly, while we only have this data available in three states, there was no real difference in the education levels of Edwards supporters.

Thirdly, in every state where we have data available, Barack Obama performed significantly better than Edwards among voters making less than $50,000 per year, and among voters who did not attend college. This held true in racially mixed states like Florida, as well as extremely white states like Iowa and New Hampshire.

Fourthly, in every state where we have data available, Hillary Clinton performed significantly better than Edwards among voters making less than $50,000 per year, and among voters who did not attend college.

To the extent that Edwards had a demographic base, it was not determined by class lines but rather by geography: Edwards performed better in rural areas than he did in the suburbs, and better in suburbs than he did in the cities. But really, John Edwards didn’t quite have a base: there was no commonly-identified demographic group amongst which he had a plurality, yet alone a majority of the Democratic vote.

This is not to disparage John Edwards. He had the misfortune of running against two All-Star level candidates who would probably have had the stage to themselves in any other year. To the extent he had a strength, it was among rural voters, and that could be helpful to Barack Obama in Kentucky, which among other things is quite rural.

There is no absolute measuring stick against which to gauge a candidate’s performance with a particular demographic. If Hillary Clinton had run against John F. Kennedy, she would have gotten her ass kicked among New England Catholics. Does that mean that Hillary Clinton would have had a Catholic problem?