It is unclear, however, whether the running counts provided by the Star Tribune and Secretary of State are any longer providing useful information. This is because the percentage of challenged ballots has now reached epidemic levels. Among the relatively small number of ballots added today to the Secretary of State’s nightly estimate, the Coleman campaign challenged 14.2 ballots for every 10,000 cast, and the Franken campaign 12.2 for every 10,000 cast. This rate of challenges was almost twice that observed in Friday’s counting, and 4-5 times as much as in the first two days of ballot counting on Wednesday and Thursday. 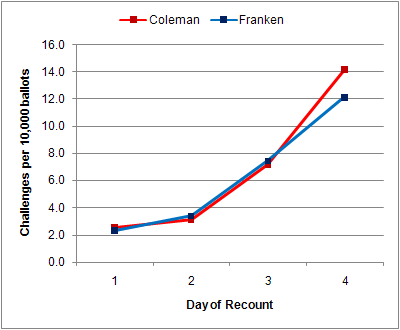 With the rate of challenges running this high, it may be impossible to glean whether either side is in fact making progress in the recount.

Suppose that there is some relatively large number of cases in Hennepin County (which Franken won by 100,000 votes on Election Day) in which ballots regarded by the optical scanners as undervotes in fact show some indication of voter intent for Franken. However, these ballots run along a spectrum from those where the ballot is completed almost perfectly, to those where there is only the faintest indication of voter intent. If the Coleman campaign is challenging virtually every instance in which an election judge rules that there was in fact voter intent for Franken, and the Franken campaign simultaneously is challenging virtually every instance in which the judge rules that there was not clear enough evidence of voter intent, then both sides will rack up high numbers of challenges. All of these ballots, for the time being, are being reported as non-votes. When the canvassing board evaluates them in December, however, only Franken can gain ground, as they will either be ruled to be legitimate votes cast for Franken, or will continue to be regarded as non-votes.

The reason I bring this up is because almost all of Franken’s advantage on Election Day came from three large counties — Hennepin (Minneapolis), Ramsey (St. Paul) and Saint Louis (Duluth). In two of these three counties, however — Hennepin and Saint Louis — Coleman rather than Franken has thus far gained ground in the recount, by 30 and 22 votes respectively. In Ramsey County, on the other hand, Franken has gained a net of 35 votes — but the rate of challenges has been much lower in Ramsey County because of a gentleman’s agreement in force between the two sides to avoid frivolous challenges.

What I am suggesting, in other words, is that Ramsey County, with its lower rate of challenges, may represent the more natural state of affairs, and that Franken is in fact likely to gain quite a bit of ground in Hennepin and Saint Louis counties once challenges in those jurisdictions are resolved. Remember, either Coleman or Franken may wind up challenging potential Franken undervotes, depending on the initial ruling of the local elections judge. Likewise, either Franken or Coleman may wind up challenging potential Coleman undervotes.

Of course, there may be other areas in which Coleman is likely to gain ground. Franken issued 51 challenges to Coleman’s 7 in Meeker County, for instance, a relatively small county won by Coleman on Election Day, and 26 challenges to Coleman’s 11 in Mille Lacs County, which also went for Coleman. Almost certianly, a large percentage of Franken’s challenges in these counties are frivolous.

Minnesota’s recount, generally speaking, has gone smoothly, and is a model for how other states should adjudicate their recount process. I believe, however, that Minnesota has made a significant mistake by reporting all challenged ballots as being non-votes until the canvassing board has a chance to rule on them. This creates a strong incentive to issue frivolous challenges, one which both campaigns have apparently wised up to. A better way to report the results would be to list the ruling of the local elections official as the default; this would provide for a more honest indication of those cases where the canvassing board in fact determines to overrule the judgment of the local official. Alternatively or additionally, the state could disincentive frivolous challenges by providing photocopies of all challenges online, making them subjects of potential ridicule.

Until such time as the the state changes its reporting process, or the incidence of challenges drops to a healthier level (such as was observed on Wednesday and Thursday), the running counts reported by the Star Tribune and the Secretary of State should be taken with a huge grain of salt.