The arrest of Minnesota Vikings halfback Adrian Peterson, who is accused of abusing his 4-year-old son while disciplining him with a switch, has rekindled the long-running debate about corporal punishment. There haven’t been any public opinion surveys that have asked specifically about the Peterson case. Nor has there been consistent polling of American attitudes on the use of switches. But polls consistently show most Americans believe spanking is an appropriate form of discipline, although it varies by party identification, race, region and religion.

Since 1986, the University of Chicago‘s General Social Survey (GSS) has asked respondents, “Do you strongly agree, agree, disagree or strongly disagree that it is sometimes necessary to discipline a child with a good, hard spanking?” (For this article, I have merged the responses “strongly agree” and “agree,” as well as “strongly disagree” with “disagree.” I have also eliminated the responses in which people said they were unsure, though only 1.5 percent in the sample gave this answer).

Here’s support for spanking by year. 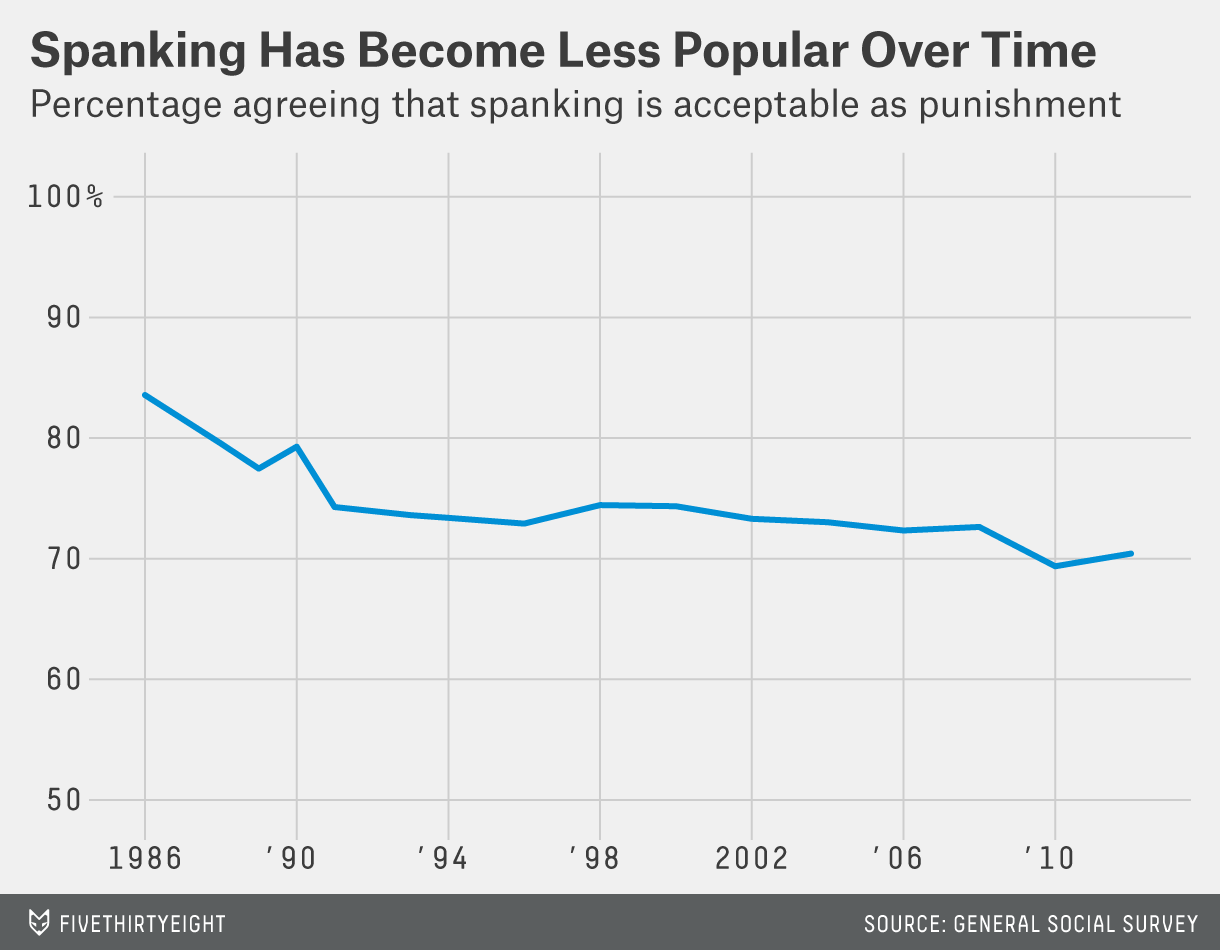 The pro-spanking bloc has slipped from about 84 percent in 1986 to about 70 percent in 2010 and 2012. That’s still a majority, but spanking has become less socially acceptable over the past three decades.

That drop, however, isn’t because younger people are more likely to be anti-spanking. Since 1986, there hasn’t been much of a difference in the opinions of different age groups in any given year, according to the GSS. The few spikes and valleys in the data are more indicative of sampling error than anything else.

There is a large gap when it comes to religion. The subsample on religion has been included in the GSS only occasionally, yet there is a clear divergence. Born-again Christians are, on average, 15 percentage points more likely than the rest of the population to agree that spanking is an acceptable form of punishment. 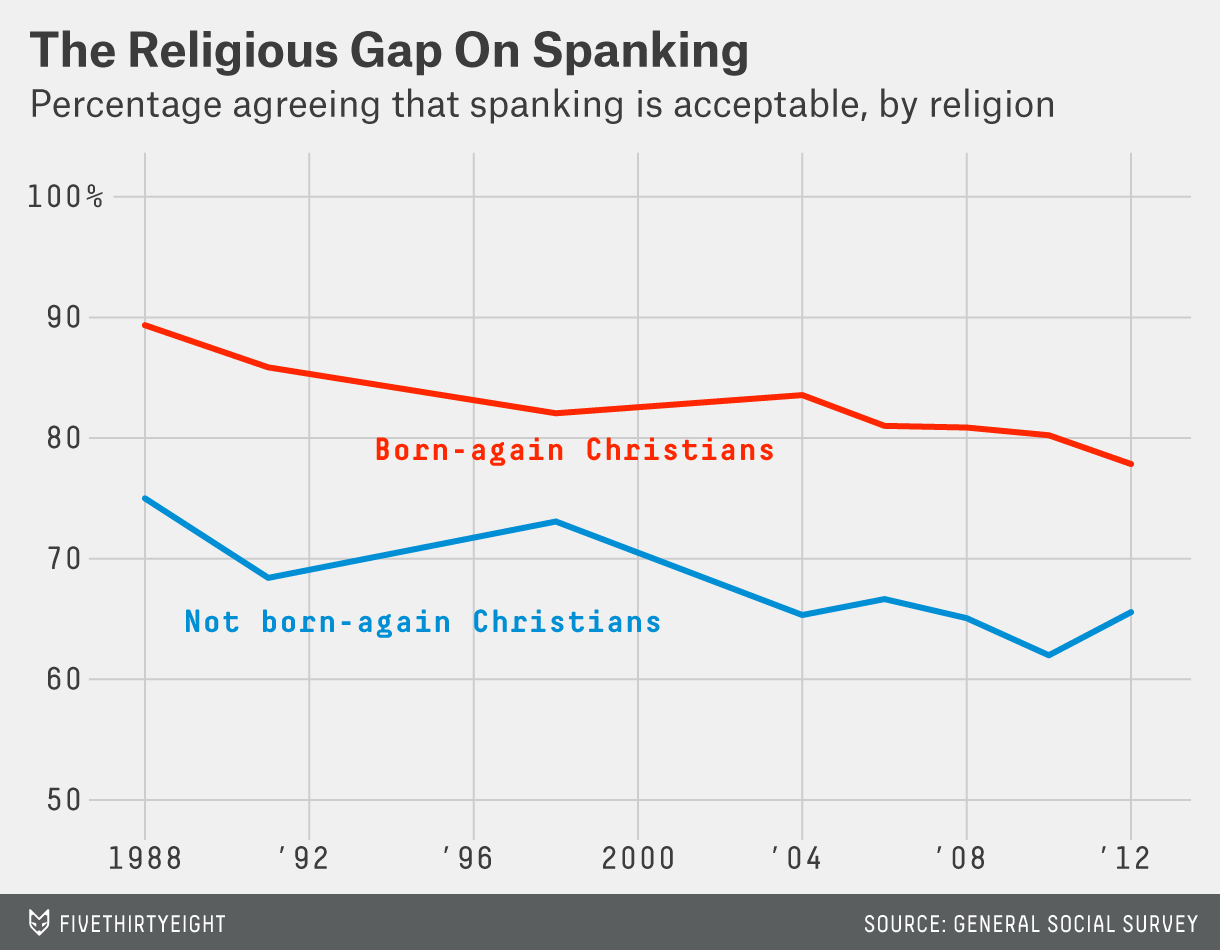 Over the past 10 years, 80 percent of born-again Christians have said spanking is OK. Support among the rest of the population has been about 65 percent. As the U.S. becomes less religious, it’s possible that the percentage of those who favor spanking as a form of punishment will drop further.

Another gap exists between racial groups. Whites (including Hispanics) have been, on average, 11 percentage points less likely than African-Americans to favor corporal punishment. 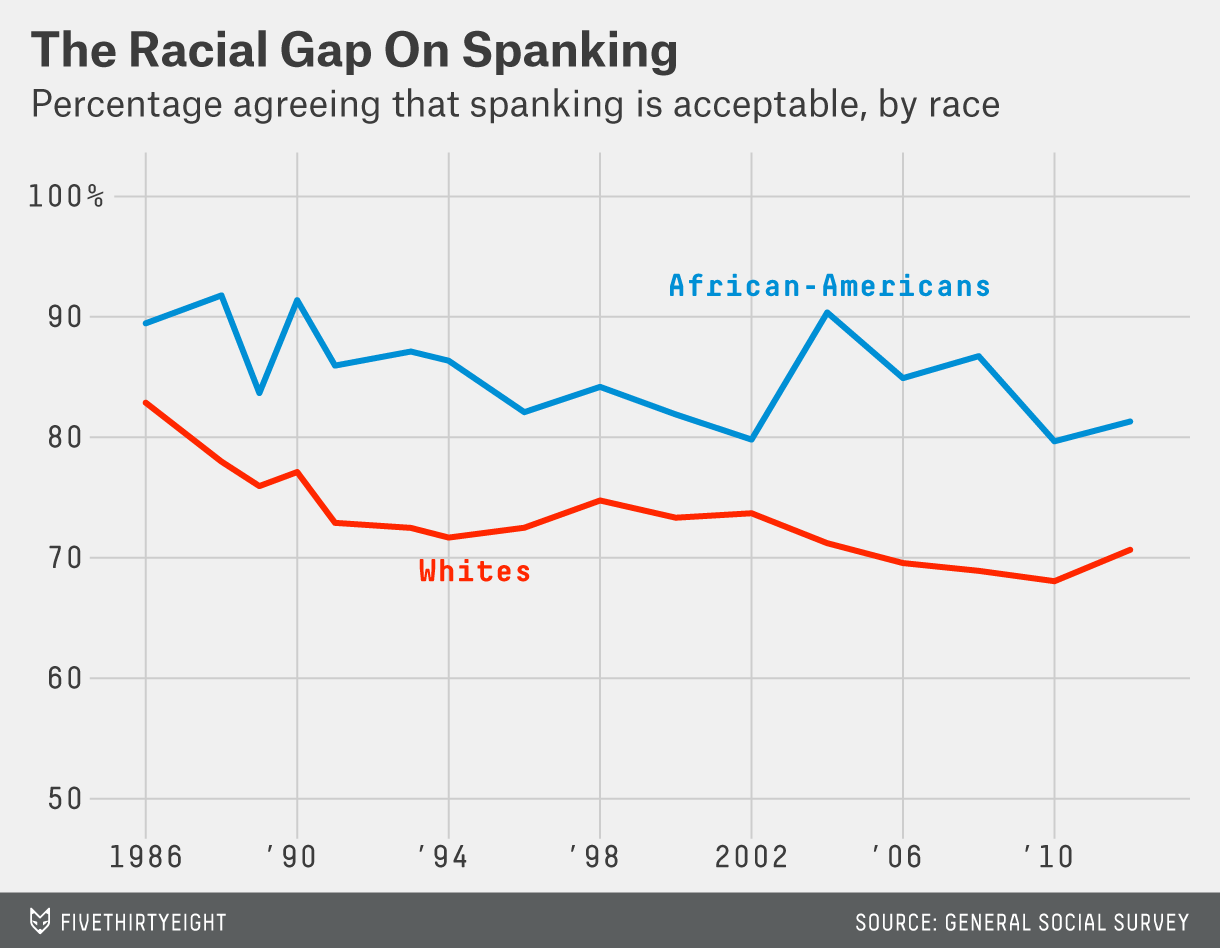 And though the sample size makes it irresponsible to chart by year, non-whites and non-blacks (e.g. Asians, Native Americans, etc.) are, on average, 5 percentage points less likely than whites to approve of spanking.

Given the racial and religious disparities, it’s not surprising that there are large regional differences as well. 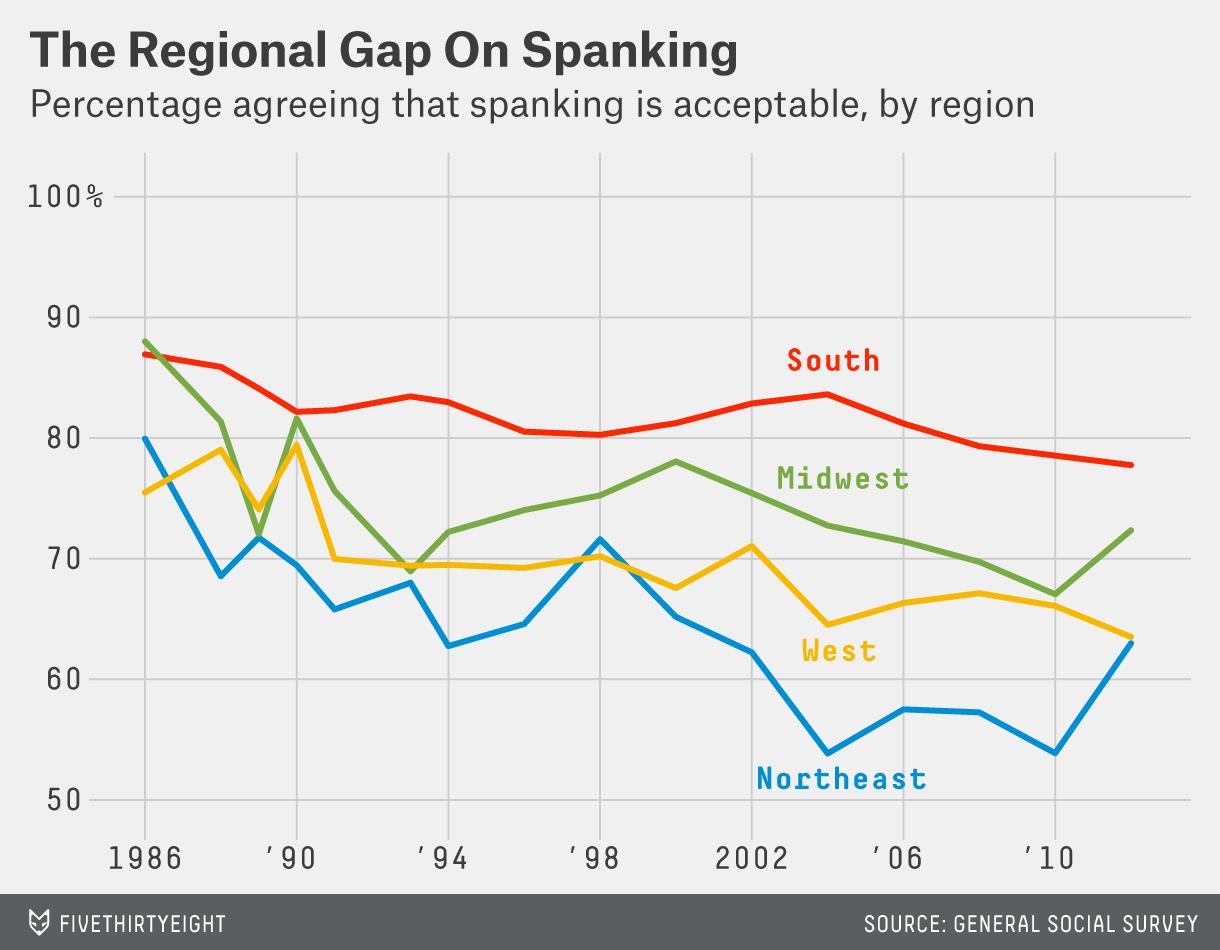 There are also big differences among Democrats, Republicans and independents. 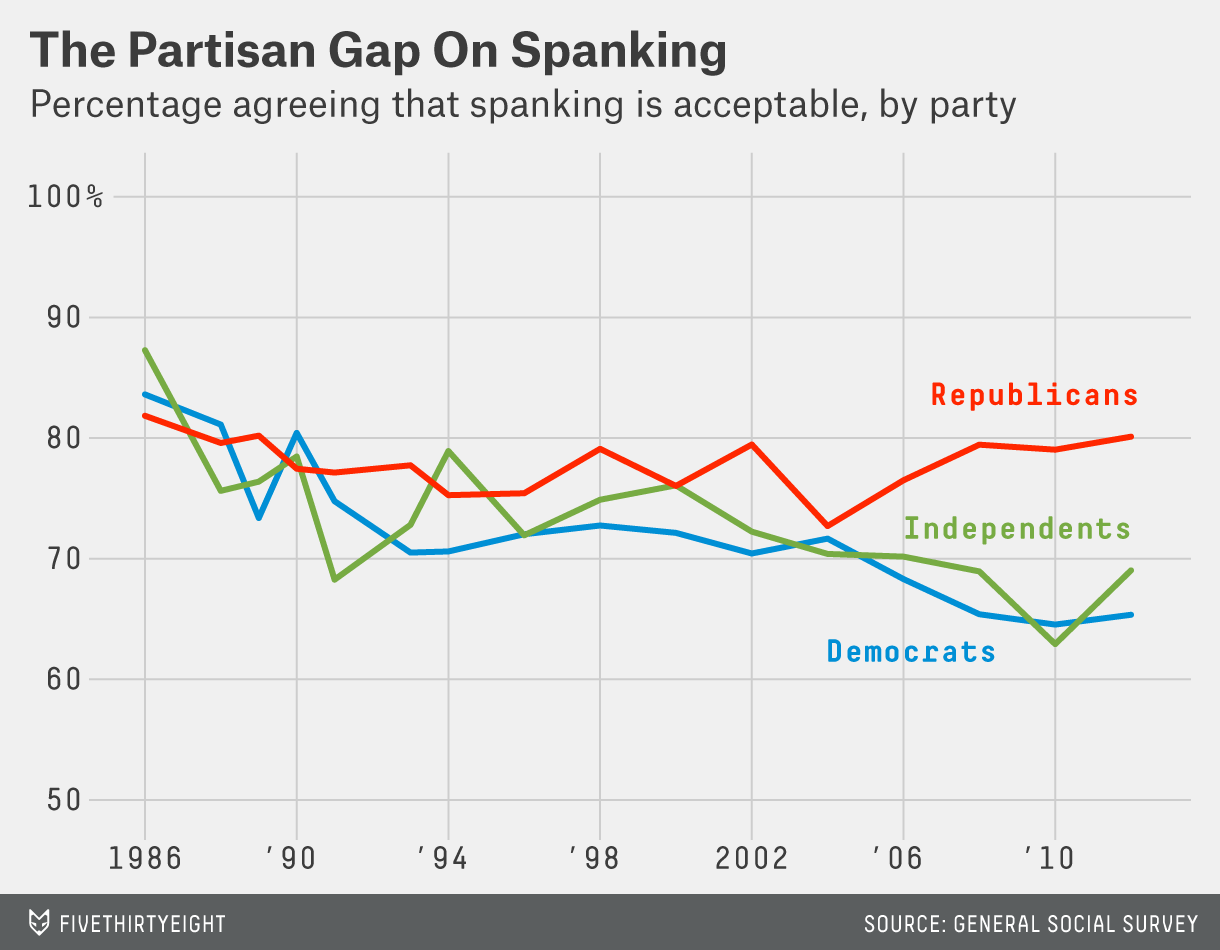 Republicans are more likely than either Democrats or independents to favor spanking. And that gap has become wider over time. Since 2008, 65 percent of self-identified Democrats have been in favor of spanking, while 80 percent of Republicans have been.

There’s some overlap here, obviously. There are a lot of Republicans in the South, for example, so saying the South favors spanking and Republicans favor spanking is somewhat redundant. But all of the differences in these charts hold, even when controlling for the variables in the other charts. That is, put each of these variables into a regression, and it shows that the differences are real — the South, for example, isn’t more pro-spanking than the Northeast simply because there are more Republicans in the South.