We’ve made it to Christmas week, and it’s a magical time of year. But it’s weeks earlier — around the time the festive drinks arrive at my local Starbucks — that I start brimming with excitement and anticipation about spending time with family and friends. And then I find myself in line behind 25 people at the mall, when even streaming David Sedaris’s “Santaland Diaries” on my iPhone doesn’t make me smile.

Gallup’s U.S. Mood Index shows that the actual holidays — Thanksgiving and Christmas Day — are two of the happiest days of the year. In 2013, 70 percent and 64 percent of respondents, respectively, said they felt a lot of happiness and little worry each day. But on an average day during the rest of the year, 48 percent reported feeling a lot of happiness and little stress.

We’ll take this as a sign that people in general are enjoying “happy holidays.”

What makes our holidays happy? A Pew Research Center survey from the same year asked Americans what they like most about the season. Being with people they care about tops their lists (and it’s at the top of mine). Sixty-nine percent of people said they most enjoy time with family and friends. Eleven percent said they most look forward to religious reflection, and 7 percent said their favorite thing is that people are happy and joyful.1

That’s all in contrast to the paltry 1 percent of Americans who cite shopping as what they enjoy most. In fact, Americans’ top three answers about what they like least about the season involve purchases. Thirty-three percent of respondents listed commercialism/materialism as their primary dislike. Financial worry was No. 2 on the “naughty list,” with 22 percent of people saying it’s the worst part of the holidays. Ten percent cited shopping and crowds.

But do people put their minutes where their mouths are? Do we actually spend our holidays on the activities that make us happy? If not, what are we doing with our holiday time?

The Pew Research Religion and Public Life Project has explored how people mark the holidays. It found that 86 percent of Americans plan to attend a gathering of family or friends on Christmas Eve or Christmas Day; 86 percent plan to buy gifts for family and friends; 79 percent say they’ll put up a tree; 65 percent aim to send holiday cards; and 16 percent plan to go caroling. Here, the data points to a lot of people focusing on the less-enjoyable activities — spending money on must-dos, for example — perhaps in an effort to build up to the “perfect” holiday.

Academic research on well-being and holidays offers plenty of information about why certain factors make us feel healthy and happy, or tense and unhappy. Hormones can account for a lot of this. Spending time with people we feel connected to can cause increases in serotonin, the happiness hormone. The nerve-racking aspects of holiday preparations and ancillary obligations can heighten levels of cortisol, the stress hormone.

To get an even clearer picture of how such activities affect happiness, we can look at how many adults are engaged in an activity on an average day during the holidays and how much time they are spending on it relative to the rest of the year. The American Time Use Survey asks a nationally representative sample of people to record how they spend their time every day. Because reports of time use are dated, we can watch patterns of activity change throughout the year. For our analysis, we combined data from November and December for the years 2010 through 2013.2 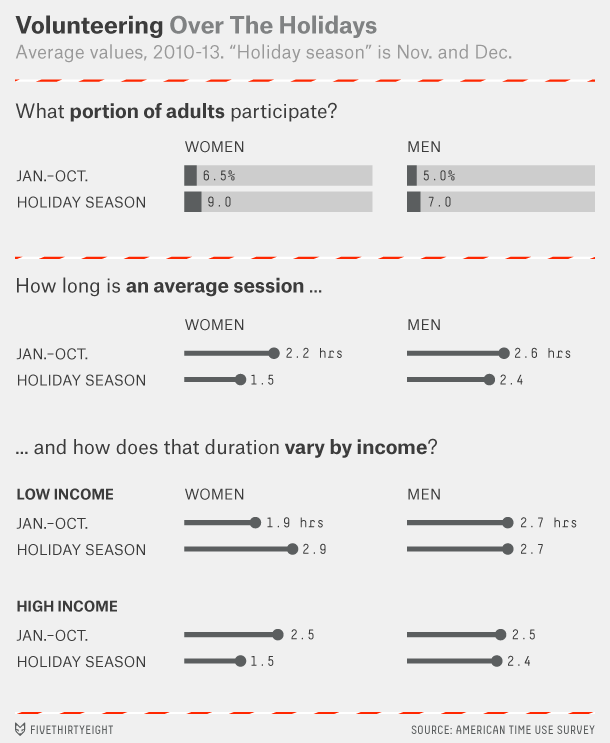 Women with the highest incomes spend, on average, less time volunteering on the days they participate. There’s an increase in hours among the lowest income women. There are no significant changes for men along income lines. 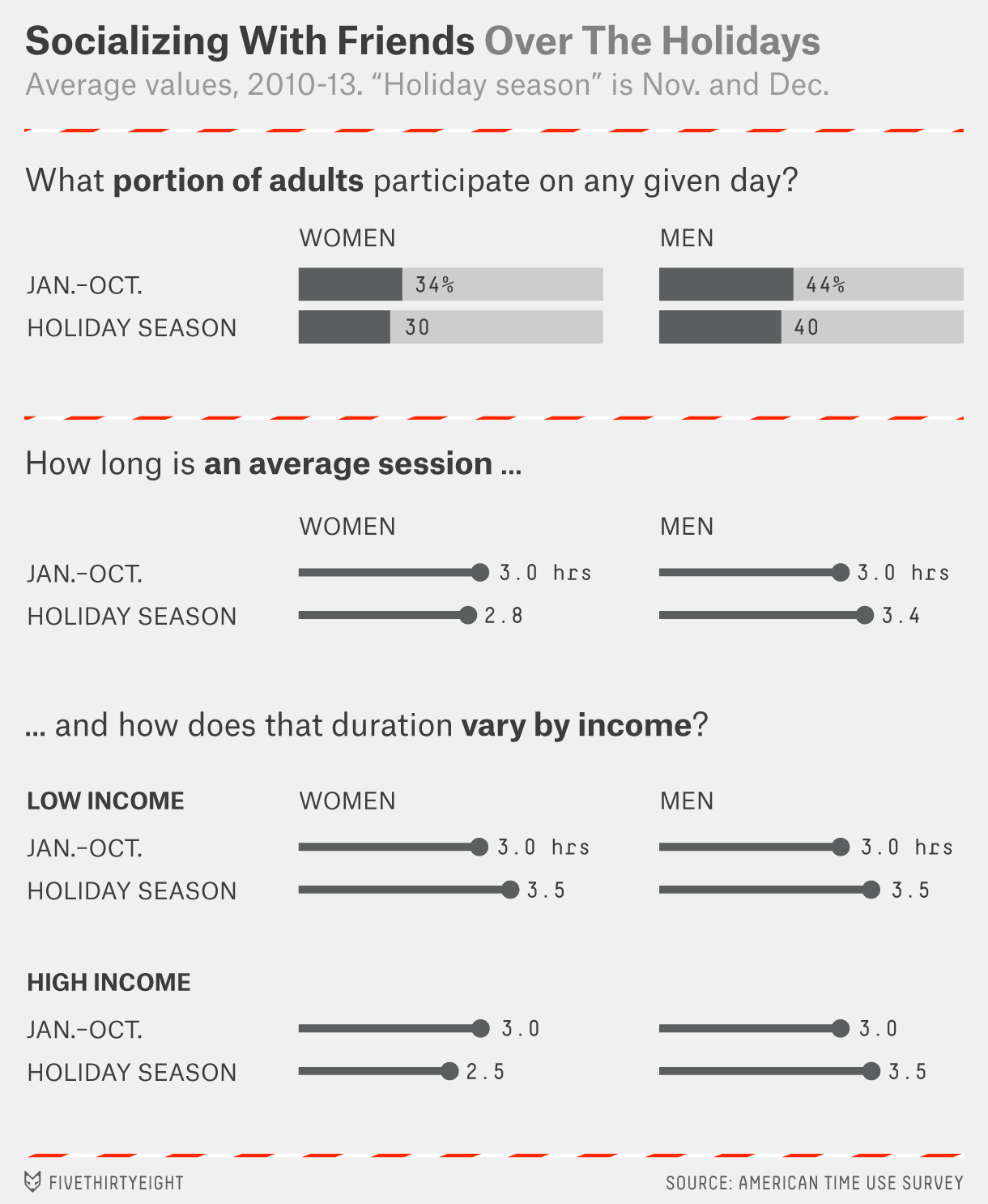 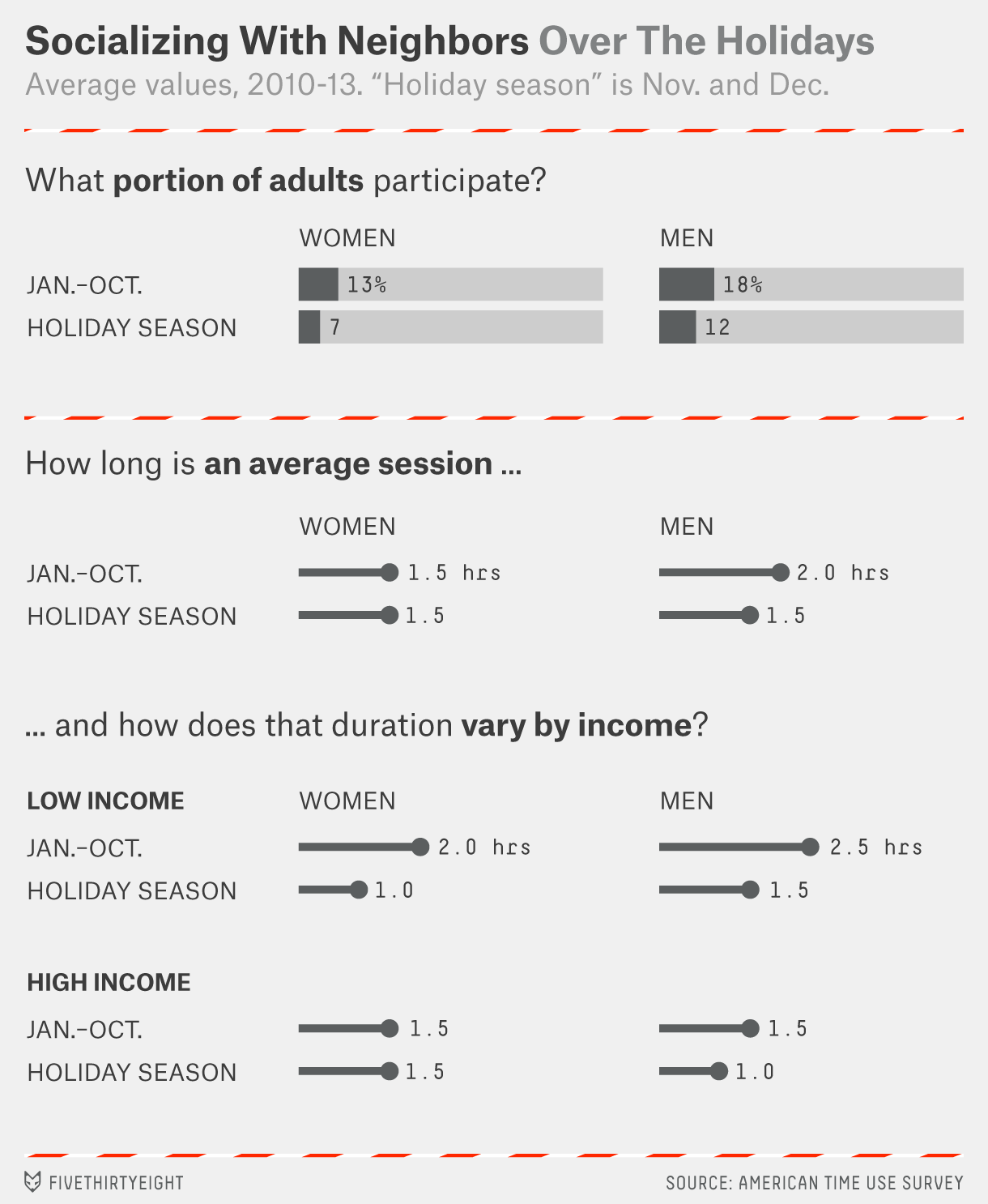 So, despite what Americans say they enjoy about the holidays, their time-use data doesn’t show big increases in time spent with friends and neighbors during the holiday season.

Perhaps Mom and Dad, and the in-laws, are monopolizing their time? Indeed, the biggest change in social behavior we found was in the time adults spent socializing with parents who do not live with them. Most of the year, about 18 percent of women and 15 percent of men socialize or eat with their non-household parents. But during the holidays, nearly double the percentage of women and about the same percentage of men do; women also spend nearly four hours on the days they do, up from about an hour during the rest of the year. Men jump from about one hour to a full two hours. 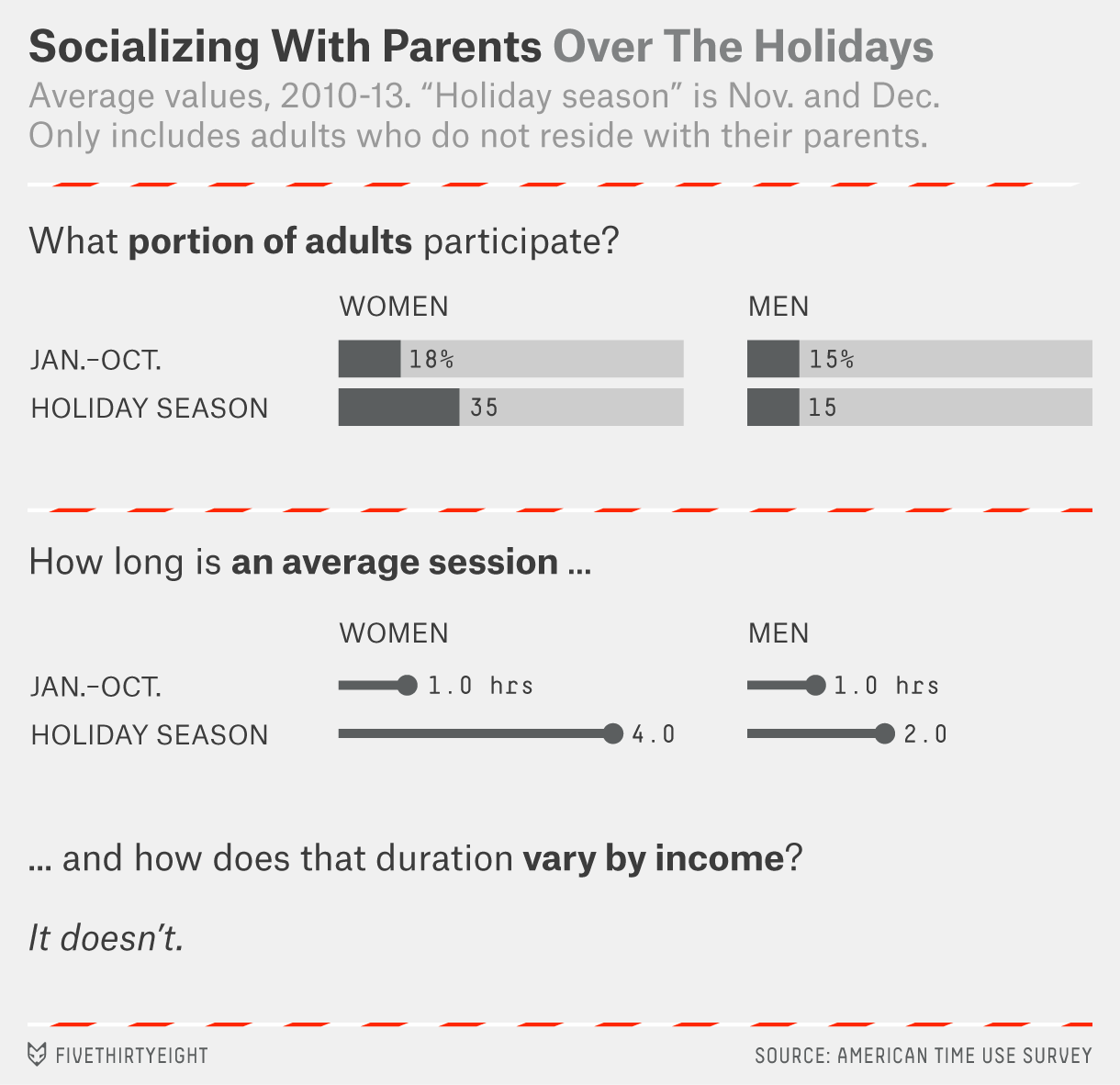 This one’s a no-brainer: The percentage of adults who spend their hard-earned money increases toward the end of the year. 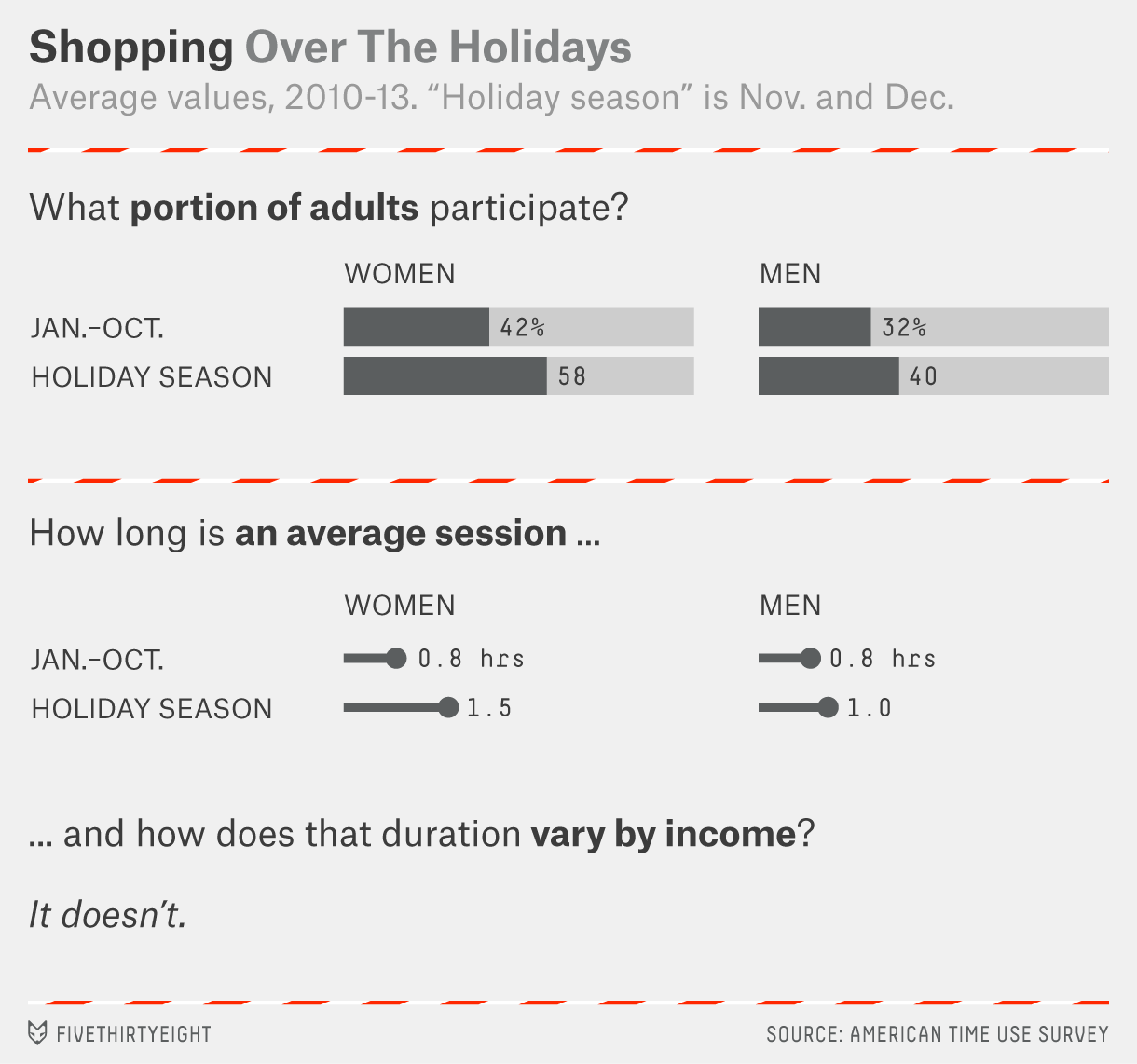 The amount of time spent by women doubles to at least an hour and a half on the day they are shopping. For men, the increase is much smaller. Income does not seem to play a significant role in time changes to shopping patterns during the holidays.

There’s no specific category in the American Time Use Survey for setting up a Christmas tree, a menorah or other decorations. The closest we can get is to look at “interior decorating.” 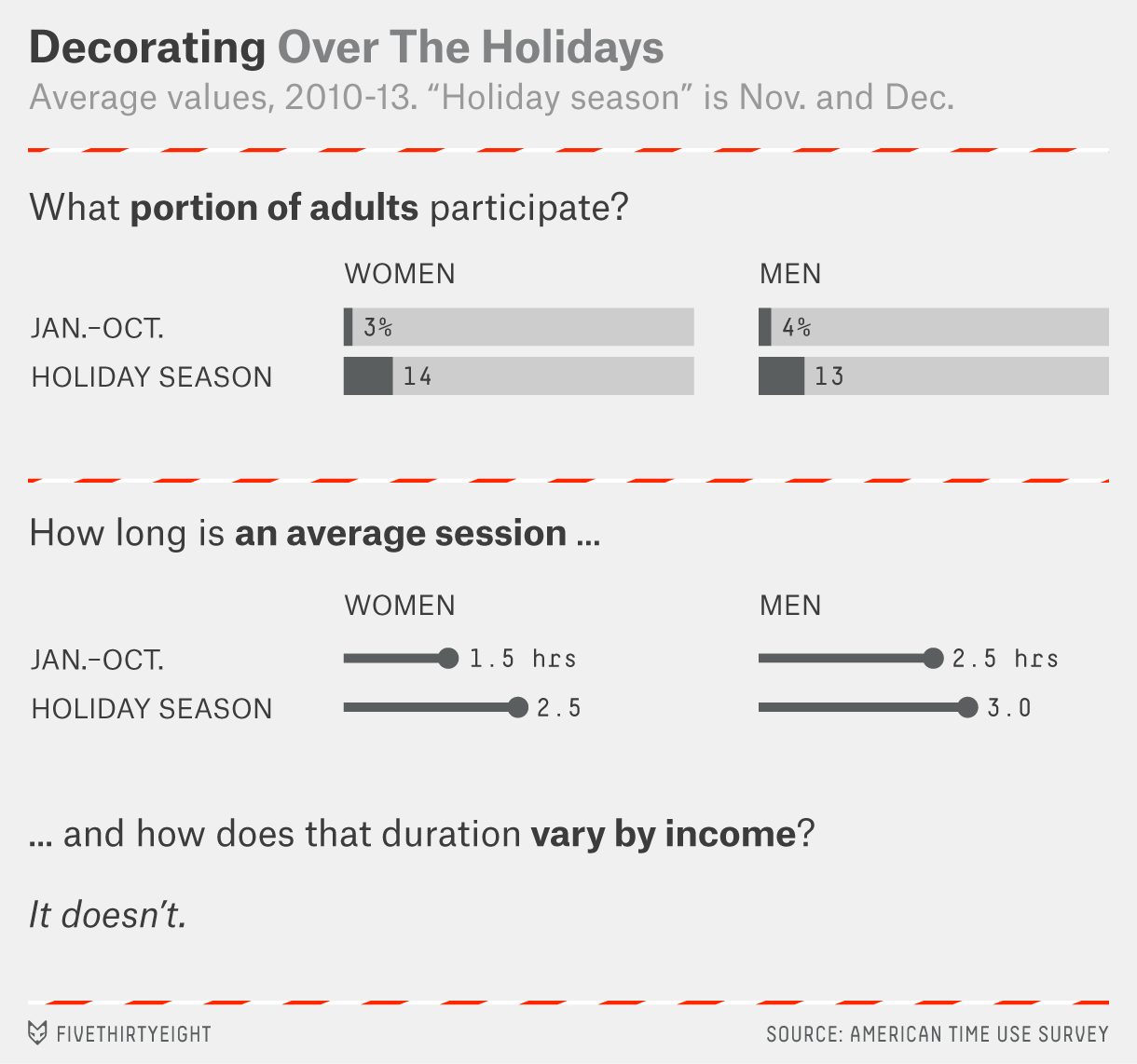 On the days they decorate, women increase their time spent more than men do. That’s supported by this year’s Pew research, which shows that 56 percent of women compared with only 36 percent of men enjoy decorating for the holidays “a lot.”

Involvement in religious activities doesn’t vary much between the holidays and the rest of the year: Seven percent of men and 11 percent of women say they participate on an average day, and for those folks, there’s no significant change in time spent. 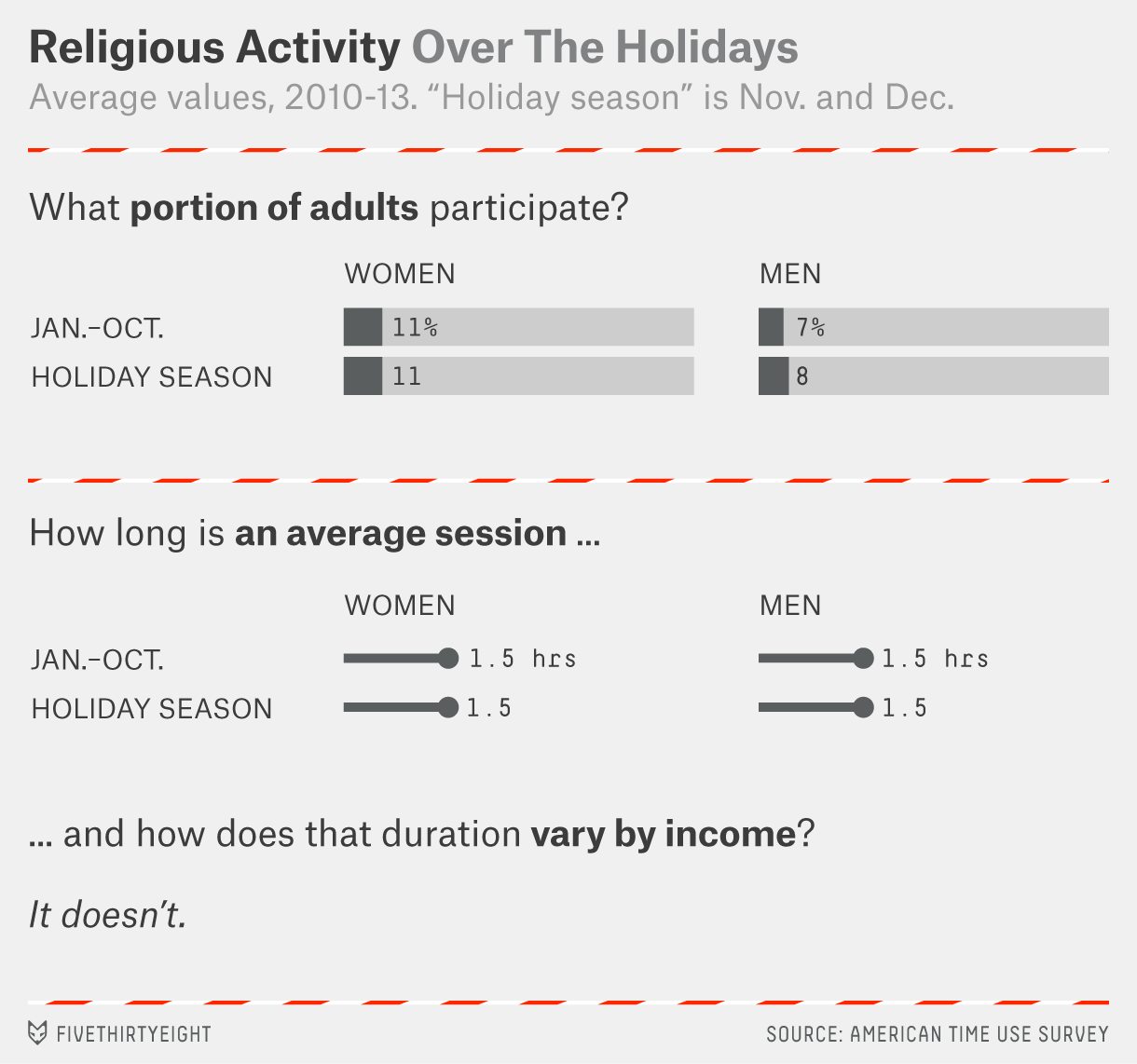 Among individuals who do not regularly attend religious services, only 10 percent say they look forward to attending religious activities during the holiday season.

Americans spend increased time on stressful activities they claim to dislike, and decrease time spent on activities they say make them happy. And there is a relationship between these changes. When the data is explored to see how the different activities are related to each other, it becomes clear that increases in time spent shopping are statistically correlated5 to decreases in time spent eating and socializing with friends and neighbors. People are not spending more time on both, but rather seem to be choosing one activity over the other. We are actively replacing things that make us happy with things that make us stressed! This relationship is found only in the data from the holiday season. Looking at the data from the non-holiday year, we do not find these correlations.

In terms of how happy and satisfied people feel, research has shown that participation in holiday traditions and rituals is highly satisfactory and increases positive well-being. The more people enjoy a ritual, the greater their contentment during the holidays. And the more frequently people engage in holiday traditions, the less lonely they’re likely to feel.

Perhaps we can all make our holiday season happier by developing some low-cost traditions and routines that involve time with friends and neighbors — as well as our families — and avoid crowds and shopping, which lead to immediate stress, as well as future financial stress. Sounds easy enough … right?