Four years after the passage of the Affordable Care Act, Americans are still of two minds about the health care reform law. When pollsters break Obamacare apart, nearly all of the individual pieces are well regarded. But when they ask about Obamacare as a single, hulking policy, it’s derided. Americans trust the parts, but not the whole.

In a March 2014 poll, the Kaiser Family Foundation surveyed 1,504 adults about nine components of the law and found that only the individual mandate lacked majority support. In fact, even among Republicans, all but two of the surveyed elements enjoyed majority support, including the expansion of Medicaid that is at issue in states across the country.

But the law itself consistently has more opponents than supporters. In April 2014, 46 percent of Americans polled had an unfavorable view of Obamacare, while 38 percent had a favorable view. And in a telling indicator, GOP candidates have been using Obamacare in their ads this primary season. Once a law becomes the subject of attack ads, it’s a good bet it’s not overwhelmingly popular.

Today, we take that unpopularity for granted. But the law’s architects cobbled together a complex bill so that everyone could find something to like. Seniors were sure to appreciate that the law closed the “donut hole” in prescription drug coverage. Young adults could stay on their parents’ insurance longer. Those with pre-existing medical conditions could buy health insurance at the same prices as others. The uninsured became more likely to qualify for Medicaid and were now able to buy plans on new insurance exchanges. Seen in that light, the law’s unpopularity is not a fact to be assumed but a puzzle to be explained.

But that puzzle can’t be explained by “death panels” or either party’s messaging on the issue. It also seems unlikely that a substantial share of the opposition to Obamacare comes from those who wanted to see more sweeping health care reforms.

Instead, the public’s disapproval of Obamacare considered as a whole points to Americans’ broader relationship with the government, and our unwillingness to trust that it can accomplish what it sets out to do.

One political scientist, Vanderbilt University’s Marc Hetherington, has been doing work on political trust since before the Obama presidency. His 2006 book “Why Trust Matters” managed to anticipate the country’s response to the 2010 health care law surprisingly well. In it, Hetherington investigated why American public policy has moved rightward since the 1960s even though public opinion hasn’t become markedly more conservative. His answer: There’s been a decline in our trust in government.

During a period of high trust like the early 1960s, Americans were confident that the government could accomplish what it set out to accomplish — and were willing to give it the benefit of the doubt. A War on Poverty? Sign us up, even if we were also trying to put the first person on the moon. And fighting a major war in southeast Asia. In 1966, Chief Justice Earl Warren said that President Lyndon Johnson had been “working hard on Vietnam and has been for a long time. … He will find some way out.” At the time trust was high, and much of the country agreed.

During a period of low trust, however, we might endorse a policy in theory but oppose it in practice because we doubt the government’s ability to make it happen.

Since LBJ’s time, Americans’ trust in the federal government has fallen, though it has rebounded somewhat during periods of economic growth. 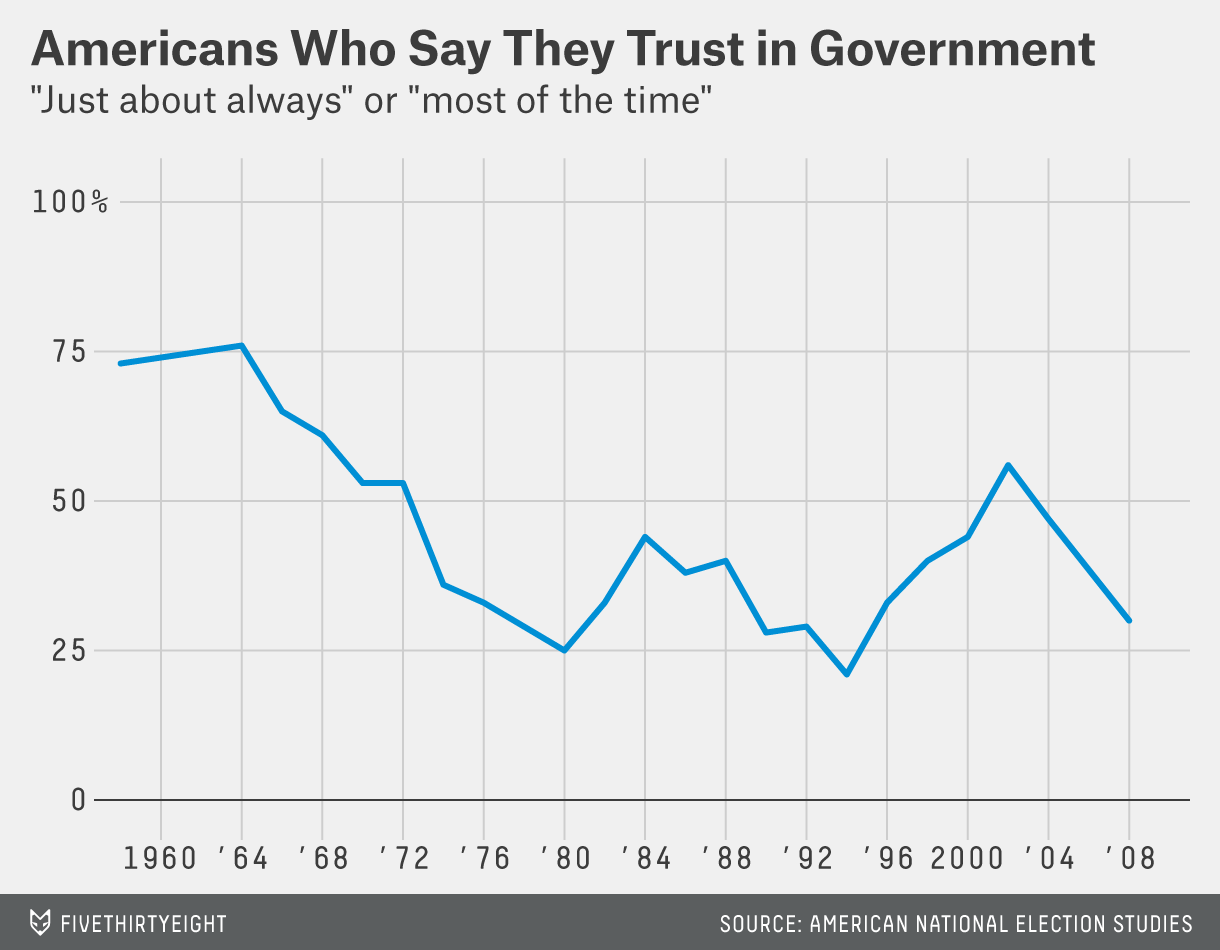 In Hetherington’s view, a lack of trust particularly plagues policies that target disadvantaged populations, as Obamacare’s Medicaid expansion does. Those are the policies that benefit relatively few Americans directly, forcing most people to trust the government to spend the money wisely without seeing any of the effects themselves. Social Security, on the other hand, benefits most older people: Even if you’re not receiving Social Security today, you probably know somebody who is, so it’s easy enough to see if the program is working. You don’t need to trust when you can verify.

In the same vein, we might expect trust to shape public opinion more when assessing policies that are complex amalgams, as Obamacare is. After all, some of the law’s more popular elements aren’t especially complicated (say, young adults staying on their parents’ insurance until age 26, or banning discrimination against those with pre-existing conditions). But as a whole, the legislation is a highly complex balancing act of federal and state policymaking, to say nothing of the insurers, hospitals and other private actors involved.

To test how trust influences public opinion, I fielded a survey using GfK’s nationally sampled online panel in late 2011 with colleagues at Georgetown University. GfK maintains a national online panel recruited via off-line techniques,1 so it includes people from a wide range of places and backgrounds. People without Internet access are in the mix as well.

I asked respondents in the first group whether their views of the “health reform bill signed into law in 2010” were generally favorable or unfavorable. For these respondents, their trust in government — asked weeks beforehand — was a reasonably strong and statistically significant predictor of their attitudes toward health care reform, even accounting for their partisanship, ideology and approval of President Obama (among other things).2 Imagine two liberal Democrats who approve of Obama. One trusts the federal government “just about always” while the other trusts it “almost never,” but that’s the only way in which they differ. The gap between how those two Democrats feel about Obamacare is about a quarter the size of the gap between Democrats and Republicans. Distrusting liberal Democrats were much less favorable toward the health care law than were more trusting liberal Dems.

Other randomly selected respondents received a different version of the questionnaire, one that first asked them to read an anti-Obamacare argument grounded in trust. Specifically, it explained that a senator had recently argued:

Health care is one of the most complicated issues we face. It involves 1 of every 6 dollars spent here in the United States. The health care system includes millions of doctors and nurses and thousands of hospitals and clinics. Together, they regularly make decisions that can mean life or death. The government in Washington can’t even balance its own budget. We certainly can’t trust it to run something as complicated as the health care system.

Sure, this was a hypothetical argument I wrote in the fall of 2011. But similar claims spread across the country in the fall of 2013 after the botched roll-out of HealthCare.gov, the federal portal to insurance coverage under Obamacare. And they have been a staple of arguments against government programs for decades.

For the respondents who read the senator’s argument about trust, the relationship between their trust in the federal government and health care attitudes nearly doubled as compared to those who hadn’t read the argument. Imagine two more respondents, both of whom are again strong Democrats and ideologically liberal. Before the survey, one said she trusted the government “just about always,” and the second said he trusted the government “hardly ever.” After hearing from the distrustful senator, the trusting respondent is predicted to assess health care reform at a 3.31, where 3 is “somewhat favorable” and 4 is “very favorable.” But her low-trusting counterpart comes in at 2.78, between “somewhat favorable” and “somewhat unfavorable.”3 In the earlier case with no argument about trust, the trust gap was 0.30, and now it’s grown to 0.53. That’s a big difference on a four-point scale given that we’ve held partisanship, ideology and even approval of Obama constant. In fact, it’s now almost half the average difference between Democrats and Republicans.

Trust matters. It matters above and beyond partisanship, above and beyond ideology. And it’s especially important in an environment where politicians are explicitly talking about trust. In other words, Americans’ distrust of government can become a political weapon. The experiment suggests that appealing to distrust provides an avenue for the GOP to bring untrusting Democrats closer to their vantage point.

In today’s politics, low trust in government seems to work primarily against the Democratic Party, which is both in control of the presidency and has a more activist domestic agenda. But it’s not hard to imagine how low trust could undercut GOP policy goals, too. If the government isn’t trusted to implement insurance exchanges, it might also be hard to trust it on capital punishment, or to rebuild a foreign country. Ironically, low trust might prove a barrier to a policy like privatizing Social Security. Low trust could even make it difficult to balance congressional leadership with a conservative constituency (see Cantor, Eric).