American leaders have condemned Russia’s military incursion into Ukraine. The conflict — which has strained relations between the former Cold War adversaries — is unfolding with American feelings toward Russia and its president, Vladimir Putin, already at a nadir.

But it’s worth remembering that Putin and Russia were once quite popular in the United States. That was a long time ago, at the start of Putin’s first reign as Russia’s president, from 2000 to 2008. 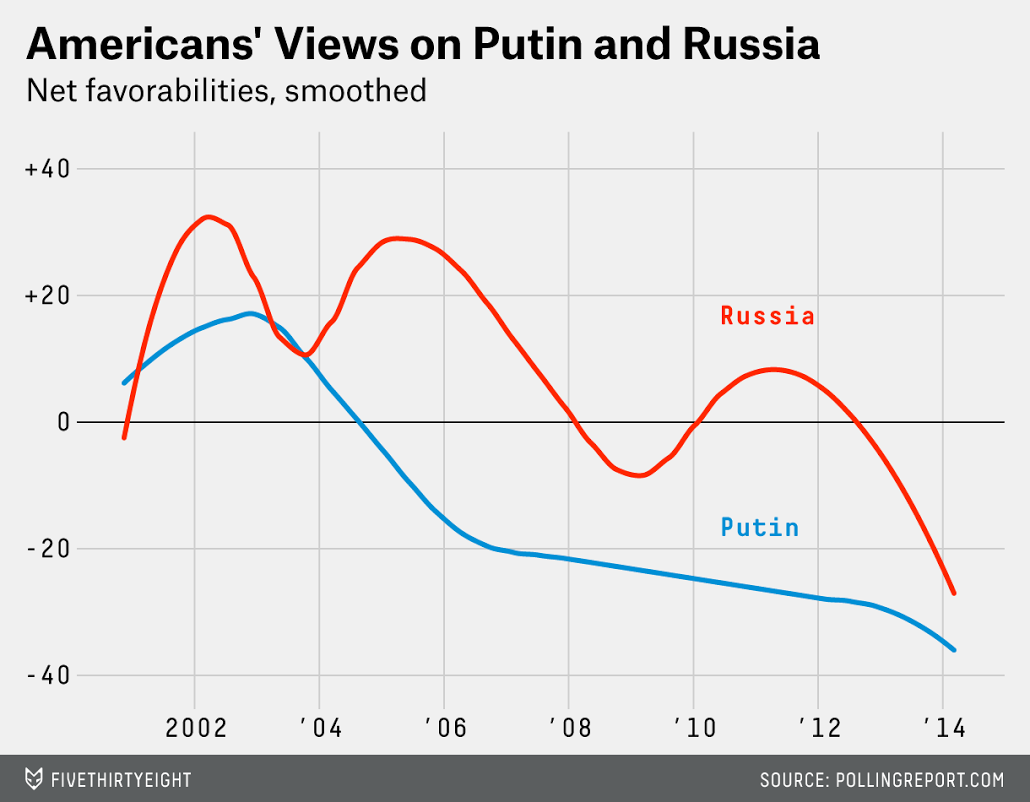 After the attacks of Sept. 11, 2001, Americans grew fond of Putin, who had offered assistance to the United States in the global war on terror. Russia also enjoyed a surge of American affection in the wake of 9/11: The country’s net favorable rating (favorable minus unfavorable) among Americans was negative 13 percentage points in November 2000 (this doesn’t show up in the chart because the data is smoothed out). Russia’s net favorable rating then shot up to nearly 40 percentage points by February 2002.

The relationship soured with Putin’s unwillingness to back the American invasion of Iraq in 2003, and his net favorable rating was cut in half after the war started. By 2006, it was underwater. Americans’ attitude toward Russia suffered as well, eventually dipping into negative territory by 2008.

Opinions of Russia rose slightly during the one-term presidency of Dmitry Medvedev from 2008 to 2012. As late as the beginning of 2012, the percentage of Americans with a net favorable view of Russia managed to creep toward +10 in Gallup’s polling.

Putin regained the presidency in May 2012, and within a year surveys showed American views of Russia falling to -6 points. In Feb. 2014, Russia’s net favorability was -26 percentage points. Putin’s net favorable rating hit an all time low of -44 points the same month. That’s 64 percentage points below its peak in 2002. It has fallen farther since Russian troops moved into Crimea.

And with the on-going conflict in Ukraine, I’d guess Americans’ feelings toward Putin and his country haven’t hit rock bottom yet.