Growing up in England, I attended a school where administrators thought it was a good idea to teach two dozen rowdy 14-year-old girls “food technology.” This turned out to be a euphemistic mantle given to a cooking class in which we whiled away the hours (all 30 of them) weighing our ingredients, and often our heads and elbows, before singeing one or more of the aforementioned.

It was, in my opinion, a total waste of time. So I was curious what the school year has in store for the children around the world who are returning to class this week. (According to the Organization for Economic Cooperation and Development, most developed countries have academic years that begin in September and end in June.) Pew Research Center took data on the average number of required hours from the Education Commission of the States and compared it with similar data from other countries using an OECD report published last summer. Totting up the hours, it’s no wonder my colleague looked so confused when I mentioned my languorous school years — Americans are required to put in more classroom hours than I ever did. 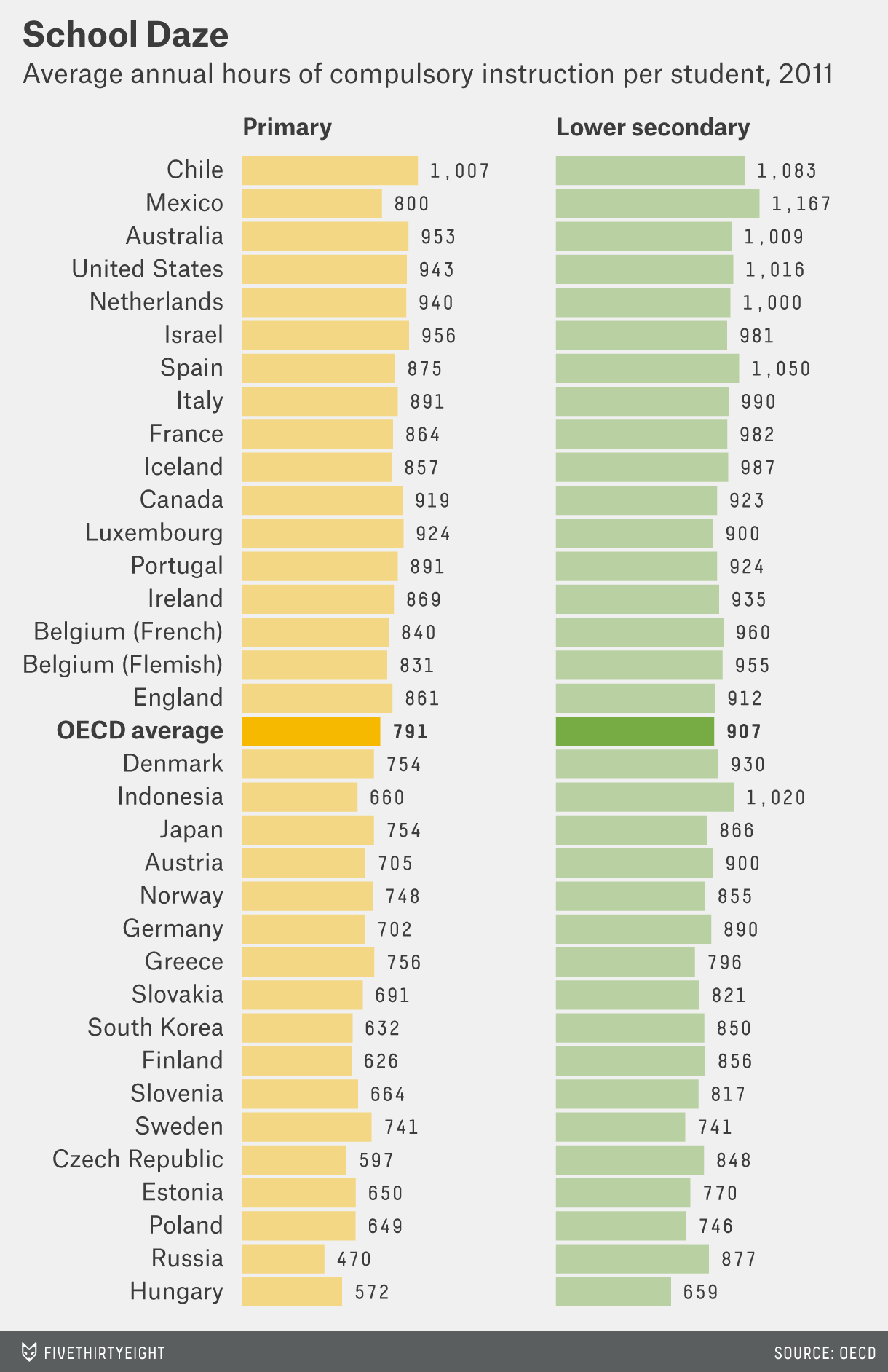 Only in Chile, Israel and Australia do elementary school students spend longer in class each year than their U.S. counterparts. In lower-secondary school (defined as starting six years after primary education and lasting three years, so about the equivalent of middle school in the U.S.), the average year in America lasts 1,016 hours, or for 42 continuous days, longer than in most other developed countries. When we combine primary and lower-secondary school hours, the U.S. ranks fourth of 34 countries.

The standardized national numbers in this chart can obscure important variations in each of those countries’ classrooms. In the U.S., for example, not all states count what the OECD calls “required schooling” in the same way. Pew illustrated this point using Texas, where the number of school hours per year (1,260) appears be the highest in America but where, unlike other states, that total includes lunch and recess.

And, of course, money might affect the syllabus, too. The 2007 schools and staffing survey by the National Center for Education Statistics found that in a typical week, third-graders in U.S. public schools spent 2.8 hours more on core subjects, but 30 minutes less on foreign languages and 30 minutes less at recess, than their counterparts in private schools.

I’m still none the wiser about hours spent studying food technology worldwide. But even if American students are spared the pain (literally) of attempting to chop potatoes, I won’t begrudge them given how many hours they’ll be required to spend in class this year.

CORRECTION (Sept. 4, 3:26 p.m.): An earlier of version of this story included several paragraphs and a chart discussing the time students spend studying math and science in different countries. The supporting data, taken from the Trends in International Mathematics and Science Study (TIMSS), was incorrect and represented scores on tests rather than hours of classroom instruction. Annual instruction data is not available in the TIMSS database, and we have removed the inaccurate chart and surrounding text.