People in North Carolina are pretty stingy compared to other Americans. That’s according to a Gallup poll showing that a little more than half — 55 percent — of North Carolinians said they had donated money in the past month, the lowest of any state.

I have mentioned how “social desirability bias” can push survey respondents to fib; some respondents in Gallup’s poll might not have given 100 percent squeaky-clean answers for fear of being judged uncharitable. So maybe people in Utah — where 71 percent of respondents said they had given money to charity, the highest share in the U.S. — aren’t necessarily the most generous; they could just be more ashamed to answer no.

I looked for another way to measure how generosity varies across the country and found a comprehensive study published in 2012 by the Chronicle of Philanthropy, using data from the Internal Revenue Service, the Census Bureau and the Bureau of Labor Statistics to examine donations.

Now we have two different measures of generosity for each state. The philanthropy study shows the total amount donated in each state in 2008 (which we can use to calculate per capita donations), while the Gallup poll shows the percentage of people who say they have given money. This comparison doesn’t show that those in certain states are lying — it merely highlights the difference between how many people say they have given to charity and a rough estimate of how much people are actually digging into their pockets. Do they correlate?

At the top of the most-charitable list, survey responses and giving match up. As a state, Utah gave $2.4 billion in 2012; that doesn’t seem like much compared with other places (Tennessee gave $2.7 billion), but Utah’s annual donations per capita ($827) were the highest in the country.

Why are Utahans giving so much? Members of the Church of Jesus Christ of Latter-day Saints make up almost 60 percent of the adult population (by far the highest of any state), and Mormons are asked to donate 10 percent of their income in tithes to the church.

Generosity in Utah is high whichever way you look at it, but responses elsewhere are less consistent. In New Hampshire, where 70 percent of people say they give, donations per capita were only $309. Similarly, in North Dakota, donations per capita ($226) seemed low compared with the fraction of people who said they were giving (67 percent).

Despite those outliers, there is some consistency between charitable donations and claims about generosity (a consistency with a coefficient of 0.384, if you want to get specific). 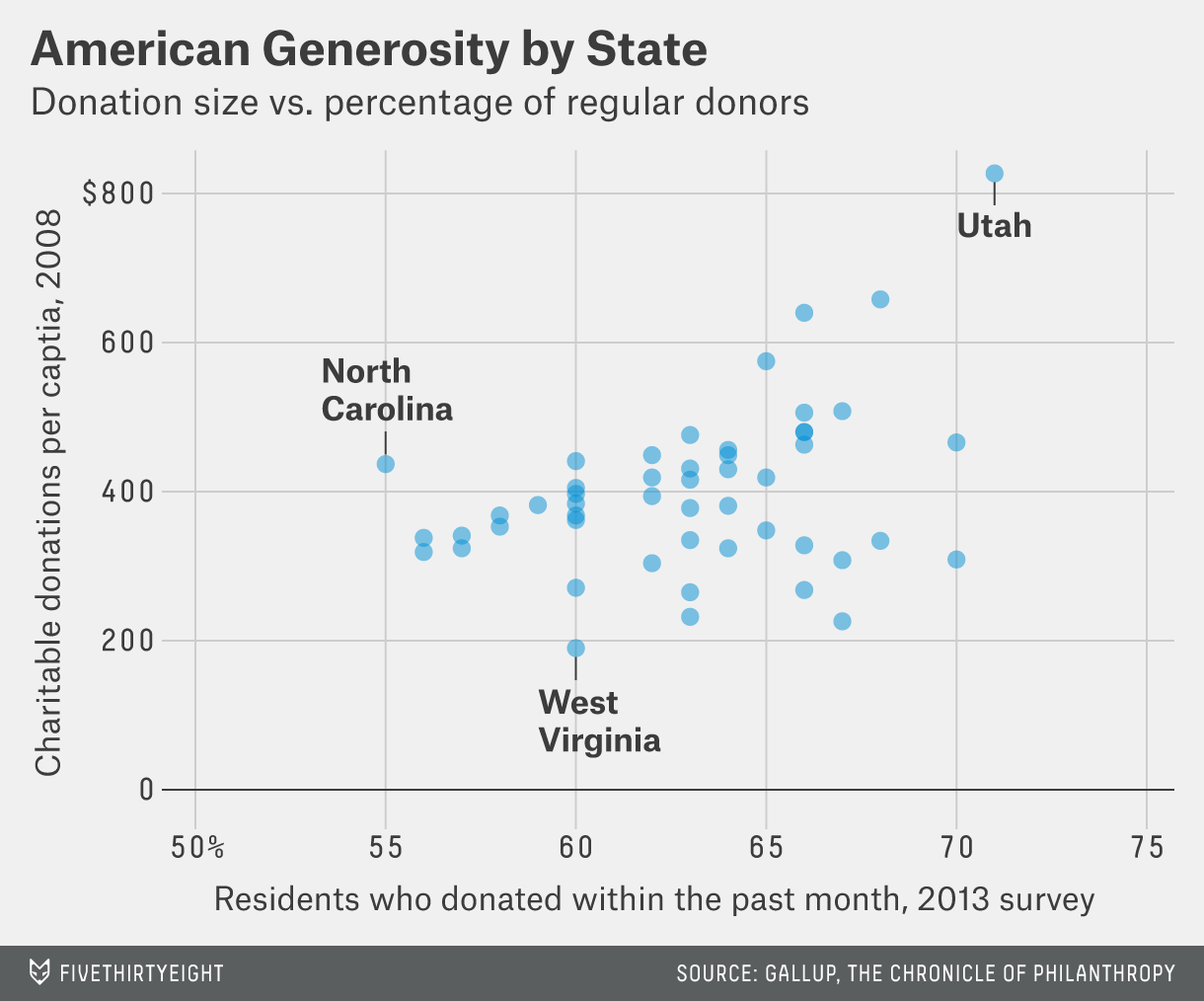