One of baseball’s most prestigious groups has a new member: Los Angeles Angels first baseman Albert Pujols joined the 3,000-hit club Friday with a single in the 5th inning of L.A.’s game against the Seattle Mariners. Pujols was a future Hall of Famer regardless of his club membership, of course, but the achievement helps bring into focus just how incredible a hitter he has been over his nearly two-decade-long career.

Including the brand-new entry, 32 batters have broken the 3,000-hit barrier, from Cap Anson in 1897 (maybe?) to Pujols 121 years later. Of those 32, only the scandal-ridden1 aren’t either honored in Cooperstown already or bound for the Hall when eligible. But even among that group of baseball’s best-ever hitters, Pujols stands out. While many members of the 3,000-hit club (such as the recently quasi-retired Ichiro Suzuki) secured their memberships by rapping out single after single, Pujols did it with power and patience. He’s tied with Willie Mays and Alex Rodriguez for the highest isolated slugging percentage (a stat that measures raw power) of any 3,000-hit-club member, and he has the club’s very best career ratio of extra-base hits plus walks to singles: 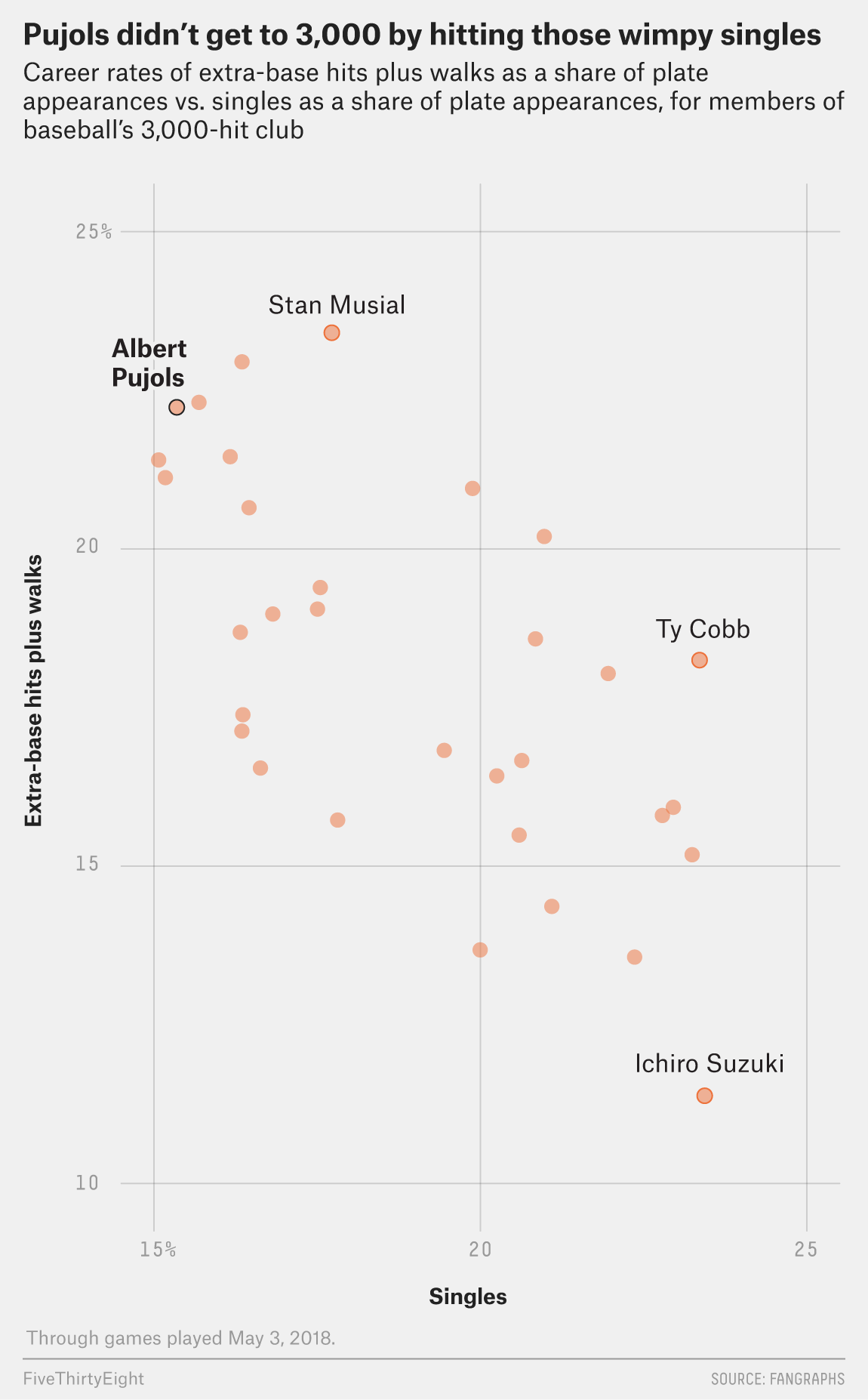 To be sure, others in this club mastered the art of waiting for the right pitch and crushing it. Willie Mays, for example, had almost as many extra-base hits plus walks per single (1.42) as Pujols does (1.45). But it’s still pretty uncommon, and Pujols is perhaps the greatest practitioner of the style among 3,000-hit-club members. It’s hard to get 3,000 hits against major-league pitching at all, much less to do it while also swinging for the fences.

Perhaps this partially explains why Pujols hasn’t aged as well as other hitters; heck, one outlet went so far as to call him the worst player in baseball last year. (Oh wait, that was us.) A base-hit maestro like Tony Gwynn or Craig Biggio might naturally fare better as the baseball odometer ticks up. But despite a steep slowdown in production, Pujols still made it into the 3,000-hit club — a milestone other hitters with power and patience never reached (think Barry Bonds, Ken Griffey Jr., Mike Schmidt or even Babe Ruth). It’s a testament to the 21st century’s most fearsome hitter.

Rachael Dottle is a former visual journalist for FiveThirtyEight. @rachaeldottle