One of the cool features at Memeorandum, my favorite aggregator of political content, is that you can warp back to any previous point in time to see which stories were dominating bandwidth on the World Wide Web. Here, for example, is what the world looked like on Election Night, or on the morning that Sarah Palin was selected to be John McCain’s running mate.

I thought it would be useful to examine how the current controversy surrounding AIG has spread throughout the Internet over the past several days. This story has been a little bit unusual in that it’s not all that newsworthy: AIG’s intention to pay its so-called retention bonuses has been public knowledge for some time. But the story has absolutely blown up within the past 72 hours.

The immediate trigger for the controversy appears to have come late Saturday evening, when the Washington Post posted the web version of a page A01 story from its Sunday edition: “AIG Paying Millions in Bonuses Despite Receiving Federal Bailout”. The Washington Post story contained two real pieces of reporting: firstly, that Tim Geithner had been talking to AIG CEO Edward Liddy about the retention bonuses and was extremely unhappy about them, and secondly, that Geithner had prevailed upon Liddy to make some revisions to other types of bonus provisions. The first blogger to pick up the story and show up on Memorandum’s radar screen was David Waldman at Congress Matters. By midnight, he’d been joined by only a couple others, although meanwhile, the New York Times published a story that largely replicated the Washington Post’s reporting.

On Sunday, the story gained significant steam throughout the liberal blogosphere. By 3 PM, according to Memeorandum, 20 independent (e.g. not related to a major media outlet) blogs had picked up some variant of the AIG story, of which 16 (by my count) have a definitive liberal orientation. There was then an additional round of attention later in the day, this time mostly coming from the mainstream media, after AIG’s counterparty list was released, and as the papers began to release content online from their Monday editions.

AIG-related affairs continued to dominate the discussion on Monday after Barack Obama said he wanted to block the bonuses and amidst speculation about the political fallout. Over the course of the day, the discussion tended to shift from liberal blogs to mainstream media channels.

Then yesterday (Tuesday), the story got bigger rather than smaller, becoming the subject of about twice as much discussion as it had been 24 hours earlier. Noteworthy about yesterday is that conservative blogs, which had been slow on the trigger initially, finally started to cover the story en masse, perhaps sensing the potential for embarrassment to the Administration.

Here is a graph of how this all looks at 3-hour intervals (skipping overnight periods): 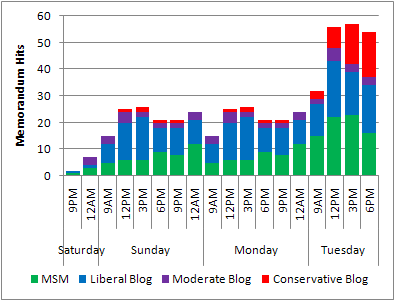 Here’s the unresolvable hypothetical: is there a universe in which this story wasn’t going to blow up huge? My general assumption, and I can’t really offer any proof of this, is that in the world of the highly-interconnected, 24/7 news-o-sphere, the propagation of particular news stories is in fact somewhat chaotic and unpredictable, subject to all sorts of network effects and power law distributions. I don’t know if that was the case for this particular story, but I’m pretty sure it can be true under certain circumstances: it’s harder than it used to be to predict what the headline will be on a given day.

What was definitely true in this instance (as is very often the case) is that the blogs (at least the liberal ones) were ahead of the mainstream media in getting after the story; AIG was dominating the blogosphere discussion by midday on Sunday, whereas mainstream media outlets, except for the Times and Post, didn’t really catch up until that evening. On the other hand, the conservative blogs were quite slow in gravitating toward the story, not really focusing upon it until late yesterday morning, in spite of the fact that it had all sorts of potential to be damaging to the Obama administration. Conservative bloggers should probably spend more time reading liberal blogs for story ideas (likewise, liberal bloggers should spend more time reading conservative ones).

The final lesson might be one for the Obama Administration: the possibility for tsunami-like waves of press coverage is probably far greater now than it used to be. This is not the first time that Obama’s press shop appears to have been taken by surprise by the ferocity with which a story spread, the Jeremiah Wright case providing the most obvious prior example. What’s interesting is that the Post‘s initial story appears to have been based largely on conversations with unnamed officials in the White House. I’d be curious to know whether someone in the White House spoke out of turn, or rather, whether the “leak” had the blessing of the Administration (the initial story, as compared to some of the subsequent coverage, was relatively sympathetic toward Geithner).

Complicating matters further for Obama was that the liberal blogosphere wasn’t covering for him; on the contrary, the blogosphere tended to be eager to perpetuate the story. I need to be careful about what I say here — although I’m apparently in the extreme minority in believing both that the particular bonuses at issue here are not an especially big deal and that the solutions to recoup them are undesirable, I fully understand the widespread outrage as to what has taken place and am empathetic to both implicit and explicit criticism of the Administration for it. Nevertheless, this story is noteworthy for being the first case in which prevailing opinion among liberal elites broke in such a way as to probably be unhelpful to the Administration’s near-term political objectives. Nobody — neither liberals nor conservatives — are buying much of what Summers and Geithner are trying to sell.