Around the middle of the 20th century, there was no more fearsome hitter in baseball than Ted Williams of the Boston Red Sox. Williams could do it all at the plate: hitting for contact — his .406 average in 1941 was the last time anybody hit .400 in season; smashing extra-base hits — he’s second only to Babe Ruth in career slugging percentage; and relentlessly working the count — his .482 lifetime on-base percentage still ranks No. 1 all time. Throughout his career, Williams was obsessed with being known as the “greatest hitter who ever lived.” And he may well have been just that.

Countless pitchers, fielders and managers tried to stop Williams; few ever succeeded. But one adversary did employ an effective strategy to rob Williams of his hits, a tactic that’s still influencing the game today — in fact, more so now than ever.

This is part of our new podcast series “Ahead Of Their Time,” profiling players and managers in various sports who were underappreciated in their era.

The opponent in question was Lou Boudreau, starting shortstop and manager — back when player-managers were a thing — of the Cleveland Indians. Boudreau was a brilliant player in his own right, and to a certain degree, his biographer says, he resented the fame and attention that constantly came Williams’s way. More importantly, as Cleveland’s manager he also had to find a way to keep Williams from beating his Indians. So in between games of a doubleheader on July 14, 1946, Boudreau gave his fielders a quick crash course in the strange defensive configuration they’d be using later that day, one only sparingly used before in baseball history.

“[Boudreau] said, this is what I want you to do: See the the stuff I put on the blackboard? When I yell ‘Yo!’, that’s when everybody takes the position that I put on the blackboard,” Russ Schneider, Boudreau’s biographer, told me. “And the players said, ‘What’re you, crazy?’ Even his coaches said the same thing. ‘You can’t do that! How can you do that?’ He said, ‘We’re gonna do it.’”

What Boudreau was diagramming would eventually go down in baseball lore as the “Ted Williams Shift.” It was a simple case of playing the percentages: Boudreau knew Williams was an extreme pull hitter, and therefore more likely to make an out if more defenders were shifted to the right side of the field. So he rolled out a crazy-looking alignment that packed all four infielders between first and second base: 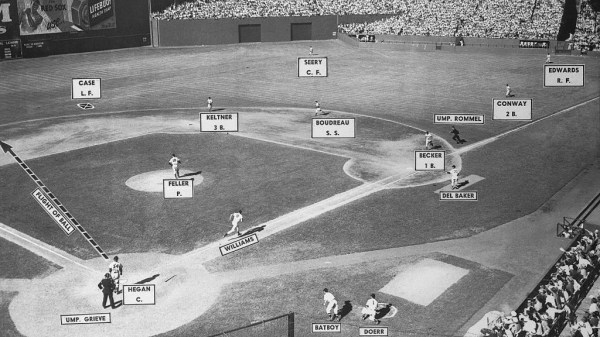 The first time Williams came up against his eponymous shift, he hit straight into it — in fact, he hit the ball right to Boudreau himself, standing directly between first and second base.

From that moment on, teams more or less shifted on Williams throughout the rest of his career. They did it so much that he once estimated it lopped about 15 points off of his lifetime batting average, and Williams’s intuition wasn’t far off: his career splits before and after that season showed a difference of 16 points. (Though other factors also surely contributed to that gap.) On paper, beating the shift sounded as easy as hitting the ball the opposite way, to left field, but Williams didn’t want to sacrifice his power stroke to right, nor did he want to alter the swing he’d honed since his youth. And he was reluctant to drop down a bunt. From 1946 onward, the shift was something Williams simply learned to live with, the price of his greatness.

As much as the shift annoyed Williams, though, managers didn’t use it very frequently over the next half-century. Fearsome, pull-happy sluggers in the Williams mold still saw shifts from time to time, but it wasn’t part of the big-league experience for the vast majority of hitters. That would change in a dramatic way at the beginning of the 21st century, however, as sabermetrics began to spread into the front offices of all 30 major league teams.

Baseball’s “Moneyball” revolution was rooted in both statistical analysis and the pursuit of cost-effective ways to win. At the intersection of both were data-inspired solutions that could be implemented quickly and on the cheap — solutions such as (you guessed it) the defensive shift. With significant strides being made in tracking both the batted-ball trajectories of different hitters and the effectiveness of various defensive alignments, analysts began to connect the dots. Given enough data on where each hitter tends to hit the ball, they realized that pretty much everybody can (and should) be shifted against to some degree or another.

That’s how we ended up in today’s shift-crazed game. According to shift data from FanGraphs (itself collected by Baseball Info Solutions), defenses put on some kind of shift for more than 28 percent of balls in play during the 2016 season, a new high for the seasons BIS has been tracking shifts.1 Under the influence of saber-savvy managers such as Joe Maddon, whose Tampa Bay Rays were at the forefront of shifting during the late 2000s and early 2010s, the use of novel defensive alignments has grown twelvefold across MLB since 2011:

Although Maddon now shifts his Cubs less often than the average team — does he know something everyone else doesn’t? — his shift-heavy philosophy from the Rays has permeated every team’s dugout. And hitters aren’t very happy about it.

“I absolutely hate the defensive shift,” retired slugger Carlos Pena told me. Pena would know: He was shifted against constantly during his playing days, particularly after he emerged as a star by hitting 46 home runs in the 2007 season. “The shift is absolutely a killer,” he said. “You’re doing exactly everything you set out to do. So you went up there to hit the ball hard, you hit it, crushed it — but you’re out.”

Pena fought back against the shift by bunting for base hits, but it still gave him fits over the back half of his career. He wasn’t alone. Player complaints over the shift have reached the highest office in baseball, with MLB commissioner Rob Manfred even contemplating a ban on them as a means of boosting offense.

All of this modern teeth-gnashing over the shift can be traced back to Lou Boudreau and Teddy Ballgame in 1946. Out of desperation, Boudreau drew up a special scheme to stop the greatest hitter who ever lived — and it worked. Sixty years later, we finally had the numbers to vindicate Boudreau’s vision, and major league teams took notice.

Now the only question left is whether the shift works too well for its own good.

For more on the shift, check out our podcast series “Ahead Of Their Time.” We’re publishing a new audio documentary each Thursday this month. Find it in the Hot Takedown feed in iTunes or your favorite podcast player.