So many polls, so little time! This is everything that’s been released today, including the results from our morning edition. 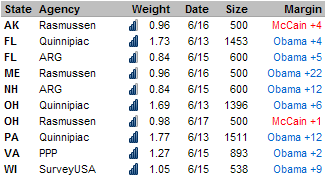 Let’s begin in Ohio, where Rasmussen‘s latest data contradicts the notion that Barack Obama is surging in the state. He still trails John McCain by one point in their polling; McCain had also led by one point in their May survey. There are several factors to consider here. Firstly, this poll postdates the Quinnipiac poll by a few days. I’m not yet convinced that Obama’s bounce is receding, in part because there haven’t really been any intervening news events to give some momentum back to John McCain, but that’s always something to keep in mind. Secondly, some of the pollsters (like SurveyUSA and PPP) that had shown Obama leading in Ohio by fairly large margins tend to have a more fluid/less grounded conception of party identification than does Rasmussen. In Ohio, they’re finding a huge shift in party identification, with as much as 50 percent of the state identifying as Democrat, and running with those numbers as is. Since SurveyUSA and PPP identify a lot more Democrats in their sample, and since much of Obama’s bounce appears to be in the form of bringing Democrats back home to their party, it is not surprising if they are showing more movement toward him.

Unfortunately, there are no definitive answers about how one should measure party idenitifaction, and we won’t really know who got it right until November. At a gut-feel level, it’s hard not to imagine Ohio being somewhat close. At the same time, Obama’s problems in the state had stemmed from his poor performance in Southern Ohio, which is part of Appalachia. And this is the region in which his bounce appears to be most profound: his polling has improved by 12 points in Kentucky and 15 in Arkansas, and he took some huge steps forward in Southern Ohio in Quinnipiac’s regional breakdown.

Other Rasmussen polling does show a bounce for Obama. In Maine, he’s ahead by 22 (up from 13 a month ago), and in Alaska, he trails McCain by just 4 points (down from 9 a month ago). There is certainly some novelty value in the notion of a Democrat competing in Alaska. But it’s a state that the Obama campaign ought to be taking reasonably seriously: Alaska is the the youngest state in the country in a year where we have the largest-ever age gap between the two nominees. Indeed, it’s probably time for Obama to visit Alaska. I don’t have any numbers on this, but I would guess that candidate visits make more difference in smaller states, and particularly those that are out of the way geographically. If Obama visits Alaska, it will create a ton of earned media, and McCain will probably have to follow him to defend the state.

The notorious A.R.G. (American Research Group) is out with their first general election polling of the year; they have Obama leading by 5 points in Florida, and 12 in New Hampshire. You probably know that I don’t have the highest opinion of ARG, but in their defense, their general election polling has tended to be pretty decent — it’s their primary polling that has been a mess. I do not, incidentally, find the New Hampshire result implausible, precisely because New Hampshire has some history of overreacting to current trends. With few New Hampshirites fitting into hard-and-fast demographic categories, and many of them identifying as independents, there is probably a higher fraction of swing voters there than any other state in the country. So as the country swings, New Hampshire swings twice over.

Finally, two results that tend to confirm our current impressions in a couple of states. In Virginia, Public Policy Polling has Obama ahead by 2 — this is their first poll of the Commonwealth — and in Wisconsin, SurveyUSA has Obama ahead by 9, up from 6 last month.