Last week BuzzFeed reported that backers of Rep. Steve Southerland had thrown the Florida Republican a men-only fundraiser earlier this year. The invitation came complete with instructions that attendees should “tell the missus not to wait up” because “the after dinner whiskey and cigars will be smooth and the issues to discuss are many.” Southerland, who is locked in a tight race against a female Democrat, is one of just a few endangered House Republicans in 2014 and has mostly himself to blame for his predicament.

In the short term, Republicans are a lock to keep the House. Yet the Southerland episode is emblematic of a very real long-term problem for the GOP: It’s a party that can’t seem to elect very many women or minorities to Congress.

On Election Night in 2012, when it was clear Republicans would comfortably hold onto the House despite winning 1.4 million fewer votes than Democrats in House races, Democrats took pride in a different statistic: For the first time ever, women and minorities would compose a majority — 53 percent — of their caucus. Meanwhile, the share of women and minorities in the GOP House conference went down, from 14 percent to 11 percent.

Soon after the election, Rep. Nancy Pelosi, the minority leader, noted the presence of 61 women, 43 African-Americans and six LGBT members among 201 Democrats in the House and hailed her caucus as a “picture of America.” Rep. Steve Israel, the chair of the Democratic Congressional Campaign Committee, piled on: “The Republican Caucus, if you look at it, looks like a re-run of the show ‘Mad Men.’ Our caucus looks like America.” (To his credit, Israel resisted the frequent likening of Speaker John Boehner to Don Draper.)

Political polarization in the House and Senate “is now at the highest level since the end of Reconstruction,” as the crack team of political scientists at VoteView has asserted, but so is demographic polarization. It’s a trend that shows no sign of abating after the upcoming midterm elections. 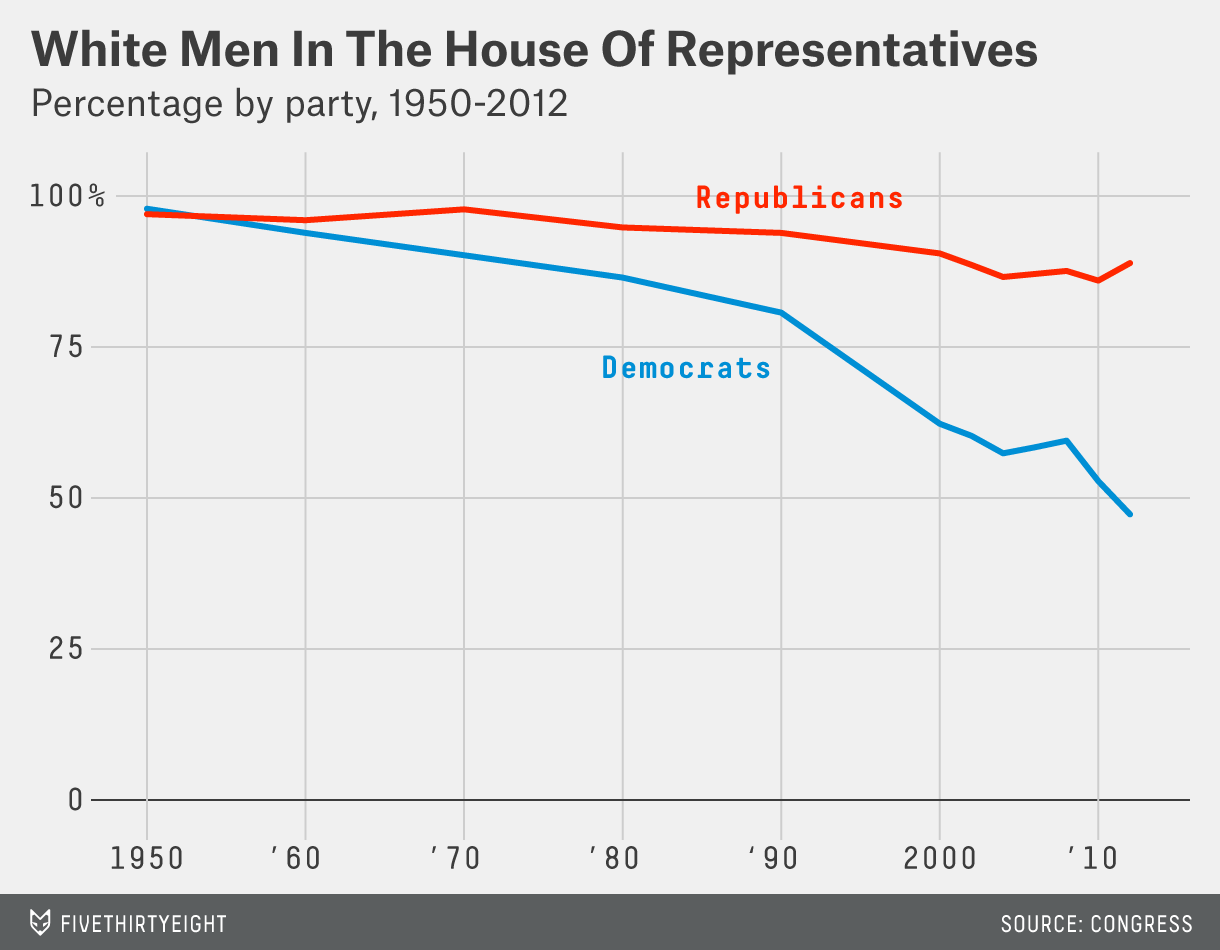 So why have Democratic representatives come to more closely resemble the population while Republicans have stagnated? Here are just a few reasons.

More Democratic voters than Republican voters value the idea that Congress should better reflect the country’s demographics. In July, Gallup asked voters, “Do you think this country would be governed better or governed worse if more women were in political office?” Among Democrats, 75 percent said better, and just 10 percent worse. But among Republicans, the idea was far less resonant: 46 percent said better, while 19 percent said worse.

It’s not that huge numbers of Republicans hold female candidates’ gender against them in congressional primaries (although 19 percent might). It’s that Democratic primary voters are more likely to see a female candidate’s gender as a bonus when given the choice between equally qualified candidates.

Redistricting — especially the increased packing of minorities into heavily Democratic districts — has transformed the House Democratic caucus. In 1998, my home district, suburban central New Jersey’s 12th, elected Princeton plasma physicist Rush Holt in a huge upset. Holt, a former five-time “Jeopardy!” winner, is far from a natural politician, a quality that endeared him to many voters.

In 2012, the heavily African-American cities of Plainfield and Trenton were added to the 12th District in redistricting, making a district that had been 84 percent white in 2000 a majority-minority seat. Holt is retiring this year, and in June Democrats selected state Assemblywoman Bonnie Watson Coleman as their nominee. If she wins, Watson Coleman will become the first African-American woman to represent New Jersey in Congress.

The biggest single drop in white men’s share of the Democratic caucus occurred in 1992, when a proliferation of majority-black districts in the South elected a number of African-American members and the so-called Year of the Woman ushered in 28 new congresswomen. But partisan redistricting by Republicans in 2012 only packed minorities more heavily into Democratic districts, increasing racial minority groups’ strength in Democratic primaries.

In 2012 redistricting, the white share of the average Democratic House district’s population declined slightly to 51 percent from 52 percent, while the white share of the average Republican House district’s population increased a touch to 75 percent from 73 percent. By purging heavily Democratic minority voters from their own districts, Republicans continue to reduce their own incentive to nominate candidates who reflect the increasing diversity of the country.

Democrats have built a much stronger network to recruit and fund female candidates for office, while Republicans are playing catch-up. Founded in 1985, EMILY’s List (which stands for “Early Money is Like Yeast”) has become a force to be reckoned with in elections, helping pro-choice Democratic women tap into an extensive national network of donors. And the Democratic women’s campaign training organization Emerge America claims to have 232 alumnae running for office across the country in 2014.

Republicans’ largest analogous endorsing groups, Maggie’s List and She-PAC, were created in 2010 and 2012, respectively. Last summer, the National Republican Congressional Committee launched “Project GROW” (Growing Republican Opportunities for Women). But according to the Center for American Women and Politics at Rutgers University, only 93 Republican women are running for House in 2014, compared to 108 in 2012. Only a fraction have a chance to win.

We can already project if the gender and racial gap between the parties will get even wider after the midterm elections in November. With less than two months to go before the election and fewer than 10 percent of 435 House seats considered competitive, the House’s future demographics are already somewhat clear.

Republicans are running several very strong women candidates in 2014, including Martha McSally (AZ-02), Mimi Walters (CA-45), Elise Stefanik (NY-21) and Mia Love (UT-04), as well as several viable gay candidates. But Democrats will be adding to their ranks of women and minorities as well, while white male Blue Dog Democrats such as Reps. Mike McIntyre (NC-07) and Jim Matheson (UT-04) are retiring.

Republicans may have a lock on control of the House, in part because they’ve succeeded in drawing themselves districts much whiter than the nation as a whole. But when a congressional party is 87 percent white and male versus 31 percent of the country’s population, it might have a brand image problem even Sterling Cooper Draper Pryce would be hard-pressed to solve.

In that sense, an unrepresentative House may be just one more obstacle in the Republican presidential nominee’s way come 2016.