After a huge night on Super Tuesday — and with all his major opponents1 except Sen. Bernie Sanders having dropped out — former Vice President Joe Biden is a strong favorite to win the Democratic nomination, according to the FiveThirtyEight forecast.

We’d encourage you to approach the forecast with a bit of caution for the next few days until we have new polling and a better sense of what the post-Super Tuesday landscape looks like. There are several uncertainties to keep in mind:

With that said, even if there’s some uncertainty here — perhaps a bit more of it than the model lets on — things don’t look good for Sanders. He has several compounding problems:

So basically, Sanders has to come back quickly when the momentum is currently against him in a bunch of states that are not very good for him — or it will be too late. It’s not impossible. But the chances are low. The model gives Biden an 88 percent chance of winning a majority of pledged delegates, with most of the remaining outcomes being “no majority” rather than a Sanders majority. It also gives Biden a 94 percent chance of winning a plurality of pledged delegates, and Sanders a 6 percent chance. 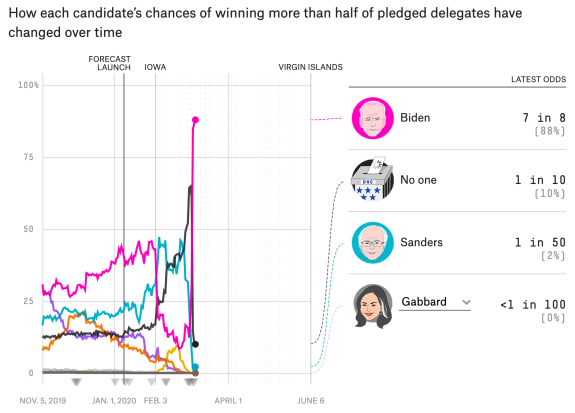 Again, that’s not impossible. Any chance that’s 5 percent or higher is within what you might think of as the model’s “margin of error.” The model does not account for other real-world contingencies such as Biden dropping out because of a health problem. (It assumes that the delegate leader never drops out of the race.) But the comeback path is not going to be easy for the senator from Vermont.

The one potential opening for Sanders is that the recent volatility in the polls could imply further volatility in the days and weeks ahead. This is one thing we looked at while the model was “off” over the past couple of days: Is recent polling volatility predictive of future volatility?

Note that the volatility could run in either direction, however. It could mean that Biden completely runs away with the race and wins Michigan by 25 points or something next week.

But since Sanders is a substantial underdog in the race, the more volatility the better for him. He’ll take his share of 25-point losses if he can get his share of upset wins. And the model does reflect the substantial uncertainty in Michigan, a state where polls have historically not been very good, giving Sanders a 21 percent chance of winning there. Even a win in Michigan would just be the first step in a long journey back to front-runner status for Sanders — but every comeback has to start somewhere.