House Majority Whip James Clyburn has boldly proclaimed that he felt “certain that the House Democrats will pass health care reform” if the Senate adopted certain changes to its bill as part of a reconciliation “sidecar”. It was one of the few optimistic statements that we’ve seen from Democrats since Scott Brown’s victory last week — but it’s contradicted by a raft of pessimistic sentiment coming from other parts of the caucus.

Here’s what I think we can say: there’s nothing to suggest that the math is impossible for the Democrats. But nor is it easy — and you aren’t liable to stumble into very many people on the Hill who would place a high probability on the Democrats succeeding. Let’s take a somewhat detailed look at the math they now have to contend with.

The House passed its own health care bill 220-215 on November 7th, giving Democrats just 2 more votes than the 218 minimum needed for passage. One of those spares is already gone: Congressman Robert Wexler, who has since retired to head a non-profit. In addition to Wexler’s defection, the Democrats face resistance from at least three other groups of people who initially voted for the bill:

1) Blue Dogs, freshmen and sophomores in tough districts. Although logic would dictate that it wouldn’t do these Congressmen much good to flip-flop on the bill — last I checked, “I voted for the bill before I voted against it” wasn’t a winning campaign slogan — people on the Hill are scared and the logic may not prevail in all cases. At least two Democrats, Zack Space of Ohio and Gerry Connolly of Virginia, have made statements critical of where the process now stands, although both left themselves some wiggle room.

2) The Stupak Block. These are people who ostensibly have moral objections to a bill which does not go far enough in cutting off federal funding for abortions — one of the few areas in which the House’s bill was more conservative than the Senate’s. The buzz on the Hill is that Stupak won’t be able to whip anything like his entire constituency, but could deprive the bill of 8-10 votes. One important caveat: as you’ll see in a moment, there is a strong degree of overlap between Group 1 and this one; a lot of people may use Stupak as an excuse to flip-flop on the bill when really they’re more concerned about their electoral status.

3) Progressives. If the Senate gets its act together and appears prepared to pass a reconciliation sidecar, odds are that there won’t be a substantial number of defections from this group since the result should look fairly close to what would have come out of the conference process anyway. If the Senate cannot credibly promise to pass a sidecar, however, the center may not hold, as this group has already lost a lot of face throughout the health care debate and feels looped out of the process.

I designed a simple logistic regression model based on the results of the House’s original vote; it predicted the likelihood of a yea vote based on two variables: the PVI of a district, and each Representative’s lifetime Progressive Punch score on health care votes. Other variables — such as the competitiveness of a district or the tenure of the Congressmen — turned out not to be statistically significant, although that doesn’t mean they won’t play into people’s thinking.

Here were the least likely yes votes based on that model, plus Steve Driehaus and Connolly, who have made skpetical statements about the bill. 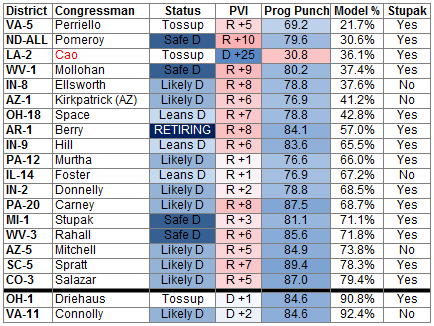 It’s not too hard to see where the “Stupak block” comes from. In addition to Stupak himself, there are five other Congressmen who appear on this list and who (i) voted for the Stupak amendment and (ii) are in a race that is characterized as ‘lean’ or ‘toss-up’ according to Cook Political. These are: Tom Perriello (VA-5), Joseph Cao (LA-2, the lone Republican vote for the bill), Zack Space (OH-18), Baron Hill (IN-9) and Steve Dreihaus (OH-1). In addition, there are five other Democrats who voted for Stupak and are in a district that rates as ‘likely’ Democrat: Jack Murtha (PA-12), Joe Donnelly (IN-2), Chris Carney (PA-20), John Spratt (SC-5) and John Salazar (CO-3). Although Murtha is unlikely to defect because of his leadership position, the other four easily could, which brings the potential size of the Stupak block up to 10.

The good news for Democrats is that once you account for the Stupak voters, there’s probably nobody else who is a slam-dunk to defect. Earl Pomeroy of ND-ALL and Alan Mollohan of WV-1 were rated as having under a 50 percent chance of voting for the bill by the model and each voted for Stupak, but both are popular incumbents in safe districts. For Democrats who didn’t vote for Stupak, it will be a little bit more of a stretch to rationalize the flip-flop; perhaps someone like Bill Foster (in the highly competitive IL-14) would be tempted to, but for most the consequences of switching their vote (angering leadership, possibly inviting a primary challenge, confusing their voters) would seem to outweigh the potential benefit. What they’re more likely to do is lobby against having to take another vote in the first place — but if the bill does come back before the floor, they’ll likely wind staying on the aye side.

On the other hand, there are a few potential sources of votes from people who didn’t vote for the bill initially.

1) Retiring Democrats. Three Democrats who voted against the bill originally — Brian Baird (WA-3), John Tanner (TN-8) and Bart Gordon (TN-6) — have since announced their retirement, and all are at least reasonably liberal when free of other constraints. Any path to 218 will probably require these votes. There might also be Democrats who have not yet announced their retirement but are planning to do so, or are at least indifferent enough to the prospect that they might vote to protect their legacy rather than their electoral interests; the 78-year-old Ike Skelton (MO-4) comes to mind.

2) Progressive No’s. Two Democrats, Dennis Kucinich (OH-10) and Eric Massa (NY-29), claimed to have opposed the original bill for being too conservative. While, on the one hand, it would seem unlikely that they’d vote for a more conservative bill if the original bill was already too conservative for them, on the other hand they both had the luxury to cast a protest vote before whereas now their votes might be needed. With that said, Kucinich is notoriously stubborn and perhaps unwhippable, and it’s not clear whether Massa’s opposition in fact comes from the left or whether he’s trying to duck a tough vote without killing his netroots street cred.

3. Blue Dogs. Some other legislators, on the other hand, may like that the Senate’s bill is more conservative, and one, Jason Altmire (PA-4) had come close to saying that he’d vote for it. Mike Ross (AR-4), who voted for a more conservative version of the bill in committee, is in an apparently safe district and is someone else who will be whipped heavily. Two other Democrats, Ben Chandler (KY-6) and Tim Holden (PA-17), also appear to be safe bets for re-election and are probably not too intractably conservative to consider changing their votes. (North Carolina’s Mike McIntyre, who would otherwise fall into this category, apparently has more philosophical objections.) Then there are perhaps a half-dozen others who will at least take the phone call, based on a sort of sliding scale of their district’s safety and their personal philosophy; John Barrow (GA-12), one of the few Democrats from a blue-leaning district to have opposed the original bill, is one who Nancy Pelosi will have on speed dial.

4. Artur Davis. Davis comes from the extremely Democratic (PVI D+18) Alabama 7th district, but has routinely voted against health care and most other Democratic initiatives because he thinks he can become Alabama’s next governor. With due respect to Davis, his chances of becoming Alabama’s governor are virtually nil in such a red-leaning cycle, and he may come under a lot of pressure to support the needs of his predominately poor constituents.

Here is how our model evaluated all 38 Democrats who voted against the bill originally, not counting Parker Griffith, who has since become a Republican. 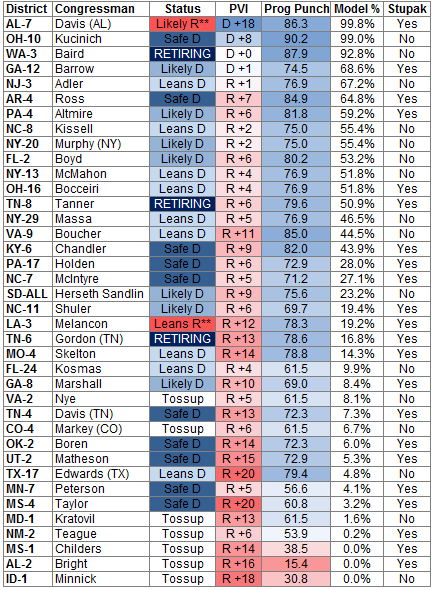 Overall, the playing field looks to be something like this:

If the Democrats still want to pass a real health care bill, their first step is to get everyone to focus and calm down, and their second step is to have the Senate prepare a reconciliation sidecar that will prevent progressives from defecting en masse. Although I don’t necessarily know that the progressives wouldn’t ultimately cave if they had to pass the Senate’s bill without the possibility of a sidecar, that’s certainly where the sentiment seems to be — and with other groups having their own objections to the bill, it’s going to be hard for a critical mass to form unless the progressives can save some face and begin to coalesce around the effort.

If each of those things is accomplished, the math is challenging, but not impossible. Although Democrats can expect at least 7 defections among people who voted for the bill originally and possibly as many as 15-20, there are at least a dozen and possibly as many as 15-18 Democrats who could at least potentially be whipped in favor of the bill, although only a handful of these will be easy acquisitions.

Intrade puts the odds of ‘Obamacare’ passing at about 2:1 against right now. I’d probably take the short side of those odds if forced to put money on it, as their are multiple stages at which the process could break down. Moreover, there is clearly very little margin for error, and Democrats will require both some focus and some luck. Nevertheless, the path to health care is probably still there, obscured as though it might be by the dramatics of the past eight days.

EDIT: What about passing a bill with a public option, as some progressive Congressmen are still trying to do? In that case, you’re probably limited to picking up Kucinich, Massa, the three retirees and Artur Davis, for six total. Losing Wexler plus the other six likely Stupak defectees would put the bill at 219-215 for passage, so it’s perhaps technically possible under the best of circumstances, but it makes the math more challenging in both the House and the Senate — keep in mind that there were 37 Democrats who voted against the original bill from the right but just two from the left. Unless … there’s been some sort of paradigm shift and Democrats feel like they can’t afford to sacrifice one of the more popular elements of the bill for the sake of fending off the “government takeover” meme, which sounds good on paper but is perhaps wishful thinking.