We continue our Presidential Geography series, a one-by-one examination of each state’s political landscape and how it’s changing. Here is Indiana, the Hoosier State. FiveThirtyEight spoke with Brian Howey, editor and publisher of Howey Politics Indiana; and Andrew Downs, director of the Mike Downs Center for Indiana Politics at Indiana University-Purdue University Fort Wayne.

Between the 2004 and 2008 presidential elections, Indiana swung 22 percentage points to the left, from favoring the Republican George W. Bush by 21 points in 2004 to President Obama by a single point in 2008. It was the largest swing — in either direction — by a nonhome state since the 1992 election. 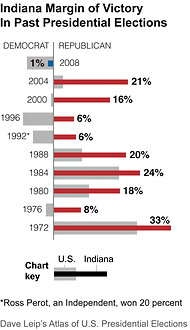 Indiana has not become a swing state.

The 2008 results — the first victory by a Democratic presidential candidate in Indiana since 1964 — were not caused by a shift in the state’s political fundamentals. Instead, 2008 was somewhat of an anomaly, caused by the intersection of mostly external factors and a favorable political environment for Democrats nationally.

First, the state’s Democratic primary in May, a hard-fought contest between Mr. Obama and Hillary Rodham Clinton, established a campaign infrastructure and raised enthusiasm among local Democrats, Mr. Downs said.

“The energy that was created in May was not that difficult to translate into November,” he said.

Geography also played a role. Indiana’s western neighbor is Mr. Obama’s home state, Illinois, and the Obama campaign was headquartered in Chicago. Volunteers from Illinois flooded across the border, while Indiana Democrats — who in past presidential contests had left Indiana to help campaign in neighboring battleground states — stayed to work in their home state.

At the same time, Senator John McCain’s campaign chose not to vigorously defend the state. “There was not a really good McCain structure,” Mr. Downs said.

The economy was a factor as well. About one in five Indiana jobs are based in manufacturing, one of the highest proportions in the country. As the economy fell apart before the election, manufacturing was one of the first sectors to be hit, and Indiana’s jobless rate climbed faster and higher than the nation’s. Hoosier voters were particularly keen on voting for change.

More generally, there was latent Democratic support in Indiana.

“Indiana is a red-leaning, ticket-splitting state,” Mr. Howey said, “and Hoosiers are not afraid to vote for the Democrat at the state level if they think that they’re the better candidate.”

Voters may have been accustomed to pulling the G.O.P. lever in presidential campaigns, but picking a Democrat wasn’t a completely alien concept. Indiana had Democratic governors from 1989 through 2004, and this year’s Senate race between Joe Donnelly, a Democrat, and Richard Mourdock, a Republican, is a tossup, according to the current FiveThirtyEight forecast.

In other words, Democratic presidential candidates had underachieved in Indiana until 2008, when Mr. Obama very much overachieved. The Obama campaign doesn’t have all those factors working in its favor this year, and the Hoosier state will most likely revert to its default partisan position: a reliably red state in presidential elections. 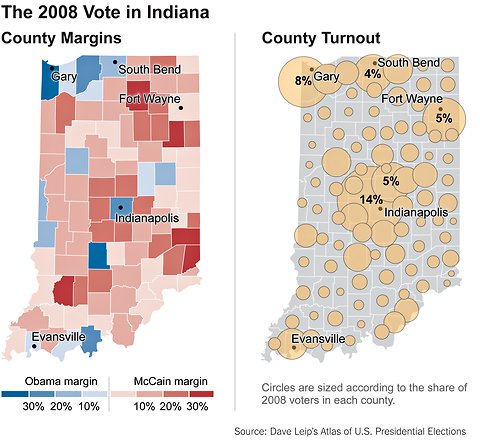 The Democrats have two main strongholds in Indiana. The first is Indianapolis, which has become much more Democratic-leaning over the last 10 to 15 years, Mr. Howey said, as more affluent, conservative-leaning voters moved to the suburbs.

The other Democratic-leaning area is Northwest Indiana, a region of working-class manufacturing towns that also had a sharp rise in the Democratic vote from 2004 to 2008. Gary’s Lake County is solidly blue, while the counties stretching from Gary east to St. Joseph County and the University of Notre Dame in South Bend are more marginally Democratic-leaning. Mr. Obama carried Northwest Indiana comfortably in 2008, but outside of Lake County the region is usually less left-leaning.

The rest of Indiana — outside of several counties dominated by university towns — is reliably Republican, particularly in presidential elections. The suburban communities in the “doughnut counties” that surround Indianapolis have become one of two bases of Republican power in the state. The doughnut counties are home to traditional suburban Republicans, fiscally conservative and family-oriented voters who tend to be more focused on issues like education than abortion and same-sex marriage, Mr. Howey said. 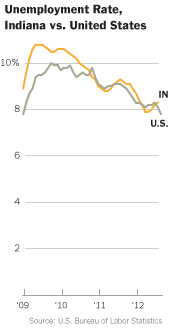 That contrasts with more socially conservative Northeast Indiana, the other base of G.O.P. support. The region around Fort Wayne, a mix of suburban, exurban and rural areas, is home to some of the most conservative voters the nation, Mr. Howey said.

Evansville’s Vanderburgh County, in southwest Indiana, has been a strong bellwether for the statewide vote in the last two presidential elections. It was one percentage point to the left of the state in 2008 and 2004, after being three percentage points more Democratic in 2000.

Southwest Indiana was historically dominated by “Butternut Democrats,” Indiana’s version of the socially conservative, working-class white voters in Southern states like Georgia and Alabama who were solid Democrats for generations but have been trending Republican. The realignment toward the G.O.P., just as in the South, happen
ed first at the presidential level and then in state and local races.

Mr. Romney is a 100 percent favorite to carry Indiana, according to the current FiveThirtyEight forecast, and Indiana’s brief flirtation with Mr. Obama appears to have ended. In fact, one dynamic that may have helped Mr. Obama in 2008 may be hurting him now: Indiana’s willingness to oust incumbents.

“Hoosier voters are willing to throw the bums out no matter who they are,” Mr. Howey said.

The Indiana House of Representatives has shifted hands several times over the past decades, Mr. Howey said. So have several Congressional seats, and the incumbent governor was defeated in 2004. Just this year, Indiana Republicans ousted Richard G. Lugar, one of the Senate’s longest-serving members, in a primary.

Indiana’s seeming unwillingness to give incumbents the benefit of the doubt is working against Mr. Obama this year, particularly as Indiana’s jobless rate, at 8.3 percent, recently swung above the national average.