In my previous post, I suggested the African-American proportion of the electorate in the Democratic primaries has been equal to about 175% of the percentage of African-Americans in that state. This off-the-cuff estimate was slightly too high; the actual ratio so far has been 153%. 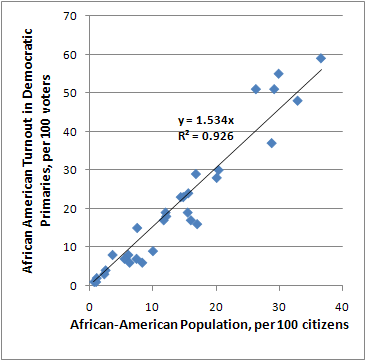 That’s a chart of all 31 Democratic primaries and caucuses so far in which exit polls have been taken. As you can see, African-American turnout is relatively easy to predict. On the other hand, it should be easy to predict, so I’m interested in whether there’s anything systematic about those states that tend to fall above or below the regression line.

Below are the turnout statistics for all states so far in which African-Americans make up at least 5 percent of the overall population. I’ve also included a couple of additional statistics: Bush’s share of the white vote in 2004 (per CNN exit polls), and the number of days that Obama spent campaigning in that state, out of the last 30 days before the election (per the Washington Post; I have excluded debates from the analysis but included all other types of events). 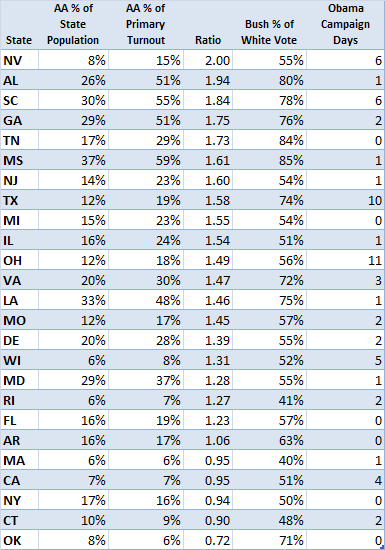 We see that the turnout ratio is generally highest in the South, where Bush won a larger share of the white vote (did you know that Bush won 85% of whites in Mississippi in 2004? Wow). This, also, is entirely predictable. If most whites in the state are Republican, that means a relatively greater share of the Democratic primary electorate will be black.

The interesting question is whether Obama can improve black turnout by campaigning actively in a state. There appears to be some evidence of this: black turnout was conspicuously low in some states like New York, Oklahoma, Arkansas and Florida, in which Obama mounted a limited or dispirited campaign. If we regress the turnout ratio on “whitebush” and “obamadays”, the Obama variable does show up as statistically significant at the 85% level (though, not at the 90% or 95% level). Specifically, the regression model specifies the following equation

If we like, we can try and use this equation to predict the African-American turnout in some of the upcoming primaries. Of course, we don’t know exactly how much time Obama is going to spend in each state, but let’s say that he winds up spending portions of 15 of the final 30 days before the election in Pennsylvania, 7 in North Carolina, and 5 in Indiana. We can then extrapolate African-American turnout in these states: