As I noted earlier, the Public Policy Polling blog reports that African-Americans represented 32 percent of North Carolina’s Democratic primary electorate in 2004. This figure undoubtedly plays a role in the fact that the vast majority of pollsters have settled on a number in the 32-33% range in forecasting black turnout time around. However, there are a couple of questions that we need to be asking about this approach. 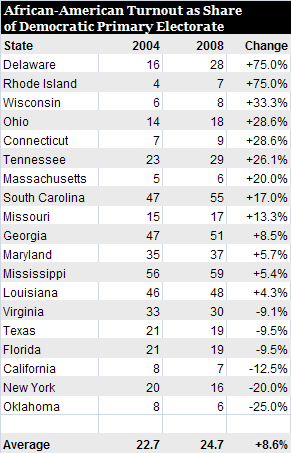 African-American turnout improved in 13 of these 19 contests. The average African-American turnout in these states has been 24.7% this year, as compared with 22.7% in 2004; that represents an increase of 8.6%. If you took North Carolina’s 2004 black turnout as a baseline and increased it by 8.6%, you would get to 35% — which as it happens is the number that PPP eventually settled on.

However, there is one other problem with this. North Carolina held a Democratic primary in 2004. But it did not hold a Democratic Presidential primary. (Instead, it held a Presidential caucus, which John Edwards won even though he had long since dropped from the race). The primary was for its governorship and one of its Senate seats.

Do African-Americans turn out more for Presidential primaries than they do in non-Presidential years? The truth is that we just don’t know because nobody bothers to do exit polling in primaries when there is no Presidential nomination to be had. However, we can perhaps draw an analogy by comparing African-American turnout in the 2004 general election with the 2006 midterms.

Below are all the states that held (i) a contested race for governor or Senate in 2006 and (ii) have an African-American population of at least five percent. 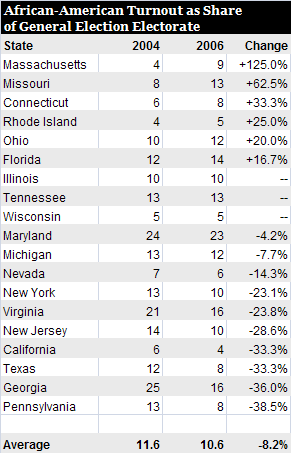 So, if we were trying to form a turnout estimate for North Carolina based on its 32% black turnout in its 2004 primary, we might approach the problem as follows. First, increase that figure by 8.2% to account for the fact that North Carolina’s 2004 primary was not for President, and African-American turnout appears to make up a a larger share of the electorate when there is a Presidential contest on the ballot. And second, increase that result by a further 8.6% to account for the fact that black turnout has increased this year as a share of the Presidential primary electorate. If you do those two things, you come up with an estimate in the range of 37-38%, which are the numbers I have been advocating for.