From day one, the relationships between the various elements of the international community in post-9/11 Afghanistan were quite challenging to negotiate. Led by the US/UK invasion in October 2001 and bolstered by the December 2001 UN Security Council resolution that established the International Security Assistance Force (ISAF), the international prescence has had many mandates, many strategies, some success and no shortage of controversy.

As discussed a couple weeks ago, internal and international political calculations have dominated the public discourse on Afghanistan for most of the 40 partner countries that make up the ISAF. At the same time, Afghanistan’s heavily contested election has brought to light major fractures in the United Nations mission in Afghanistan (UNAMA), further undermining the legitimacy of the government and efforts towards reform.

Most damaging in recent weeks has been the rather family crisis-esque saga that has played out between UN Special Representative of Secretary General in Afghanistan Kai Eide, and his former deputy Peter Galbraith. While Eide came out in support of the election results and the institutions that produced them, Galbraith heavily criticized the UN’s response to apparent fraud, implying, then accusing a bias towards Karzai. Galbraith was dismissed from his appointment by UN Secretary General Ban Ki-Moon as result of the dispute. He has alternatively been referred to as a principled “whisleblower” and as meddling in a sovereign state’s affairs while endagering the whole international mission in the country with his actions and subsequent media tour.

Since 9/11, Afghanistan has been a main location for the implementation of the industrial powers’ laundry list of best practices, though the effort has been explicitly focused on eliminating Al Qaeda. The last eight years have been, in a way, a referendum on the ideas that the West has been pushing for decades — democracy, personal freedom, interntional military forces (in many ways akin to peacekeepers) that have strong mandates and flexibility in their rules of engagement, lots of money at the table, full political and diplomatic resources, and the focus of the international media.

However, at the same time, Afghanistan has also emerged, more so than Iraq or elsewhere, as a location where grievances between western powers come to home to roost.

Whether battles between the US military and diplomatic forces and the UN, or the UN “slamming” donor nations for spending little of their aid budgets on the priority intiatives of the Afghan government, the situation sometime seems like a poorly coordinated extended-family reunion.

The US, UK and Canada have pushed other allies, particularly France, for being “not sufficiently committed,” while the US’s hard line policy on Iran has meant the the mission has great difficultly working with Afghanistan’s eastern neighbor (with whom most anti-Taliban forces share a language and some share the minority Shi’a Islam faith).

Though the United States spends tens of billions in Afghanistan each year, it represents a small proportion (around 4-7%) of the more than 620 billion of US military spending per year, and a small deployment of US troops. 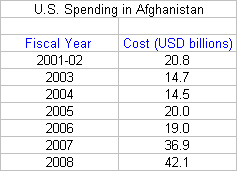 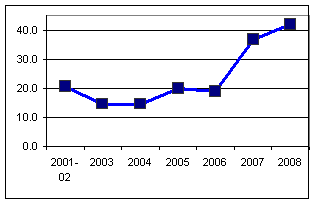 While the UK spending is far lower in aboslute terms, the Afghanistan excursion also represents a small proportion (about 4-5%) of the USD 65 billion (GBP 40 billion) defense budget of the nation. Much more spending has been done in Iraq.

For countries like Canada, Australia, the Netherlands and the UK, as well as many small contributors of troops, however, the Afghanistan situation represents a major portion (if not almost all) of the foreign engagements. 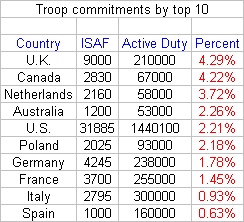 As a result, the stakes are very high for all players involved – the UN for credibility as as neutral arbitor and peacemaker, and for the western powers as state-builders and security forces. With the national moods for continued efforts in Afghanistan souring around the world, and big money going out the door to financenthe activities, many question how sustainable it is.

On the other hand, major military players in Afghanistan are seriously consider major new influxes of spending and troops, particularly in the US and UK. At the same time, political stabilization has been halted, if not turned back, by the ongoing electoral saga. It seems likely that the turning point has been reached — either the goals of the major internationals will have to be met (or have signficant milestones to point at) in the next 2-3 years, or a major pull-out is likely.

In Obamaland, this means less public focus on the war, fewer leaks, and more time to deliver meaningful results before 2012 comes knocking.