Back in August, I suggested that the Obama administration might be best served by getting Afghanistan off the front page as soon as they can, while at the same time working to implement the promised strategy change that was committed during the campaign and first elaborated on in March. By the end of 2009, the policy review was completed and a new strategy in place, including an increase in troop levels, broader regional focus and the basics of a U.S. exit strategy. 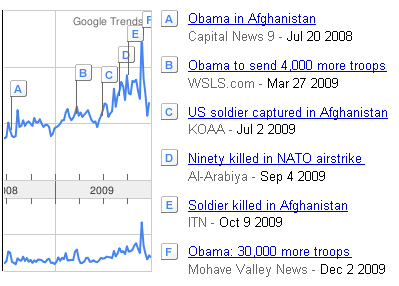 Almost immediately after the initial reactions to the announced strategy — and in part because it was done in the last month of the year — Afghanistan took a back seat to other issues on the table in the American political dialogue. On the foreign policy front, the Copenhagen climate conference and the attempted Christmas Day plane bombing sent Afghanistan significantly down in the public eye, at least as measured by (a cropped snapshop of) a Google Trends search on the term “Afghanistan.”

For the U.S. public, Afghanistan, perhaps more quickly than other issues he “inherited” from the Bush administration, is likely to become a major part of President Obama’s legacy. As such, the adminstration’s preference would probably be for Afghanistan to stay on the back burner until such time as there is good news to report, perhaps something like “the strategy is working and a 2011 start to drawdown is still feasible.”

But what about the congressional elections of 2010? And what incentives do the Republican opposition in Washington have to play along with Obama’s preferred storyline? As well, how does the anti-war left feel about Obama’s quite centrist (stronger military presence plus increased focus on regional and internationl cooperation) route in the region?

1. Congress and the 2010 mid-term election: As we examined last year, while having several powers over foreign policy of the U.S., the Congress blows hot and cold regarding it’s engagement and concern on foreign affairs. On the one hand, incumbents from an unpopular Congress are not likely to campaign on the platform of an unpopular war. At the same time, there are basically no votes that challengers can stick to incumbents regarding Afghanistan (though some members wanted one for the recent troop increase), making it slightly more difficult to politicize.

On the other hand, the Afghanistan war represents several of the major concerns that anti-incumbents, including those from the far-ish left and far-ish right, are concerned about and must emphasize in their opposition campaigns. Those who want to slash government spending, end or reduce U.S. military interventions abroad, or just generally punish either the Bush legacy or the Obama adminstration can all find something to criticize.

In conclusion, incumbents, except those who come from very safe districts, are likely to stay away from the issues as much as possible . Challengers should jump on it in a big way.

2. Republicans (and Conservatives) more generally: Using month’s breakdown of the factions of the U.S. right (graphic here), it is likely that there will be a plurality of strategies taken by the party out of power.

A. Pro-business community: At the end of the day, high military spending is good for business for many influential players in the United States. Many big companies or their subsidiaries have contracts with Defense Department or others, while few American companies have lost business as a result of the war. As a political player, however, other issues are more important to the community as a whole.

C. Populist Libertarians, Tea-partiers: Fairly strongly against troop escalation among the isolationists and anti-spending people. Someare in favor, however, causing a bit of a rift here. Strategy will depend on the candidate — Bill Owens in NY-23 ran on a “support for the war on terrorism” platform, without explaining specifics regarding Afghanistan.

3. Liberals and the Center-left (many but not all Democrats): Much like on healthcare, American liberals split on how to respond to the Obama Afghanistan strategy. Many are opposed to the escalation, while still others are willing give the Obama adminstration the “benefit of the doubt.” Among mainline center-left and centrist Democrats, however, the war effort is more popular. Conservative Democrats (many of whom fall into the social conservative category) are more in favor.

Again, the spectrum is mixed on the left as well as the right, with competing interests and ideologies conflicting among the left side. Don’t look for a coherant message on Afghanistan from Democrats outside of the White House until the adminstration signals that it wants to bring the issue up. While there may more more threats of liberal revolt, it is unlikely that many on the left will vote against Democratic congress(wo)men this fall as a result of the Afghanistan conflict.