Well, the results are in (again). The Electoral Complaints Commission has published three important decisions, which confirm that major fraud occurred during Afghanistan’s August Presidential election. At least a million votes will be thrown out — and likely more.

There are three main areas where votes have been disqualified from the total.

1. Electoral Audit: On 8 September, after a two week investigation, the Electoral Complaints Commission (ECC) ordered that the ballots from a number of polling stations be audited for fraud. They were categorized into six categories (originally three, but an error in logic accidently left a number of ballots out, so three more were added)

The polling stations that fell under these categories numbered 3377 out of a total of more than 26000 polling stations that were open on election day, about 13 percent. However, these stations, which largely had more (often many more) than 600 votes — almost three times the average — represents a significant chunk of the vote.

The process of auditing the 3377 suspected stations was done by “representative sample,” with 10 percent of each of the six categories of fraud chosen (random selection of polling station number), and the proportions of fraud found there applied to the whole selection of stations. 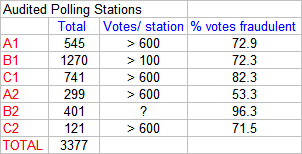 Not surprisingly, most ballot boxes in the sampled polling stations had significant and obvious fraud, with all but one category (the widest net) breaking 70 percent of votes being identified as bogus.

Bottom Line: The 3400 polling stations that were captured in the audit were the most blatant offenders. So it is possible that many more than 600 votes from many of them will be removed by the IEC from the total (see section three about 1000 vote stations). We do not yet know how many votes will be subtracted from each candidates total, but much of the disqualified vote is going to be coming out of Karzai’s column here.

2. Electoral Complaints: More than 2500 specific fraud complaints, with more than 3000 allegations of fraudulent activity (7 types) were fielded by the ECC, with a wide geographic distribution. Only Priority A claims have been pursued so far. 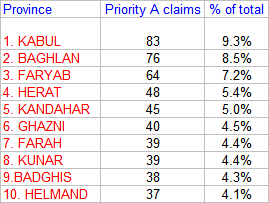 While focused in the volatile capital region and Baghlan, where heavy electoral violence was noted, electoral complaints of top concern were reported in all 34 provinces. The ECC’s investigation resulted in a total of 359 invalidated polling station, however, 138 of them were covered in the above audit.

Using the above average of 215 votes per polling station, another 50,000 votes have disqualified because of specific electoral complaints. This, of course, is a conservative estimate, given that many of the stations were accused of ballot stuffing or number tampering, which would inflate totals farther. In addition, stations that were counted in the audit and only partially disqualified could be indeed further reduced by being caught in this category as well. Finally, this tally does not include priority B and C complaints, which add up to another 1500 challenged polling stations.

Bottom Line: Another at least 50,000 votes (likely 2 or 3 times that number in reality) are gone from the total. Based on the geography, Karzai likely suffers more, with perhaps 65-70 pecent of the lost votes coming from his column.

3. Other Fraud (IEC): The Independent Electoral Commission, which has widely been reported as being “pro-Karzai” also quarantined a number of polling stations that it deemed to have fraudulent characteristics. Some of these overlap with the ECC’s list, others do not.

In the first type, we will include just 400 votes in the estimate, since we can assume that these stations were caught in the audit in section one, capturing at least the first 600 votes. For the other three categories, we can use the average of 215 again. Again, at least 83,000 votes are disqualified here, likely more.

Bottom Line: Nearly every 1000 vote station publicly identified came from Karzai strongholds, as well as almost all the polling stations that did not open but still sent in results. The too many ballot syndrone (those not captured by the audit), could affect either candidate, but still impacts Karzai more given the run-off situation. 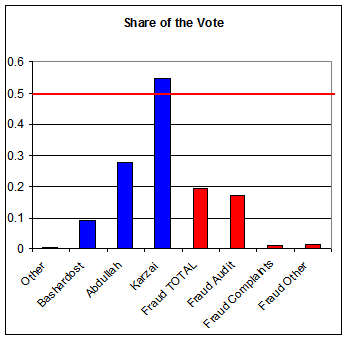 Using our conservative affected-vote estimates, the situation remains fairly damning for Hamid Karzai. Assuming that the results are equal to or less favorable than our estimates, it seems likely that a runoff will ensue. With just four percent of cushion, it would take a miracle for him to walk away with a majority after this, where 20 percent of the vote is fraudulent, much from his tally. Dr. Abdullah Abdullah is in the strongest position he has been in thus far, and could conceivably win a run-off held in strict conditions.

Of course, strict conditions we do not have in Afghanistan, where winter is rapidly approaching. If another round of voting is ordered, it could be difficult or impossible to complete before the freeze brings movement around the country, outside of major cities, to a halt. Perhaps a coalition government or tribally negotiated solution is in store?

Nonetheless, the Afghan government and all internationals remain in a pretty tight spot.

Update: Democracy International (an experienced election observer) has done its own projections, which were able to take into account the split of disqualifications more effectively than I could. They suggest that about a million Karzai votes, 200,000 Abdullah votes and 120,000 other candidate votes were disqualified, putting the final split at Karzai 48.3% and Abdullah 31.5%.
—
Renard Sexton is FiveThirtyEight’s international columnist and is based in Geneva, Switzerland. He can be contacted at sexton538@gmail.com