August 20th, 2009: save the date. The second round of post-Taliban elections in Afghanistan is slated to take place on this day — next Thursday — and expectations are mounting. Though the war in Afghanistan (as well as combat in Iraq), has largely taken a backseat to domestic issues in the Obama Adminstration’s rhetoric and the views of the public about threats to national security, key observers have identified this round of polling as an important benchmark for overall state-building progress in the country. 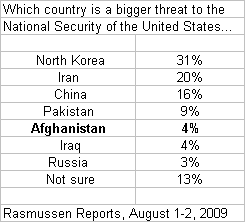 The International Crisis Group, a respected Brussels-based advisory organization on conflict and instability, put what is well understood in this way:
“The weakness of state institutions, the deteriorating security situation and the fractured political scene are all highlighted by – and will likely have a dramatic effect on – the electoral process…Rather than once again running the polls merely as distinct events, the enormous resources and attention focused on the elections should be channelled into strengthening political and electoral institutions, as a key part of the state-building efforts required to produce a stable country.”

Indeed, though Hamid Karzai appears posed to again emerge victorious, his position domestically is significantly weakened as compared to years past — a situation that has required significant concessions to political opponents. This arrangement, often in the form of political posts, influence and so forth, while maintaining apparent unity of the government, also entrenches a level of fragmentation into the government from day one. How serious these divides are will dictate the efficacy of the reform, capacity-building and security improvement that has been promised throughout the political leadership of all alliances, including the US and NATO.

Afghanistan sits in a unique position ethnically, geographically, politically, and economically. Devestated by thirty yers of conflict that began with the Soviet invasion in 1979, and still leading the world in opium production, Afghanistan remains a country split by ethnic groups, language and livelihoods. However, though many elements pull the country apart, a distinctive identity as a “Afghan” is still strong. 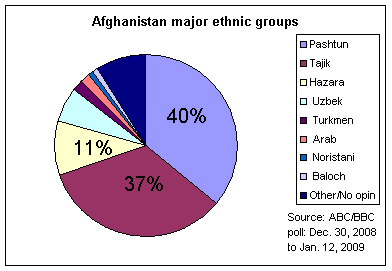 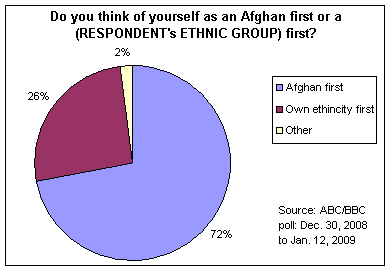 In addition to the strong national identification, there is a growing dissaproval of the conduct of the international community in Afghanistan, particularly the US, and a similar drop in confidence in the country’s direction. 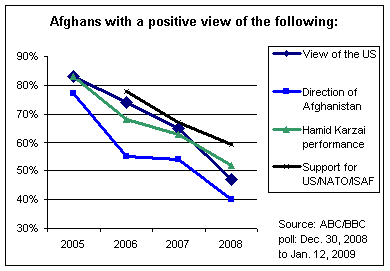 Taken at the final twilight of the Bush Presidency, the ABC/BCC polling indicates a remarkably dubious Aghan population, something that the Obama administration clearly understood coming into office. Anchored in his March address, the explicit US approach has undergone some significant changes. Five elements are key:

1. More troops: Supported by most military and civilian advisors and buoyed byUS public opinion, 21 thousand have been committed, and the door is open for more
2. Focus on fewer civilian casualties: As part of the shift to less military solution, the US hopes to reverse some of the rapidly eroding public support.
3. Change in cooperation strategy with Pakistan: Though not clear in detail, there has been a committment to stabilization and capacity building in Pakistan as well.
4. Narrowed set of operational goals: Dispensing with the lofty (and by many measures quite naive) ideals that previously marked the US approach, the Obama team has opted for a smaller, but more clearly defined set of objectives, namely security and state capacity.
5. Additional “Hearts and Minds” activities: While again difficult to assess in detail, the Obama administration has pushed the revision various policies of engagement, namely detention policy, USAID activities, and new directions to the military regarding how to engage at the causes rather than symptoms of instability and violence.

With violence rising and intimidation rife, you can never be certain the outcome of such an election. Both internationals and nationals have been targeted in the widely expected rise in attacks. Violent, state-skeptical elements, led by Taliban, have promised to disrupt the elections as much as possible. However, unless something radically changes, we can expect a relatively narrow Karzai bloc victory, as compared to his past resounding success. With the arrival of additional US forces, and a new Afghan government, we will see over the next five years if either change is afoot or stagnation is setting in.

A key part of this challenge will be, as it is in other regions of the world, whether the Obama administration’s rhetoric for strategy adjustment can actually be implemented in practical terms, and similarly if the impacts are as profound as suggested. While the President has done a remarkable job of managing expectations of the US public regarding foreign policy, in part by focusing strongly on his promises of domestic reform, the political impact of non-delivering policies could be seen by 2012. Tangible benefits for both the Afghans, in terms of security and stability, and for the Americans, in terms of clear benchmarks towards exit, will therefore be key to the Obama communications plan of 2011 and 2012. It is not yet clear what profile Afghanistan will have in the 2010 elections either, something that we will see first by the US political reaction to the elections next Thursday.

Note: Thanks to commenter who noted an important typo in the previous ethnicity chart.