Arkansas Senator Blanche Lincoln, who is up for a tough re-election fight next year, really doesn’t have any good choices when it comes to the Democrats’ health care reform bill. On the one hand, the measure has become unpopular in her state, and Arkansas — which was not so long ago considered a swing state, has since become deeply red: one of just a handful of states where Republicans actually gained ground between 2004 and 2008. On the other hand, opposing the measure would depress her base, virtually ensure a primary challenge, perhaps cost her plum committee assignments in the Democratic caucus, and create a toxic environment for the Democrats nationally. It really is a no-win situation.

And yet, by inserting herself at the center of the health care debate, Lincoln may be making matters even worse for himself.

Take a look, for instance, at some evidence from Montana, where we have a bit of a controlled experiment. In Montana, a purplish-red state, there are two Democratic senators — Max Baucus and Jon Tester — each of whom have ultimately decided to support the Democrats’ health care reform plans. But whereas Tester has staked out his position very quietly, Baucus seemed to relish the attention he received as the head of the Senate Finance Committee, virtually taking it upon himself to strike a deal with the Senate’s centrists, and frequently appearing in television and print media.

And what’s happened? According to the Montana State University – Billings poll, Tester’s approval ratings are virtually unchanged from two years earlier (although his disapproval rating has increased slightly). But Baucus has seen his fall precipitously, from 64 percent to 44 percent. 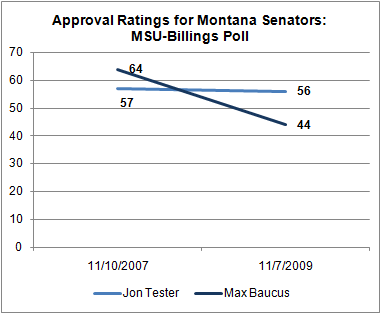 To repeat: Same state, same party, same position — more or less — on health care reform. But vastly different approaches: one senator seeking the spotlight, and the other shunning it. And vastly different trajectories of public opinion.

Baucus, indeed, is not alone in this department: virtually everyone who has tried to play a dealmaker role in health care has seen their approval ratings decline, from Chuck Grassley to Olympia Snowe to Harry Reid to President Obama.

If I were Blanche’s Lincoln’s Chief of Staff, my advice to her would be as follows:

1. Vote for cloture.
2. Vote against the bill itself.
3. Articulate this position clearly.
4. And then Shut The Hell Up.

Of course, it’s probably not possible for Lincoln to avoid the spotlight entirely: she occupies a somewhat unique position as the only Democratic Senator under serious re-election threat in a McCain state. I’m sure that Lincoln would rather that this whole health care thing had never come up for vote in the first place. But given that it has, and that it is much too late for the Democrats to adopt any sort of exit strategy, I would tend to want to minimize my role in the process. Part of that means staking out a clear position, because an undecided vote attracts unwanted attention. And the path of least resistance would seem to be committing to voting for cloture, so that the Democratic base, your colleagues in the Senate, and the national media don’t go nuclear on you — but against the underlying bill, which is unpopular in your state. Dithering, on the other hand, gives pretty much everyone the opportunity to be unhappy with you. And the polling evidence shows that if you give your voters an opportunity to be unhappy with you on health care reform, they probably will be.