The hiring of Jenna Bush Hager by NBC’s “Today” show to be an education correspondent smacks of non-meritocratic promotion, and has Salon’s Glenn Greenwald suitably fired up. Tongue planted firmly in cheek, Greenwald imagines this scenario:

They should convene a panel for the next Meet the Press with Jenna Bush Hager, Luke Russert, Liz Cheney, Megan McCain and Jonah Goldberg, and they should have Chris Wallace moderate it. They can all bash affirmative action and talk about how vitally important it is that the U.S. remain a Great Meritocracy because it’s really unfair for anything other than merit to determine position and employment. They can interview Lisa Murkowski, Evan Bayh, Jeb Bush, Bob Casey, Mark Pryor, Jay Rockefeller, Dan Lipinksi, and Harold Ford, Jr. about personal responsibility and the virtues of self-sufficiency. Bill Kristol, Tucker Carlson and John Podhoretz can provide moving commentary on how America is so special because all that matters is merit, not who you know or where you come from. There’s a virtually endless list of politically well-placed guests equally qualified to talk on such matters. 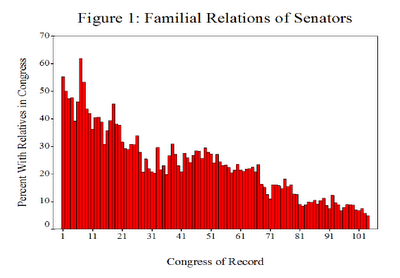 I can’t speak to the state of nepotism in the media; so far as I know, beyond anecdotal evidence, no statistics have ever been compiled to track this phenomenon. But when Greenwald cites U.S. senators–and as he wrote in a related, earlier post that, “Family succession is hardly unheard of in U.S. political history, but what was once quite rare has now become pervasive”–he’s simply not right, or at least as concerns the U.S. Senate. The fact is that nepotism in the Senate is today at historical lows in American history.

The figure printed above was part of an unpublished paper fellow political scientist Geoffrey Vaughan and I wrote earlier this decade about whether a “natural aristocracy” has emerged in the Senate along the lines envisioned by Thomas Jefferson or John Adams. Vaughan is a political theorist, and carried that part of the argument, so please don’t ask me to explain colonial-era American political thought. My contribution to the paper was to analyze the biographies of senators, using this IPSCR dataset to determine how much lower-office experience senators brought with them to the Senate.

One of the preliminary analyses we decided to conduct for the paper was to simply compute the share of U.S. senators in each Congress (through the 104th) with a relative who had served in Congress (House or Senate). As the figure above shows, the share of Senators with relatives who were serving or had served in Congress has been steadily shrinking. The passage of the 17th Amendment certainly accelerated this trend, but the downward trend predates even that significant event. As a point of reference when looking at the figure, the 64th Congress was the first in which senators–or at least the third from seats elected that year–were elected rather than appointed; by the 66th, the entire Senate had thus stood for election. (Our paper was about the Senate; we didn’t conduct a similar analysis for the House and so I can’t speak to that.)

Personally, and despite if not because of nepotism-beneficiary Adam Bellow’s justifications, I find nepotism for the most part galling. The insult added to the injury is provided by those people, many but not all of whom are white, who oppose affirmative action yet are themselves beneficiaries of a family- and/or legacy-style affirmative action that at some or several points along their career path helped them gain admissions to college, internships, jobs and promotions. Most annoying, in my experience, is how so many people associate the term “affirmative action” solely and exclusively with race-based preferences when, to take just one prominent example, college admission practices typically involve preferences granted not only to racial minorities but people of special talent (be they oboists or cornerbacks); the sons & daughters of alumni; and even to people based on region. (On this last, one can easily and rightly understand why state legislators would hesitate to approve funding for state universities if their constituents’ children could not gain a reasonable number of admissions; but, given the disparities in SAT by region or county within states, this reality implies and in practice compels regional quotas, a form of affirmative action that often admits rural whites with otherwise non-competitive SAT scores into college. One can only hope that such whites arrive on campus as strong advocates of affirmative action.)

Of course, family names are still powerful, as the recent passing of Ted Kennedy testifies. Greenwald is certainly right to sniff familial advantage in the election of, say, Mark Pryor or Lisa Murkowski. But the fact is that familial hookups in the Senate just ain’t what they used to be.