MSNBC’s First Read reports that the moderators for the three Presidential Debates have been chosen. They are Jim Lehrer of PBS, Tom Brokaw of NBC, and Bob Schieffer of CBS. Gwen Ifill of PBS will moderate the Vice Presidential debate.

This lineup is nearly identical to 2004, except that Brokaw is replacing Charlie Gibson in the second debate. Whether this is a direct response to ABC’s much-criticized Philadelphia debate during the Democratic primaries, I don’t know — I’m frankly not sure about how these things are negotiated — but it’s probably a slight break for Obama. It’s also a bit of a break in tradition for ABC, which has moderated far more debates than the other major networks (see table below).

One break for McCain? The first and third debates will feature both candidates seated, rather than standing at their podiums (the second is a town-hall format), depriving Obama of the opportunity to fully leverage the aesthetics of his height advantage. 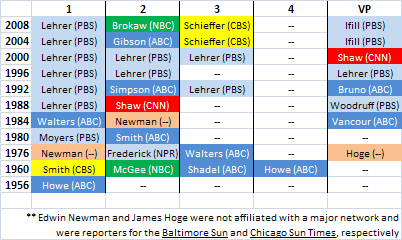