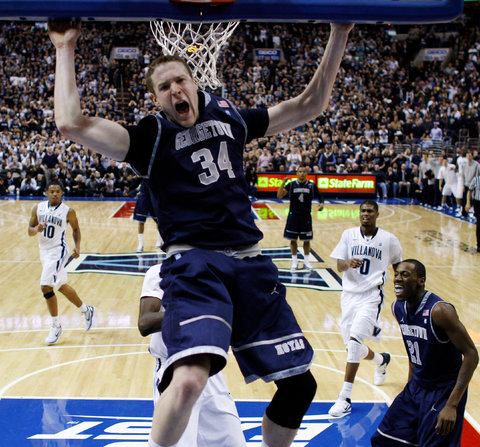 Matt Slocum/Associated Press Georgetown is among the Big East’s seven nonfootball members that could thrive in a new conference.

A variety of reports suggest that the seven Big East schools that do not compete in high-level football may split off to form their own basketball-centric athletic conference.

Georgetown, Villanova, St. John’s, Marquette, Providence, Seton Hall and DePaul share a history of relatively successful men’s basketball programs, along with a heritage as Roman Catholic colleges. They have more in common with one another than they do with the other members of the Big East, which has diluted its basketball brand in its effort to remain intact as an elite football conference.

A conference composed of these seven teams, along with select others that do not sponsor Division I football programs, could offer a men’s basketball league that was roughly as competitive as that of major conferences like the Pacific-12 and the Southeastern Conference. The alternative, to remain attached to the other members of the Big East, would put these schools at risk of being associated with a conference that would come to be regarded as second-tier.

In the table below, I’ve listed the average power rating for the 16 schools that were to have been Big East basketball members as of the 2014-15 season, based on the formula designed by Jeff Sagarin of USA Today. The power ratings are long-term averages and reflect each team’s performance over the past 10 full college basketball seasons, plus the portion of the 2012-13 season that has been completed so far. (The schools that are considering leaving the conference are highlighted in yellow.) 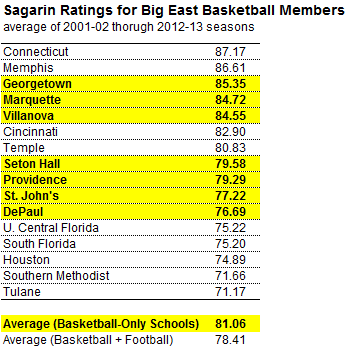 What do these numbers mean, exactly? Mr. Sagarin’s ratings can be used to compare teams with one another, with the difference between two teams representing a point spread. For example, a team with a rating of 84 would be favored to defeat one with a rating of 80 by 4 points on a neutral court.

But the more important comparison is how these ratings match up against those of teams in different conferences. The ratings for individual teams in each conference can be averaged together to determine a conference’s overall strength. 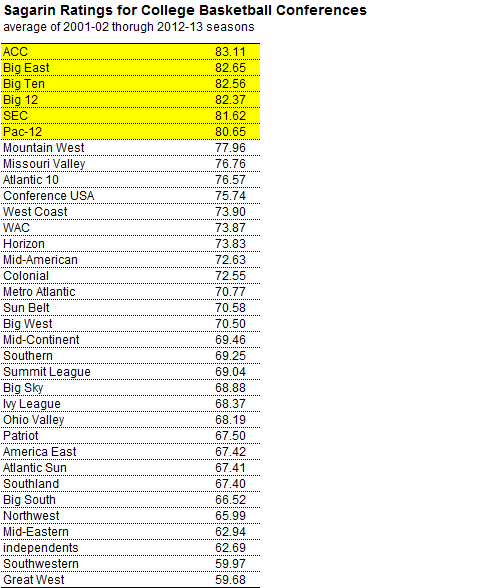 Over the past 10 years, the average rating for the six major college basketball conferences has been 80 points or higher, ranging from 80.65 points (the Pac-12) to 83.11 (the Atlantic Coast Conference.). In contrast, no midmajor conference has had a rating higher than 77.96.

Thus, the seven breakaway schools, with an average rating of 81.06, sit right at the precipice of being a major or a midmajor conference depending on which teams might join them in the league.

The basketball-only schools would be abandoning the University of Connecticut, which has one of the strongest basketball programs in the country. They would also be leaving behind Memphis, which had been set to join the Big East next year.

But most of the other new additions to the Big East, like Tulane and Southern Methodist, have had weak college basketball teams. Even the strongest college basketball conferences can have one or two members that are usually mediocre in men’s basketball and qualify for the N.C.A.A. tournament only once in a great while. However, the Big East would have five such programs — Tulane, S.M.U, Houston, Central Florida and South Florida — all of which have been rated at 75.22 or lower.

These might seem like overly fine points of distinction. But these differences can have an impact when the N.C.A.A. is choosing schools for its 68-team tournament. The N.C.A.A selection committee places a lot of emphasis on strength of schedule. A schedule filled with games against the likes of Tulane may not be viewed favorably when there is a glut of teams that are just on the threshold of being chosen.

Abandoning Connecticut is another matter — but there is no guarantee that it would have remained in the Big East; in the past, it has been linked with discussions to join the A.C.C. and the Big Ten. In the Big East, however, the rule has been survival of the least-fit programs, while those schools with more to offer financially, athletically and academically have been snatched up by other conferences.

By breaking away from the conference, the seven basketball schools would be more in control of their own fate. In fact, they would go from seeing their conference preyed upon to being the predators of the college basketball landscape. The new conference would be highly attractive to any college that did not sponsor a Football Bowl Subdivision team but wanted to play in a top-tier college basketball league. One route would be for the new conference to become a collection of Catholic colleges and universities, adding programs like Xavier, Gonzaga and Creighton, all of which have had strong basketball programs, to its ranks. (Catholic colleges and universities are highlighted in yellow in the chart below.) 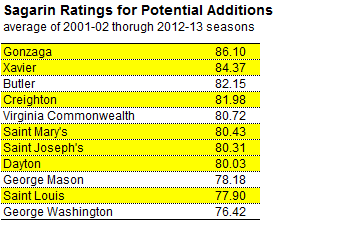 Or the new league could strive to maintain more geographical coherence, adding the strongest Division I basketball-only schools in the Northeast and the Midwest. That could allow it to pair up with schools like Butler and Virginia Commonwealth, which have made successful runs in the N.C.A.A. tournament in recent years.

Either path would allow Georgetown, Villanova and the other programs to remain in a big-time college basketball conference that would attract its share of television coverage, prize recruits and N.C.A.A. tournament positions – even if it were one composed of smaller schools.

A version of this article appears in print on 12/15/2012, on page D1 of the NewYork edition with the headline: Little Downside to Fleeing the Big East.