The New York Knicks did something unusual Monday night: They won a basketball game — just their 17th this season. What wasn’t so unusual — from a franchise that starred in such tragicomedies as Amar’e Stoudemire punching a fire extinguisher and Andrea Bargnani nearly snatching defeat from the jaws of victory — was the Knicks’ poor sense of timing. Having spent most of the season ridding their roster of anyone who could possibly help them win, the Knicks have now won twice in a row.

Those two wins could make a lot of difference to the Knicks’ chance of drafting Jahlil Okafor or Karl-Anthony Towns. With one game left for each team, the Knicks are 17-64, a game better than the Minnesota Timberwolves at 16-65. The Philadelphia 76ers have the third-worst record at 18-63.

That seems like an awfully big difference for teams that are separated by just one or two games in the standings. But it’s how the NBA’s rules work. The number of losses doesn’t matter, only the order of the teams.1

There’s a better way to award those pingpong balls, one that maintains the spirit of the current lottery system without allowing a one-game difference to matter so much.

Here’s how it works. Take each team’s number of losses. Subtract 41 (41-41 represents a breakeven record in the NBA). Then square the result. That’s how many pingpong balls a team gets. (OK, one more provision: A team gets a minimum of 10 lottery balls, including if it has a winning record.2)

That might seem arbitrary — but it produces results that are remarkably similar to the current formula, only fairer. What chance would each team have at the first pick this year, for example? Assuming each team’s final game goes according to the FiveThirtyEight NBA Power Ratings,3 that would leave the Wolves with a 22.0 percent chance at the first pick, the Knicks at 20.3 percent and the Sixers at 18.6 percent. 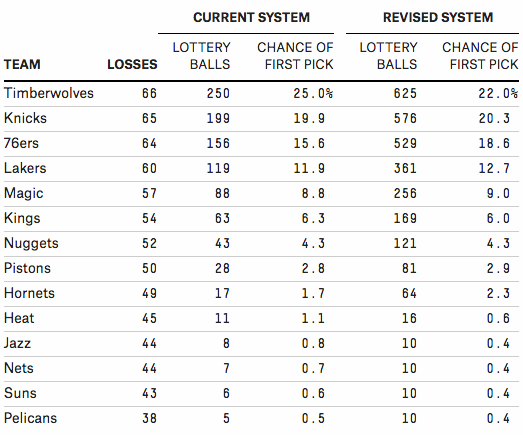 That’s more proportionate to the small difference separating Minnesota, New York and Philly in the standings.

Here’s how the lottery balls would have been distributed in each of the past 10 seasons.4 On average, the worst team would have had about a 25 percent chance of winding up with the top pick, as it does now. But those chances would have been as high as 38.5 percent (for the record-setting 2012 Charlotte Bobcats) or as low as 19.0 percent (for the 2013 Orlando Magic), depending on how much separated the very worst team from the almost-as-bad ones. In a year like 2010, in which there was a big gap between the second-worst team (the 15-67 Timberwolves) and the third-worst (the 25-57 Sacramento Kings), that’s where the sharpest break in lottery chances would have been. 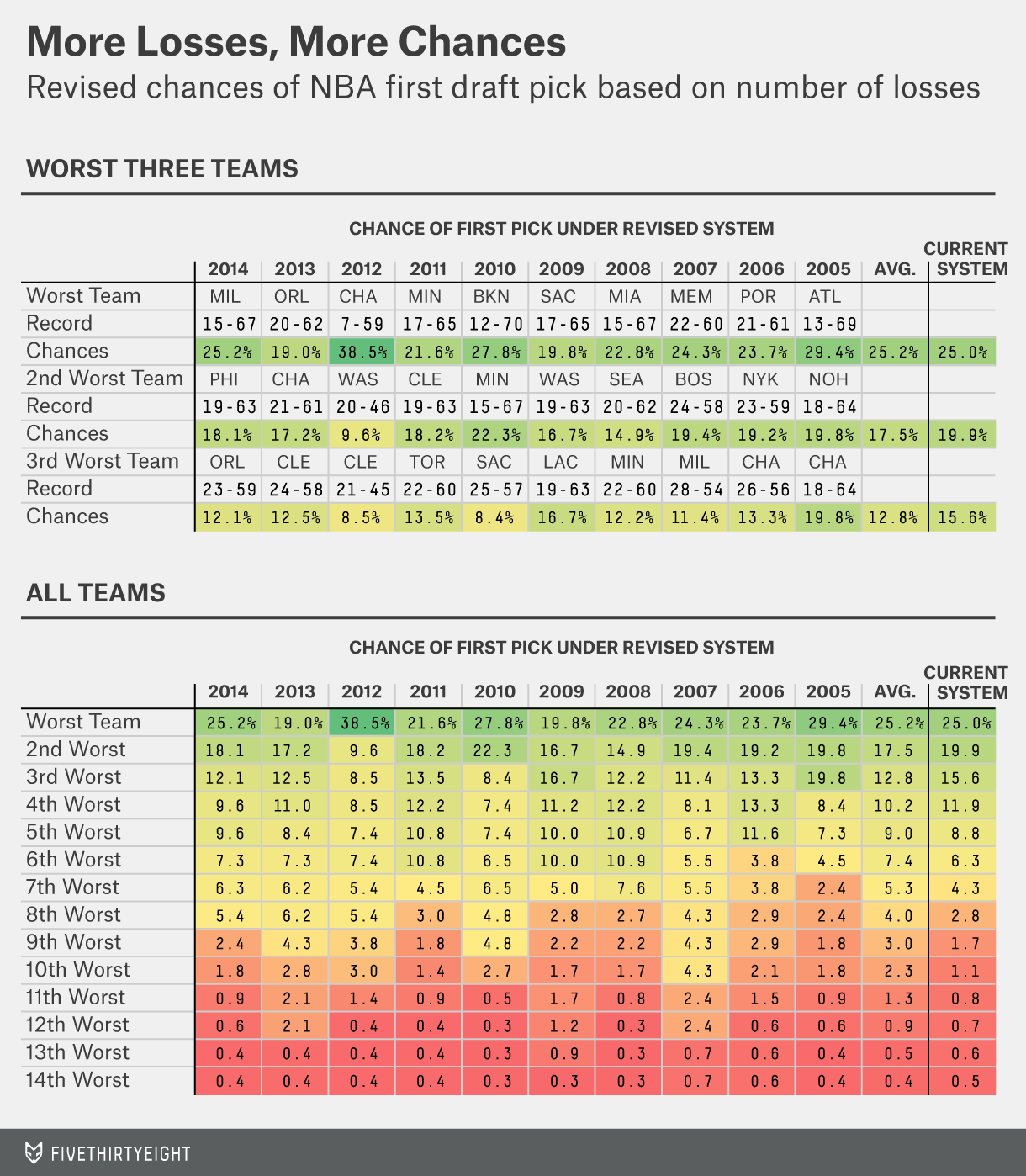 It’s not the radical change that I’d prefer! But it’s a simple enough reform that even the Knicks couldn’t screw it up.

CORRECTION (April 15, 3:36 p.m.): An earlier version of the chart in this post gave the incorrect location of the second-worst NBA team in 2005. At that time, the Hornets were located in New Orleans, not Charlotte.