We continue our Presidential Geography series, a one-by-one examination of the peculiarities that drive the politics in all 50 states and the District of Columbia. Here is a look at Texas. FiveThirtyEight spoke with James R. Henson, the director of the Texas Politics Project at the University of Texas at Austin; Robert D. Miller, the chairman of the Public Law Group at Locke Lord L.L.P.; and Steve H. Murdock, a professor in the department of sociology at Rice University in Houston.

For more than a decade, that thought has provided solace to the out-of-power Democrats who dream of turning Texas blue, much like it was before Ronald Reagan won the state in 1980. The appeal for Democrats is obvious. If President Obama, for example, were somehow able to carry Texas and its 38 electoral votes, the electoral math would become very difficult for Mitt Romney.

A Democratic-leaning Texas may seem like a dream, but for years such a shift has appeared almost inevitable. The Hispanic population in Texas (38 percent) is the second largest in the nation, and it is growing quickly. The African-American population (12 percent) has kept pace with the state’s overall growth. And non-Hispanic whites have been shrinking as a share of the population. 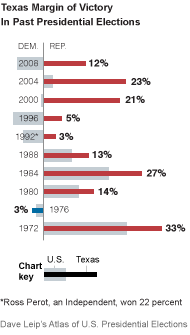 In fact, sometime after 2000, non-Hispanic whites became a minority in the state. They now make up just 45 percent of the population, making Texas the only majority minority state that reliably votes Republican.

Yet, for all the talk of a politically competitive state, the Republican grip on Texas has never loosened.

“We’ve had this discussion for 10 years now, and nothing has changed,” Mr. Miller said.

“There’s been a ‘Waiting for Godot’ nature in terms of Democrats and Latinos here,” Mr. Henson said.

All 29 statewide elective offices are held by Republicans, and Texas Democrats have been left with a series of if-onlys. If only the local party were better organized. If only national Democrats invested more money in the state. If only we could get a charismatic Hispanic candidate on the ballot. And, the most fundamental “if only” of them all: if only Hispanic turnout were stronger.

Poor turnout has dulled the impact of the state’s Hispanic population at the ballot box. Hispanics may make up 38 percent of the population, but they have never exceeded 20 percent of the electorate in presidential elections, according to exit polls.

“Latino turnout is even lower here than it is in a lot of other places,” Mr. Henson said.

Hispanic turnout is creeping up incrementally, but the non-Hispanic white vote in Texas has become overwhelmingly Republican. 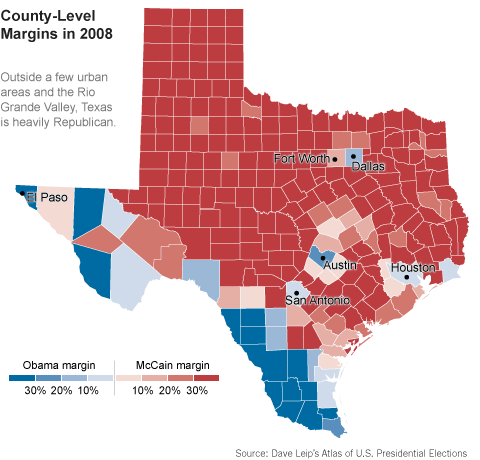 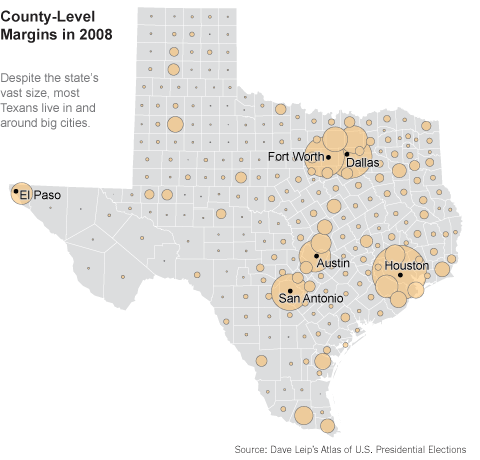 The political landscape in Texas is relatively straightforward. The Democratic strongholds are limited to the major cities — Austin, El Paso, Dallas and to a lesser extent Houston and San Antonio — and the heavily Hispanic Rio Grande Valley.

Republicans are dominant everywhere else, from suburbs to small towns to ranches and farms.

Each of the main cities has a different feel and contributes something unique to the state’s economy. Houston is a center for health care and energy jobs. Austin, the capital, has a flourishing music scene and is a major center for technology start-ups. Dallas has a large African-American community (25 percent) and a little bit of everything economically.

Outside of the cities, Texas has several distinct regions. East Texas is much like northern Louisiana. It is mostly rural, religious and conservative. The Panhandle is also deeply conservative, but feels more like the Great Plains, Mr. Henson said, and includes a streak of libertarianism. 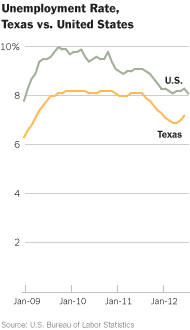 West Central Texas around Midland and Odessa is the chief oil-producing region. Over all, Texas is among the nation’s top energy-producing states, particularly in oil, natural gas and wind. The state’s booming energy industries have helped its economy weather the Great Recession relatively well.

The Dallas-Fort Worth area is home to over six million people, and the two cities are often grouped together. But Tarrant County, which is home to Fort Worth, and Dallas County have separate identities. Dallas is more diverse than Fort Worth, a former cattle town that now revolves around industries like defense.

Non-Hispanic whites are still a slim majority in Tarrant County, which helps make it a much better statewide bellwether than Dallas County. Tarrant County exactly matched the statewide vote in 2008, and was just 1 percentage point more Republican in both 2004 and 2000.

There is little doubt that Mr. Romney will carry Texas. He is a 99 percent favorite in the state, according to the current FiveThirtyEight forecast.

But the long-term trend seems equally clear. Despite poor turnout, the Hispanic share of the electorate has steadily climbed, from 7 percent in 1984 to 20 percent in 2008, according to exit polls.

The larger question is not if Texas will become more competitive, but when, both Mr. Henson and Mr. Miller said. And that largely depends on whether Democrats can improve turnout among Hispanics. They have a few things working against them.

First, the Texas Democratic Party has been out of power for a long time, with few elections to truly contest. “The party in the state has really atrophied,” Mr. Henson said.

Second, Hispanic culture in Texas has so far not placed a high value on participating in the electoral process, Mr. Miller said.

Even if Texas Hispanics do start punching their weight, the Republicans could make efforts to win their support. Partisan allegiances among Hispanics could become more balanced.

Those obstacles notwithstanding, there is no doubt that as the minority population in Texas has grown, so too has the potential for the state to become less firmly Republican. And there are already signs of a possible future: Mayor Julián Castro of San Antonio, a rising star in Democratic politics, gave the keynote address at the national convention in Charlotte, N.C.

But that Democratic comeback — whether led by Mr. Castro or someone else — may still be years away. In the meantime, Democrats will have to continue to wait.