In the face of the continued threat of the coronavirus, many Americans won’t be voting in person on Election Day. Instead, polls show that a much larger share of voters intend to cast ballots by mail or vote early in person than in previous elections.

For instance, in a recent AP/NORC poll, as many as 54 percent said they would vote early this year — whether by mail or in person. If that happens, that would mark a massive shift from 2016, when just 40 percent of voters voted early, according to the U.S. Election Assistance Commission.

Who votes early, though, hasn’t historically mattered that much. There is, for example, no evidence of a big partisan split. There also aren’t any really big gaps by race that aren’t explained by geographic differences (early voting rules differ by state). Broadly speaking, voting early is something that has steadily grown in popularity but is still largely dependent on where someone lives. 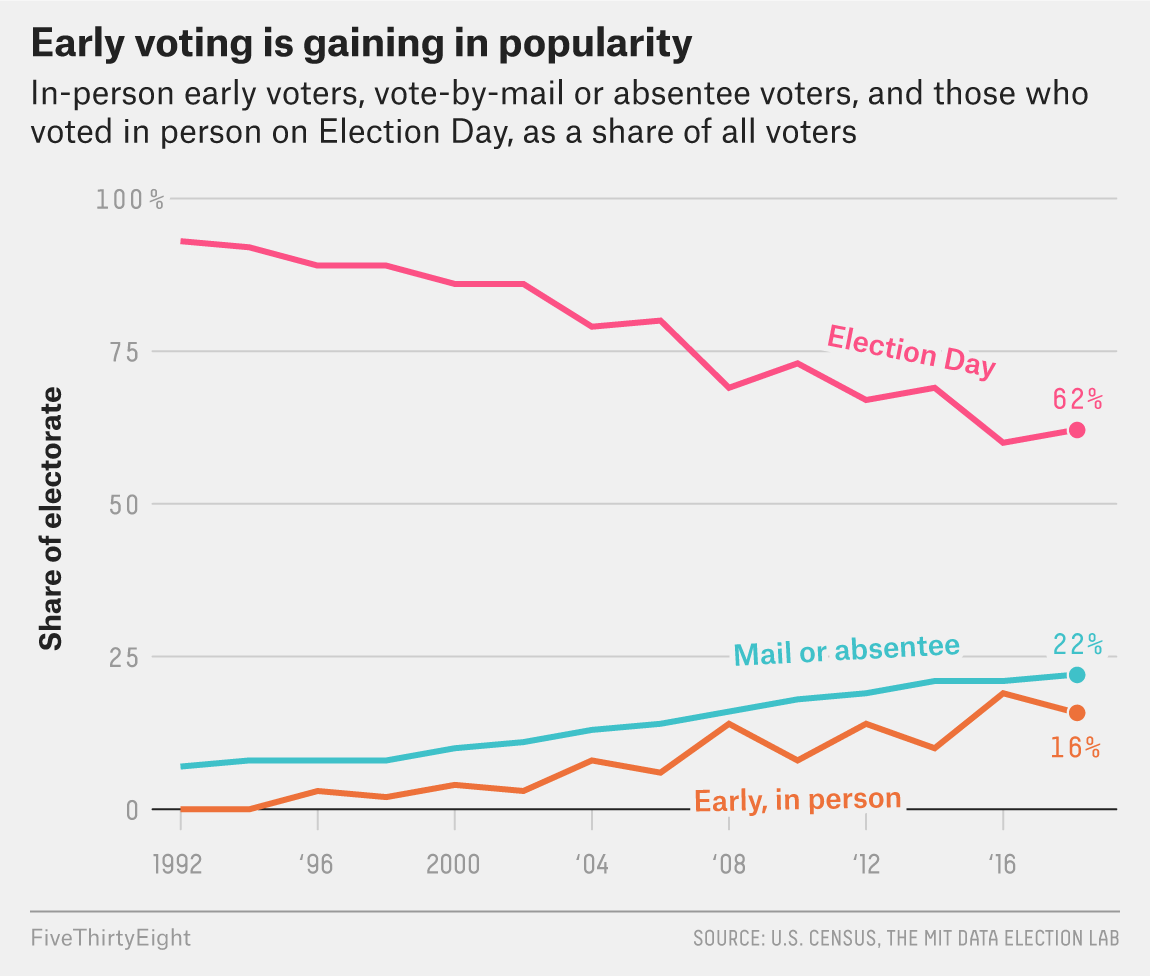 But that could change this year.

Charles Stewart, a political scientist at MIT and director of its Election Data and Science Lab, told me that, “Prior to 2020, differences in racial makeup or use of these different [voting] modes was driven by where you live, what the opportunities were, what the campaigns were encouraging people to do,” but in 2020, he said, “It’s varying heavily according to what party you’re in.”

Polls show that Democrats are far more likely than Republicans to say they’ll vote early, sometimes by as much as 31 points. This means it’s not only likely that there will be a partisan split in ballots cast this year, but we might also see a change in voting behavior among many non-white voters, since they are much more Democratic-leaning than white voters.

This is especially true for Black voters, whom polls suggest are now 25 percentage points more likely to cast an early ballot than they were in 2016.

Granted, the share of voters who plan to cast an early ballot is up across the board, but the increase among Black voters truly stands out. In fact, based on the polls we looked at, it’s possible that around one and half times as many Black voters will cast an early ballot in 2020 compared to 2016. This could potentially make a big difference in battleground states, where we see signs high shares of Black voters are saying they will vote early.

However, there are still real questions about how much Black voters trust the early voting process. A number of polls have found, for instance, that Black voters are more concerned about casting mail or absentee ballots. Studies have also shown that Black and Hispanic voters have their mail ballots rejected at a higher rate than white voters. And according to an early August survey from the Voter Participation Center, two-thirds of Black voters in six battleground states thought their vote was more likely to count if they voted in person, so there’s definitely a tension between how Black voters might prefer to vote in “normal” times and what they are planning to do in the face of the coronavirus.

But despite those concerns about not voting in person, Black voters look set to sharply increase their rate of voting by mail. In fact, our average of recent polls suggests Black voters might be almost as likely as Hispanic and white voters to use a mail ballot this fall, even though they’ve historically been less likely to vote that way, according to the Survey of the Performance of American Elections. (Instead Black voters have tended to vote in person early more than white or Hispanic voters.)

Latino voters, however, may be the most likely to vote by mail in 2020, which may have to do with the fact that many Hispanic voters live in states where voting by mail is the norm. Additionally, states with large Hispanic populations like Arizona, California and Florida have greatly expanded access to voting by mail in recent years. In fact, almost half the country’s Hispanic population lives in states that entirely vote by mail or have high rates of mail balloting.

This doesn’t mean that Latino voters aren’t concerned their vote won’t be counted, however. Similar to Black voters, Latino voters expressed doubts about their vote being counted if they voted early. Not to mention, despite states expanding access to voting by mail this year, there is still the question of whether Americans will trust the U.S. Postal Service to handle their ballot, as there are concerns that the USPS will be unable to handle the increase in volume of mail ballots. This, in turn, could affect how many voters actually end up voting by mail.

That leaves voters with one other alternative to cast their ballot early: voting in person before Election Day. Yet at the moment, it doesn’t look like there will be a huge uptick in the use of in-person early voting. Recent polls found that about a fifth of voters intend to go to the polls in person before Election Day, which is very similar to the share of voters who cast their ballots this way in 2016. There is one exception: Black voters are much more likely than white and Hispanic voters to say they will vote early in person. In fact, according to recent polls, we could see a 9-point change in how many Black voters vote in person early from 2016.

Part of this is because Black voters are just more familiar with in-person early voting. Roughly 60 percent of Black people in the U.S. live in the South, where voting in person early is more prevalent. In fact, campaigns in that region have long urged voters to go to the polls early with get-out-the-vote initiatives like “Souls to the Polls,” which encourages Black churchgoers to vote on the Sunday before the election. Additionally, calls to vote early in person by leading Democratic voices like Michelle Obama may also influence Black voters’ voting plans this year. Still, it’s worth noting that eight states will not offer early in-person voting in 2020, including four states with populations that are at least 20 percent Black: Alabama, Delaware, Mississippi and South Carolina.

Of course, how voters plan to cast their ballots could change between now and Election Day. Nonetheless, it’s pretty clear that there will be a sharp uptick in early voting, especially among Black voters. Much of that change seems to be driven by an increased preference to vote by mail, although more Black voters look set to use in-person early voting, too. At the very least, we can probably expect far fewer votes to be cast in-person on Election Day.