Every month, somewhere in my “jobs day” writeup, I remind readers that these are noisy numbers, subject to big revisions and even bigger margins of error. Usually I put that reminder toward the bottom of my story.

This month, it’s going at the top.

On the surface, Friday’s jobs report is unequivocally good news: U.S. employers added 288,000 jobs in April, the most in more than two years. The unemployment rate plunged 0.4 percentage points to 6.3 percent, the lowest it’s been since Lehman Brothers filed for bankruptcy in September 2008. 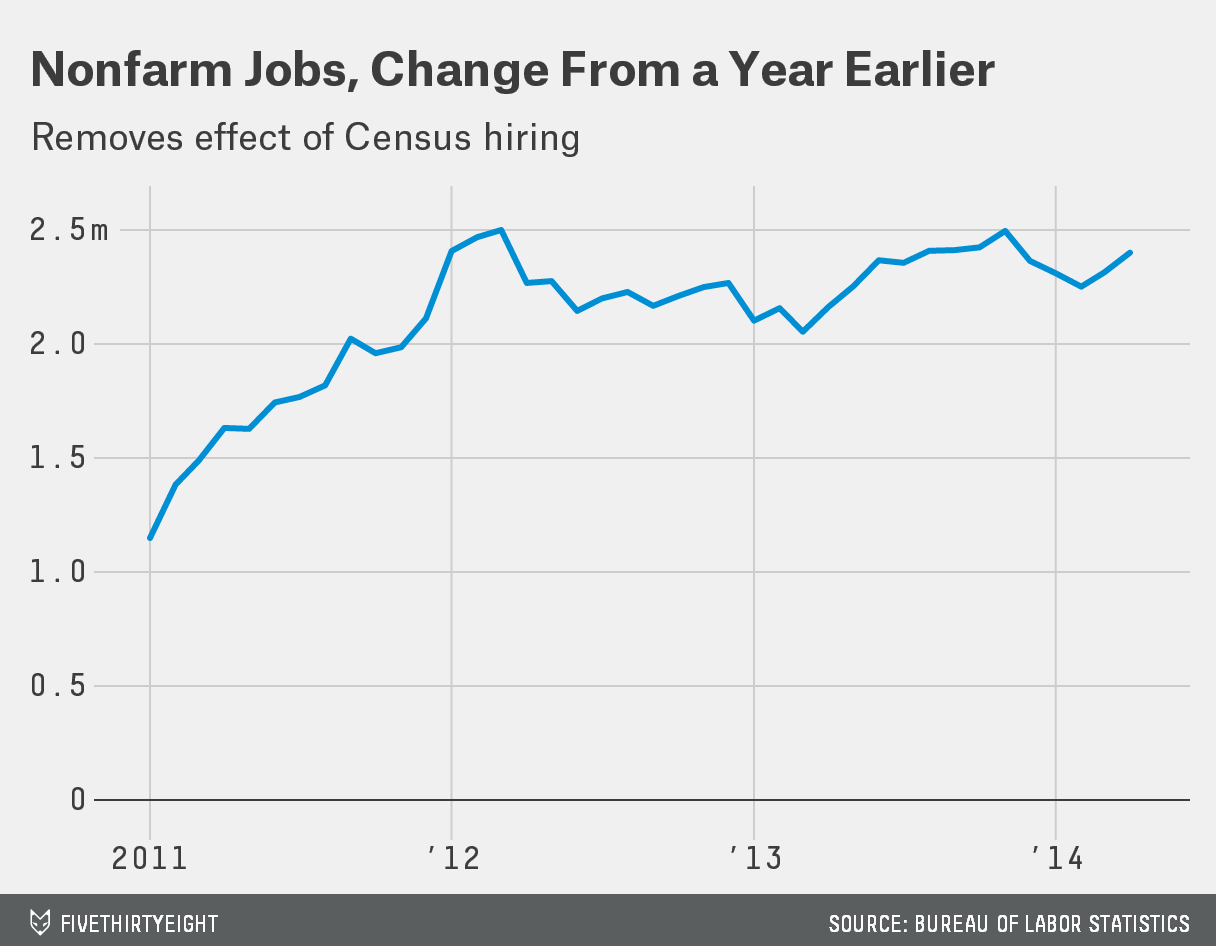 So why focus on the uncertainty? Because in many ways, this was a very strange jobs report.

Start here: The number of jobs rose by 288,000, but the number of Americans who are employed fell by 73,000. How is that possible? The two numbers are based on separate surveys, one of businesses (which gives us the number of “nonfarm jobs” added or lost each month) and one of households (which gives us the number of people who are employed and unemployed). Theoretically, it’s possible for one to rise and the other to fall, because one person can have multiple jobs. But more often, when the two surveys diverge, it’s the result of measurement error.

Then there’s that huge drop in the unemployment rate, the biggest since December 2010. The government only considers people unemployed if they’re actively looking for work, and 733,000 fewer people met that definition in April than in March. The biggest drop was among people joining the labor force to look for work (either restarting a previously abandoned job search or entering the labor force for the first time, such as after graduating from school). That’s hardly a sign of confidence.

Dig deeper into the report, and things don’t get any clearer. If more companies are hiring and fewer people are looking for work, the law of supply and demand says that should drive up wages. But average hourly earnings were flat in April and are up just 1.9 percent over the past year. Businesses aren’t asking their employees to work more either: The average workweek was flat, and overtime hours fell.

With all that noise, do we know anything today that we didn’t know yesterday? Yes. Here are a few things we can say with at least a reasonable level of confidence.

The job market is improving: In general, most economists consider the survey of businesses more reliable than the survey of households — it’s larger, and the data comes straight from company payrolls. According to that survey, the annual rate of job growth is at its highest level since November. The Bureau of Labor Statistics also said hiring was better in February and March than it initially believed, which is encouraging given how weak economic growth was in the early months of the year. And the household survey, for all the noise, suggests the number of people who are out of work continues to fall.

Things are still tough for the unemployed: The share of unemployed workers finding jobs inched up in April to 22 percent, the best mark of the recovery. But for the 47th time in 48 months, more unemployed workers stopped looking for work than found jobs. People who have stopped looking for work aren’t rejoining the job market. The number of people out of work for more than six months fell to its lowest level of the recovery, but it still remains high at 3.5 million, and there’s little sign that the decline is due to the long-term unemployed finding jobs.

There is still slack in the labor market: One of the key questions among economists in recent months has been how much “slack” there is in the job market. In plainer English: By how much does the supply of labor (workers who want jobs) exceed demand (companies that want workers)? The big drop in the unemployment rate is a sign there’s less slack than there used to be. But anemic wage growth suggests most companies aren’t having much trouble finding workers when they need them. Meanwhile, the number of people working part time because they can’t find full-time jobs remains high and has actually risen for consecutive months. That suggests plenty of people want to work more.