Super Tuesday was a long and bumpy night full of highlights and low lights for each candidate that ended in an underwhelming but basically successful outcome for Mitt Romney. In other words, it was like pretty much everything else in the Republican primaries to date.

Not all of the delegates have been counted yet, but once they are, Mr. Romney should come extremely close to the tally that we projected for him beforehand of about 224 delegates — just slightly more than half of the number that were at stake. The only state where there was a significant deviation was in Tennessee, where a late surge in the polls did not manifest itself, and Mr. Romney might finish several delegates below the projection of 19. In every other state, he should be within about three delegates of the forecast.

It should not really be surprising that Mr. Romney lost Tennessee — not when more than 70 percent of the turnout consisted of evangelical voters and when his path to victory depended on the bankshot of his winning about a third of the vote and Newt Gingrich and Rick Santorum splitting the remainder of it almost exactly evenly.

Nor should it be surprising that the margin in Ohio was very close; that’s pretty much what the polling had projected ahead of time. My sense had been that expectations were running a little bit ahead of the objective evidence on how well Mr. Romney might do in Ohio, an inherently middling state for him in which he never built a polling lead outside of the margin of error and still trailed in some late surveys.

But if there was a little bit of irrational exuberance about Mr. Romney’s prospects — and if Ohio and Tennessee served as a reminder that sometimes the candidate with the apparent momentum does not overperform his polls on Election Day — that was not really Mr. Romney’s fault; his campaign was more careful to manage expectations than in some previous instances.

Republican voters have gotten a good, long look at Mr. Romney; they find him likeable enough and not much more than that. Were his vote total just 3 percent lower in every state, distributed among the other candidates in some reasonable fashion, he would have lost Ohio and Alaska on Tuesday, and Michigan and Maine in February — and would have clearly lost Iowa rather than having “tied” there. But it wasn’t, and he didn’t. Mr. Romney has skirted a thin line throughout the Republican primaries — and has almost always ended up on just the right side of it.

Somebody has to win his party’s nomination every four years. In a party where all living past presidential and vice presidential nominees are either too old or too unpopular to be viable candidates, the odds increase that it will be someone with some flaws. Plenty of candidates have followed Mr. Romney’s basic trajectory toward the nomination, including Jimmy Carter in 1976, Walter Mondale in 1984, and Michael Dukakis in 1988. John McCain, in 2008, was not all that far from it.

If Super Tuesday once again demonstrated that Mr. Romney is not likely to win the nomination by acclamation, it also demonstrated (once again) that all of the other candidates have deeper flaws. Mr. Santorum had a good night relative to expectations, but his path does not appear to be a majority one, carving through a swath of prairie states that contain 40 percent of America’s landmass but perhaps 20 percent of its population — and not extending quite as far east as Ohio or Michigan, or quite as far west as Arizona. 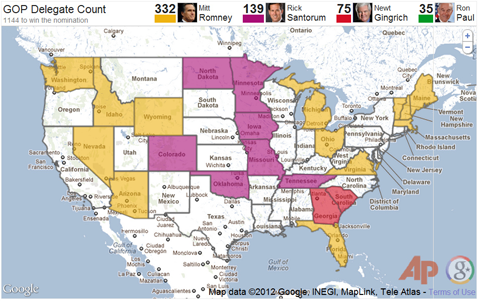 Mr. Gingrich had exceptionally little success outside of Georgia, finishing third or worse in every other state.

Ron Paul had yet to win a state — and he was not likely to find a better set-up than in Alaska, a low-turnout caucus in a state with a relatively young and libertarian-leaning electorate that has little patience for politics-as-usual. He finished third there.

If you were expecting the kind of dominant candidate who could win North Dakota and Tennessee despite once having governed as a moderate in Massachusetts, you will have been disappointed in Mr. Romney. You would also have been paying very little attention to national politics for the past year. Dominant candidates do not trail people like Herman Cain and Donald Trump in the polls. They do not lose the national polling lead to Mr. Gingrich after winning New Hampshire, or to Mr. Santorum after winning Florida.

If instead you were expecting the kind of candidate who is very likely to win the Republican nomination despite losing North Dakota and Tennessee, you would have found your man.