Let me say up front that I have some mixed feelings about The New York Times’s metered model, which takes effect on March 28. I’d encourage you to read my colleague David Carr’s take, as well as some of the many analyses that have been circulating throughout the print and digital media.

For our readers who have been focused on real news — instead of news about the news industry — the most salient details are that after you’ve read 20 articles at NYTimes.com over the course of four weeks, The New York Times will ask you to buy a digital subscription to continue reading until your counter resets.

But there are numerous exceptions. Print subscribers can read everything for free. Links from Twitter, Facebook, other blogs and news outlets will always work, even if you’ve exhausted your allotment of free articles for the month. So, with some limitations, will those from search engines. Certain items and features, like breaking news articles, will always be free.

So if you really want to read a FiveThirtyEight article — and we, of course, hope you will — there will always be a multitude of ways to do it, some of them involving paying The New York Times and some of them not.

I do not have a philosophical objection to pay models. Long before I started FiveThirtyEight.com, which was advertising-supported, I wrote for (and helped to manage) Baseball Prospectus, which was an early adopter of a pay model in 2003. Both businesses worked well enough in their own way. At the same time, given that FiveThirtyEight is my current business and that my readers are used to reading as much of its content as they want, I would not have moved it to The New York Times had it been planning on a more rigid “paywall” structure, like that employed by The Financial Times or The Wall Street Journal.

There are also some armchair-quarterback critiques I have about the details of The Times’s model; you’re welcome to ask me about them if you catch me out drinking a coffee or beer somewhere.

I’m less sympathetic to the notion, however, which I’ve heard in some quarters, that there are a lot of good substitutes for The New York Times. Certainly there are some good substitutes: depending on the type of coverage you’re looking for, The Washington Post or The Wall Street Journal or CNN or ESPN.com. Of course, some of these substitutes already charge for digital access, are also having trouble balancing their budgets, or both.

But, as I’ll aim to demonstrate below, there aren’t a lot of substitutes. A very small number of news outlets account for a very large share of the English-language reporting that is of national or international interest. And with very few exceptions, they are all what we might think of as “traditional” news organizations.

The way I’ve determined to study this is pretty simple. I’ve tracked the number of times that the publication’s name has appeared in Google News and Google Blog Search over the past month, followed by the word “reported.” For instance, to track the number of citations for The Chicago Tribune, I’d look for instances of the phrase “Chicago Tribune reported.” (In some cases, I’ve permitted multiple search terms for the same news outlet — for example, both “BBC reported” and “BBC News reported.”)

Just as obviously, there are many types of valuable content — including much of the content I produce for FiveThirtyEight — that would not ordinarily be referred to as reporting. But my goal here is to track original reporting specifically, especially on national and international affairs, since it tends to be the most expensive content to produce.

I’ve tallied the citations for 260 different news outlets. The list includes all blogs ranked in the Technorati top 100, all newspapers ranking in the top 100 in daily United States circulation, all English-language newspapers ranking in the top 100 in global circulation, and all news sources in the Memorandum top 100, which contains a mix of traditional and “new media” sources. I’ve also included another 25 or so outlets, like The Financial Times, that didn’t meet any of these criteria, but which belong in the discussion. The list isn’t absolutely comprehensive, but it ought to do a pretty good job.

The 30 outlets that were cited most frequently are listed below. (You can also find a more comprehensive version of the list here.) 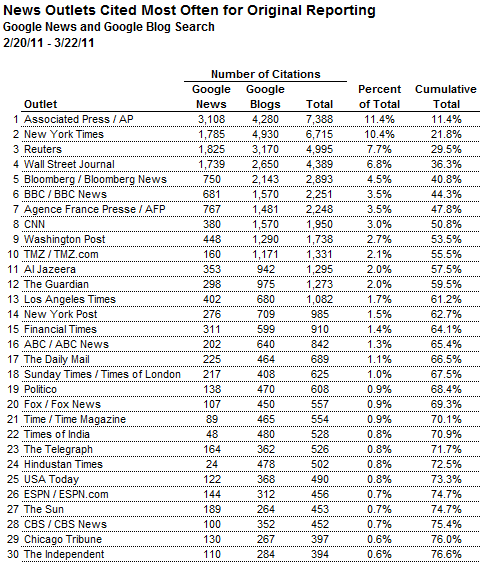 The Associated Press, with 7,388 citations, is the top-ranked news organization; as a nonprofit corporation, it is cited most frequently by the American newspapers and broadcast outlets that make up its members. The New York Times, second on the list, is cited more often by bloggers.

Collectively, just eight of the 260 organizations accounted for more than half the citations for reporting. These consist of four wire services (two of which concentrate on financial news), two television networks (the BBC and CNN), and two newspapers, The Wall Street Journal and The New York Times, one of which already charges for digital access.

So The Times, and to some extent also The Washington Post, which ranks No. 9 over all, are relatively unique in this respect. The other organizations that do a comparable amount of original reporting have different types of business models.

Largely absent from the list are organizations that began without some broadcast or print component. The clearest thing to an exception is TMZ, which has a dominant presence in reporting on celebrity news. (TMZ began as a collaboration between Warner Brothers and AOL, so it does not have the pedigree of a mom-and-pop blog.)

Other online organizations that do relatively well include The Huffington Post, which ranks No. 37, TechCrunch, which ranks No. 47, and Mashable, which ranks No. 59. Some of these outlets, as well as others that rank lower on the list, do some fine reporting and otherwise produce terrific content.

But for the most part, they tend to concentrate in particular areas like technology, where profit margins are higher, and their overall share of the news pie is small. The organizations that I designate as online-only (these are indicated in yellow in the long version of the chart) accounted for just 5 percent of the total citations.

It is possible that there is some bias among traditional news organizations in their unwillingness to cite, or to properly attribute, reporting by blogs and other types of online outlets. In the count for citations at Google News, which mostly consists of traditional outlets, the online organizations registered just 3 percent of the total citations. Even among the citations at Google Blog Search, however — where the tables might be turned the other way — they accounted for just 6 percent.

I don’t mean for this to sound like a value judgment. My roots are in the blogosphere and to a large extent my sympathies remain there. Like Mr. Carr, however, I would warn that checks from The New York Times now pay for my rent (as well as my hamburgers), so you ought to take that into account.

But fundamentally, the sort of reporting that organizations like CNN, The New York Times, The Associated Press, the BBC and Al Jazeera do (why isn’t Al Jazeera in my 800-channel cable lineup?) doesn’t come cheaply — especially in parts of the world like Libya, Egypt, Haiti and Japan. From an economic standpoint, it is essentially a loss leader.

The traditional way of subsidizing this reporting — through monopoly profits on print advertising — is not working as well as it used to, so news media organizations are looking to alternatives. Some, like the BBC and Al Jazeera, get government support. Bloomberg does some very good and very ambitious reporting, but it is subsidized by selling terminals. Even the nonprofit A.P.  licenses their content beyond traditional news outlets.

The Times is trying a different approach now, a metered model, and if you have both an appreciation for the paper and the means to pay, it’s something to consider. (My compensation is not tied to subscriptions in any way, so it won’t mean any more hamburgers.) If not, you might want to subscribe to our Twitter account.

For those who are not interested in paying, the only thing I can promise you is that I will work to ensure that any clicks you make to a FiveThirtyEight article will be “worth it.” I’ve always had a pretty high word count, but in recent months, I’ve been gravitating toward even longer and more substantive posts, as opposed to shorter but more frequent ones.

It goes against Blogging 101 principles, but I’ve had a lot of success in life in betting against the conventional wisdom.