Time to think about the unthinkable. What if a major hurricane were to pass close to New York City, as several forecasting models now suggest that Hurricane Irene might?

Apart from the potential loss of life in the most densely populated part of the country, history suggests that the economic damage could run into the tens of billions of dollars, depending on the severity of the storm and how close it comes to the city. Unlikely but theoretically plausible scenarios could have the damage entering the realm of the costliest natural disasters of all time, and perhaps being large enough to have a materially negative effect on the nation’s gross domestic product.

Tropical cyclones in and around New York City and the Northeastern United States are fairly rare but not unprecedented. Using a relatively conservative set of criteria, I have identified 20 storms since 1900 that have made landfall north of the Mason-Dixon line with tropical-storm force winds (at least 39 miles per hour) or higher, 12 of which made direct hits on either Long Island or New Jersey.

The table below provides several key pieces of data for each storm. First, how close the eye of the storm was to New York City (specifically, Midtown Manhattan) at its closest approach. Second, what the storm’s maximum sustained wind speed was at that time. And third, how much economic damage it was estimated to have caused. 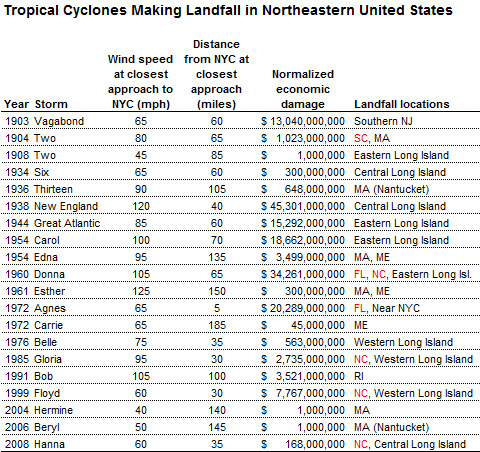 Some further detail is in order. Storm tracks and wind speeds are estimated from the excellent Web site Stormpulse.com. The only case where my estimates differ meaningfully from Stormpulse are for the 1938 New England Hurricane, for which the last recorded estimate of wind speed, when the hurricane was about 100 miles south of Long Island, was 100 miles per hour, but which forensic evidence suggests was producing winds closer to 120 miles per hour when it actually made landfall. (More on that 1938 storm in a moment.)

Most of the economic estimates are taken from a 2008 paper by Roger A. Pielke, et. al., which adjusts nominal estimates of storm damage not only for inflation, but also for the growth in wealth, population and property values, allowing for the comparisons to be more apples-to-apples. Some of the storms, particularly those that occurred prior to the 1930s or after the paper was written, were not included in Mr. Pielke’s data set; in these cases, I have tried to reproduce his methodology. Three of the storms are described in news accounts as having produced “minimal” economic losses; I assign these a nominal cost of $1,000,000. Mr. Pielke’s estimates are in 2005 dollars; I adjust each of them upward to 2011 figures using standard estimates of inflation.

The criteria for inclusion in the table are as follows:

The first qualification is the fuzziest. There have been several storms that initially made landfall in the Carolinas or in other parts of the South, and retained enough power to be classified as tropical storms while passing through the Northeast, but which never again reached the open ocean. Such storms are not included in the study as their behavior is fairly different from storms that come in directly from the coast. They may be considerably less well organized, acting more like a very severe thunderstorm and less like a hurricane.

However, storms that hit the South, re-emerge over the open ocean and reorganize themselves and then make a second and distinct landfall in the Northeast are included in the study, a pattern that has occurred on at least six occasions. Some cases are debatable: I do not classify a storm as having made a second landfall if it passed over a small body of water like Delaware Bay, but I do include it if it passed through the Atlantic Ocean proper, even briefly, as Hurricane Floyd did in 1999.

There are several storms that should pique your curiosity. First was the 1938 New England Hurricane, which is often cited as a reasonable worst-case scenario for what might happen to New York. That storm approached within about 40 miles of Central Park while producing wind speeds of 120 miles per hour, making it a Category 3 hurricane. The direct and indirect economic loss, according to Mr. Pielke’s estimates, was the equivalent of about $45 billion in today’s dollars, or roughly half as much as the impact caused by Hurricane Katrina.

Another dangerous precedent is Hurricane Agnes in 1972, which came closer than any other to producing a direct hit on Manhattan, with the storm’s eye approaching just a handful of miles from the city. That storm followed an unusual trajectory, initially hitting the Florida panhandle through the Gulf of Mexico and traveling almost as far north as Atlanta, but then reorganizing after passing through the Carolinas, and hitting New York at about a 45 degree angle from the southeast. 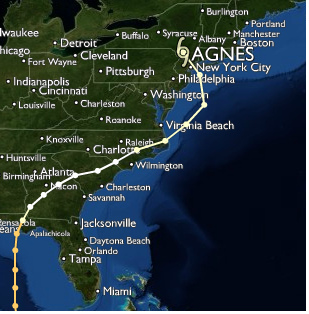 Hurricane Agnes is not an especially good comparison for Hurricane Irene, which never came close to the Gulf of Mexico. But what is scary is that it produced the equivalent of $21 billion in economic losses, despite having wind speeds of only about 65 miles per hour — tropical-storm strength rather than hurricane strength — when passing through New York City and the Hudson Valley. Some of those losses were incurred in the South rather than in New York, but it is nevertheless a warning sign that proximity to the city matters.

The so-called Vagabond Hurricane of 1903, by some definitions the only modern hurricane ever to have made its initial landfall in New Jersey, produced about $13 billion in losses, despite the storm’s eye never having come within more than about 60 miles of Manhattan.

But other storms have been much more benign than might be expected. In particular, Hurricane Gloria in 1985, despite having made landfall relatively far west on Long Island and having hurricane-strength winds at the time, resulted in only about $3 billion in economic damage. Hurricane Belle in 1976, although just teetering on the brink of hurricane strength when it made landfall, caused just one fatality and less than $1 billion in economic damage.

Factors like the diameter of the storm, the speed with which it passes though the region (faster is better) and whether it strikes at high or low tide can have a profound effect on damage to life and property. These will not be well accounted for by maximum wind speed. Unfortunately, those factors will not necessarily work in favor of New York in the case of Hurricane Irene, a stubbornly large and slow-moving storm that, according to some projections, may be more likely to hit at high tide, producing a large storm surge.

Nevertheless, we have enough data to produce some ballpark estimates — sort of an over-under line — on how much economic damage a storm might produce based on its distance from New York City and the strength of its winds. The results of this exercise are not heartening.

The procedure I have used to estimate economic damage — this is going to get a tiny bit technical — is to regress the logarithm of economic damage on three independent variables. The first two variables are the storm’s wind speed, and the distance of the storm from New York City, at its closest approach to Manhattan. The third variable is how many fatalities the storm caused in the Southern United States (these were significant in the cases of Hurricane Donna in 1960, Hurricane Agnes in 1972, and Hurricane Floyd in 1999), which is used as a proxy to segregate out damages caused in the South from those in the Northeast in the case of storms that made multiple distinct landfalls. The figures I am going to show you, therefore, reflect estimates of the economic damage to the Northeast from various types of hurricanes, including but not limited to the New York City metro region. 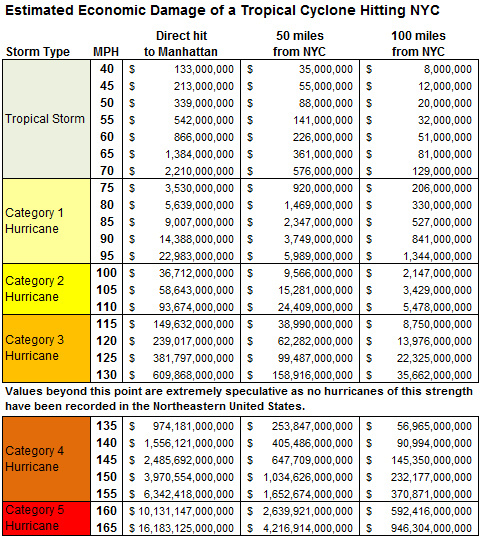 The numbers do not paint a pretty picture. According the model, a hurricane with wind speeds of about 100 miles per hour — making it a “weak” Category 2 storm — might cause on the order of $35 billion in damage if it were to pass directly over Manhattan. Such a storm would probably flood New York’s subway system as well as acres upon acres of prime real estate in neighborhoods like the East Village, the Financial District, TriBeCa, Coney Island, Red Hook, Dumbo, as well as parts of Staten Island and most of the Rockaways.

Although far from the most likely scenario, this may represent a reasonable-worst-case estimate of what could happen if Hurricane Irene took exactly the wrong turn at exactly the wrong time. National Weather Service models, as of this writing, estimate that there is a 5 to 10 percent chance that Manhattan could experience hurricane-strength winds. Local readers should stop what they are doing and check to see whether they are in one of New York City’s hurricane evacuation zones.

A $35 billion loss is equivalent to roughly half of New York City’s annual budget, so the city would require significant assistance from state and federal authorities. It is also equivalent to about 1 percent of the United States’ quarterly gross domestic product, so such a storm could tangibly increase the chance of a recession.

The good news is that such a storm would have to make something of a bank shot, as Hurricane Agnes did in 1972, in order to pass directly over New York City. It is intrinsically fairly hard for a storm to make landfall upon New York City itself rather than somewhere else along the Atlantic.

A considerably more likely scenario is that a hurricane-strength storm would come ashore on central Long Island. That would still be extremely bad: a weak Category 2 storm with an eye that passed about 50 miles from Manhattan would result in about $10 billion in damage, according to the model.

Although highly unlikely to be experienced in the case of Hurricane Irene, it is theoretically possible that an even stronger storm might hit the city at some point in the future. A Category 3 hurricane, one with wind speeds of 111 miles per hour or higher, could plausibly produce an economic impact in excess of $100 billion if its eye were to pass directly over Manhattan, according to the model. A stronger Category 3 storm, passing immediately over Manhattan, could rival or exceed the roughly $235 billion in economic damage estimated to have been caused by the Japanese earthquake and tsunami.

What happens beyond that gets into highly speculative territory: in recorded history, no storm has made landfall in the Northeastern United States while stronger than a Category 3. Meteorologists debate whether a Category 4 storm hitting New York is literally physically impossible, so unlikely as to be practically impossible, or a plausible occurrence but one that will happen less than once in a generation. One of the nastier potential consequences of global warming is that tropical cyclones could retain more momentum as they travel through the Eastern Seaboard, broadening the range of potential worst-case scenarios.

If such a storm were to occur, it would be exceptionally devastating to New York City, and its economic effects would plausibly run into the trillions of dollars, tantamount to the estimates that some scholars have provided of a Tohoku-strength earthquake striking directly under Tokyo (something that almost certainly is physically possible). Keep in mind that New York’s annual gross domestic product is estimated to be about $1.4 trillion — about one-tenth of the nation’s gross domestic product — so if much of the city were to become dysfunctional for months or more, the damage to the global and domestic economies would be almost incalculable. The property value of New York City real estate, meanwhile, is estimated to be about $800 billion, and property damage represents only a portion of the overall economic loss that might be incurred from a catastrophic hurricane.

These scenarios are exceptionally unlikely to be visited in the case of Hurricane Irene, an extraordinarily dangerous but not apocalyptic storm. But New York may be put to the test. Stay safe.