The recent turnaround in domestic oil production has been stunning. Armed with new drilling techniques, new financing schemes and a new understanding of how to coax oil out of formations once considered too costly to be worth the effort, the U.S. oil industry has reversed nearly two decades of decline in just five years. From 1991 to 2008, domestic production dropped every year, for a total decline of 33 percent. Since then, daily production has risen 49 percent; the 7.4 million barrels of oil pumped in the U.S. each day last year was the most since 1989.

The drilling boom has nearly stretched from coast to coast, with oil companies tapping new fields from Ohio to California. But when it comes to actual production, the rebound is really about just two states, Texas and North Dakota. Those two states account for 88 percent of the post-2008 increase. (Natural gas is a different story. That boom, which began earlier, has been more widespread.)

The table below shows the top five oil-producing states in 2013. Together with the federally owned Gulf of Mexico, those states account for more than 80 percent of all domestic oil production.

Top Oil-Producing States (In Thousands of Barrels Per Day) 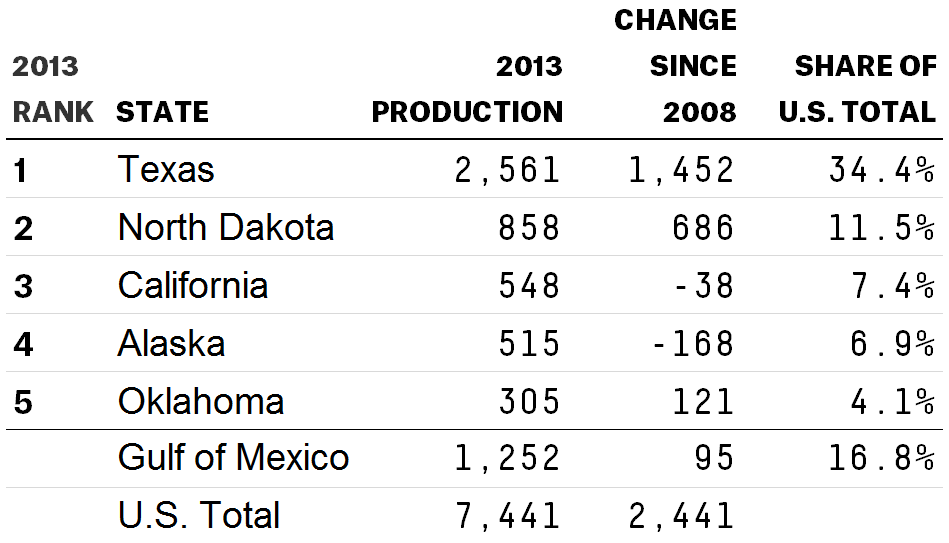 Notice a few things: First, the gap between Texas and every other place is huge. The Lone Star State pumps more oil than the next four states combined. And Texas’s production is growing fast: It has more than doubled since 2008 — a gain of nearly 1.5 million barrels a day, or 59 percent of the total increase in U.S. production over that period.

Then there’s North Dakota. In 2008, the state didn’t even make the top five, even though it was three years into its boom. Since then, production has nearly quintupled, vaulting the state into second place.

Meanwhile, Alaska and California, which long ranked second and third, have seen their production continue to slow. Production in the Gulf of Mexico, still recovering from the drilling moratorium that followed the 2010 Deepwater Horizon oil spill, has fallen for four straight years and is barely above its 2008 level.

Several other states have seen production rise, in some cases quickly. But in terms of total barrels of oil, they barely register. That could change, of course. Colorado’s recent production trajectory looks similar to the early days of the North Dakota boom. So does Oklahoma’s, while Ohio’s Utica Shale has attracted investments from one of the fathers of the U.S. energy renaissance, former Chesapeake Energy CEO Aubrey McClendon. Even California has eked out small production gains in the past two years and has seen renewed interest in some of its old fields (although the uptick has barely made a dent in the state’s longer-term decline).

Still, all those states face significant hurdles — geological, regulatory or both — if they want to join the powerhouse duo at the top of the U.S. oil world.