Monday’s Bowl Championship Series title game is attracting a significant amount of attention from fans and the news media. Google searches for the terms “BCS Championship Game” and “BCS Title Game” are on pace to be about twice as high as they were last year. Senior executives at ESPN, which will televise the game, are openly speculating that the contest could challenge ratings records — perhaps matching the mark set in 2006, when the game between Texas and U.S.C. attracted a 21.7 Nielsen rating.

There are reasons for television executives to be excited. Notre Dame ranks as the fourth-most popular football program in the country, and Alabama as the eighth, according to an analysis I conducted in 2011. And the game could provide Notre Dame with its first national championship since 1988, in a year in which it began the season unranked in the Associated Press poll.

If you strip away the uniforms and the back story, however, the game looks only average by B.C.S. title standards. Six times in the past the two teams that competed for the title each entered the game undefeated, something which is not true this year. (Alabama lost to Texas A&M in November.)

And Notre Dame, though it has come through in the clutch so far, has not looked dominant, having won five of its games by a touchdown or less, including two wins in overtime. Its average margin of victory this season has been 16 points, considerably less than the 36-point average victory margin that Texas achieved before playing in the 2006 B.C.S. Championship at the Rose Bowl, or the 29-point winning margin that U.S.C. had on average that same season.

Another way to measure team strength is through computer power rankings, such as those developed by Jeff Sagarin for USA Today. The “predictor” version of Mr. Sagarin’s ratings, which account for margin of victory, are considered more reliable by bookmakers than those that evaluate wins and losses alone. (Mr. Sagarin produces a separate version of his ratings for use in the official B.C.S. formula, which forbids the use of margin-of-victory calculations.)

Notre Dame has a 93.3 rating according to Mr. Sagarin, lower than the average rating of 97.1 for teams to play in the B.C.S. Championship Game since its inception in 1999. This is partly because its strength of schedule has been only average, ranking 27th in the country, according to Mr. Sagarin. (Notre Dame scheduled aggressively, but some of its traditional rivals like Purdue and Boston College had down years.) Alabama has a higher rating, 98.9, despite having taken a loss on the year; they are also 10-point favorites at some sports books in Las Vegas.

The teams’ combined rating, 192.2, ranks in the middle of the pack historically. By contrast, Texas and U.S.C. combined for a 207.9 rating in the 2005-6 season, the highest figure in the history of the B.C.S. title game.

(The chart below provides Sagarin ratings for past B.C.S. title game participants. Because the historical versions of Mr. Sagarin’s ratings available online were calculated at the end of the season — that is, after the B.C.S. title game was played — I have adjusted them by taking out the scoring margin in the championship itself so as to approximate what they would have been in advance of the game.) 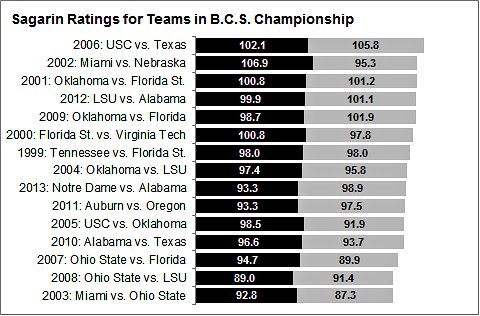 Fortunately for Notre Dame, the computers and bookmakers are not always right. The Las Vegas betting favorite is just 8-6 historically in the B.C.S. title game, and two teams (Ohio State in 2003 and Oklahoma in 2001) won despite being underdogs by 10 points or more.

Instead, the best determinant of television ratings for the B.C.S. Championship has simply been what the teams did once they got onto the field. In order for this year’s game to live up to its advanced billing, it will very probably need to remain competitive through all four quarters, as the U.S.C.-Texas game did in 2006.

One simple way to measure the competitiveness of a football game is to take the average margin separating the teams after each of the four quarters. This helps to distinguish games that are competitive throughout from those in which the trailing team scores a meaningless touchdown or two late in the game to bring the margin superficially closer.

According to this measure, the least competitive games in the B.C.S. championship came in 2002, when Miami took a 34-0 lead over Nebraska in the second quarter and never looked back, and in 2005, when U.S.C. crushed Oklahoma 55-19. Both matchups had seemed attractive enough on paper. But these wound up being the two lowest-rated games in B.C.S. title history, registering Nielsen ratings of 13.8 and 13.7. In contrast, the six B.C.S title games where the score margin averaged less than a touchdown throughout the game had 17.5 ratings on average, about 25 percent higher.

Part of the attraction of this year’s game is that, despite being the nominal No. 1 seed, Notre Dame enters the championship as underdogs — certainly in the view of Las Vegas bookies and computer programs like Mr. Sagarin’s, but also in the mind of most football fans who have seen Southeastern Conference teams (including Alabama) romp to six national championships in a row. If Notre Dame is able to keep pace with Alabama, the game should be remembered as a classic. But underdog stories that end in a 55-19 or 34-0 defeat don’t usually hold their audience’s attention.

An earlier version of this post misstated one of the recent underdog teams with point spreads of 10 points or more to have won the B.C.S. title game. In 2003, an underdog and No. 2-ranked Ohio State team won, and not No. 1 Miami; Ohio State defeated Miami in that season’s championship game.