What will the Republican Party do about the extremists in its ranks?

As a sign of where things are headed: Just five Senate Republicans agreed that the trial was constitutional in an earlier procedural vote in January, suggesting that it is extremely unlikely Democrats garner the 17 Republican votes necessary to convict Trump.

[Related: The GOP Might Still Be Trump’s Party. But That Doesn’t Mean There’s Room For Him.]

Public opinion, though, does show a majority supported Trump’s impeachment — 53 percent, on average, said they supported Trump being removed from office before he left the White House on Jan. 20. 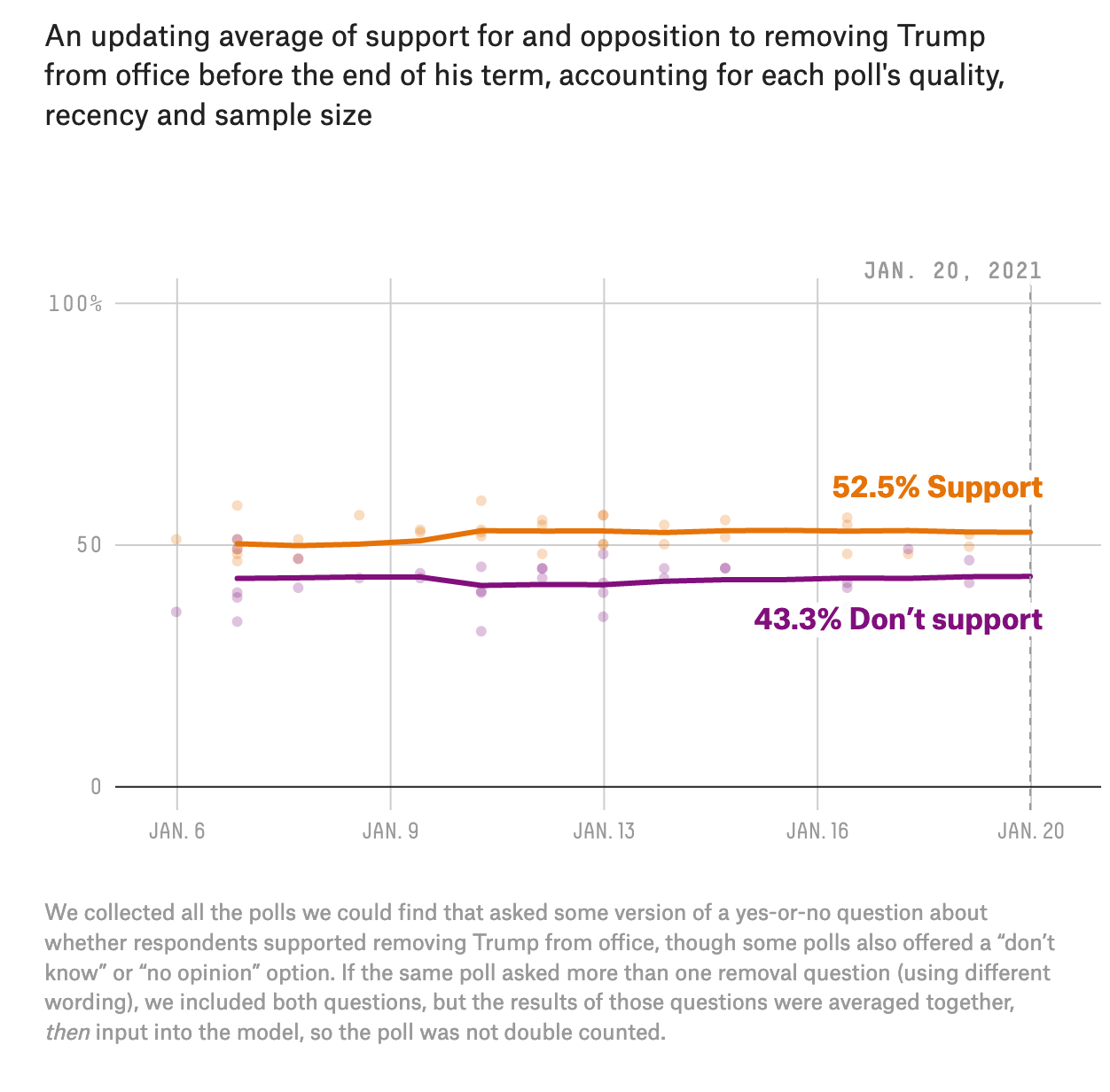 That’s more support than in 2019, when only around 48 percent said the same when Trump was acquitted by the Senate on both articles of impeachment: charges of abuse of power and obstruction of Congress after pressuring Ukrainian president Volodymyr Zelensky to investigate now-President Joe Biden and his son Hunter.

However, as was true in 2019, there is a slight difference between support for Trump’s impeachment, which takes place in the House of Representatives, and support for his conviction in the Senate — the step that would have removed him from office, were he still there, and could lead to him being barred from running for federal office again. Right now, recent polls show that support for conviction sits at about 50 percent; that 3-percentage-point difference in support is similar to the difference in 2019, when support for removal hovered just marginally below support for impeachment throughout the process.

[In America’s ‘Uncivil War,’ Republicans Are The Aggressors]

Interestingly, though, while support for conviction is lower than support for Trump’s impeachment, there is some evidence more Americans support barring Trump from holding future political office: 55 percent overall back this, according to a FiveThirtyEight average of 13 polls. And as you can see in the table below, this is true among both Democrats (88 percent support barring Trump from office, compared to 85 percent who support conviction) and Republicans (where those numbers are 20 and 13 percent, respectively).

But despite public support for it, barring Trump from office probably isn’t an option. Trump would likely need to be convicted first before senators could vote on barring him from running for federal office. And since 45 Senate Republicans have already voted that the trial is unconstitutional, 67 senators voting to convict Trump seems like a long shot.

And as the last impeachment process taught us, opinions on something this politically polarized don’t easily shift. The initial response to the Jan. 6 attack on the Capitol may have briefly given the impression that things could be different, but with Republican senators now largely refusing to entertain the possibility of impeachment, and House members like Rep. Liz Cheney under fire for their vote in support of impeachment, any potential momentum from that event seems to be well and truly quashed.