In politics, sifting for the truth can be a difficult endeavor. Black and white are rare commodities, and most often voters, the press, politicians and political observers are left trading in grays.

It can be frustrating. But several organizations have sprung up with the sole mission of wringing out some clarity. One of the most respected is PolitiFact, a venture of The St. Petersburg Times in Florida. PolitiFact, which won a Pulitzer Prize in 2009, started grading political claims in 2007 and has amassed a sizable chunk of data. So, we thought it would be fun to examine the report cards earned so far by the declared 2012 Republican presidential candidates.

First, some quick notes on how PolitFact works and a few words of warning. PolitiFact reporters, researchers and editors grade each statement as true, mostly true, half true, mostly false, false or “pants on fire” (the scale is pretty self-explanatory, but here is a more thorough breakdown of what each grade means).

Second — and most important — PolitiFact only looks at statements that pique its interest. Here’s how Bill Adair, the editor of PolitiFact, described the process: “We select statements that we think readers will be curious about. If someone hears a claim and wonders, ‘Is that true?’ then it’s something that we’ll check.”

In other words, if Mitt Romney says the sky is blue, PolitiFact doesn’t bother grading the statement as true. So there is a sampling bias at play here. Accordingly, the following numbers should be interpreted with caution. They aren’t perfect indicators of the honesty of each candidate, and conclusions like “Candidate X lies the most” or “Candidate Y is the most truthful” should probably not be drawn from the data.

Nevertheless, here are the number of each PolitiFact grade earned by the Republican candidates to date (the data includes statements from Thursday night’s debate): 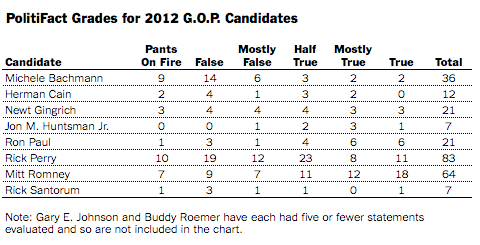 There are a lot of numbers there. So here are the candidates’ grades shown as a percentage of the total number of statements each has had judged:

As you can see, some candidates have fared better than others. Over 60 percent of Representative Michele Bachmann’s statements were ruled either false (“The statement is not accurate”) or pants on fire (“The statement is not accurate and makes a ridiculous claim”). Herman Cain and former Senator Rick Santorum didn’t fare any better, although both have not had that many grades given to them.

At the other end of the spectrum lie Representative Ron Paul, former  Gov. Jon M. Huntsman Jr. of Utah and Mr. Romney, a former governor of Massachusetts. Mr. Huntsman garnered the most favorable grades, but has had few claims evaluated. Mr. Paul did particularly well relative to the other candidates, earning an unambiguous “true” verdict for almost a third of his statements and a “mostly true” for almost another third.

To simplify things a bit, we can combine some categories and differentiate statements by whether they were more true than not. So, we’ll combine the pants on fire, false and mostly false categories and merge half true, mostly true and true.

In addition to Ms. Bachmann, Mr. Santorum and Mr. Cain, former House Speaker Newt Gingrich round out the group of candidates who had more than half their statements judged more wrong than right, although just barely for Mr. Gingrich.

In addition to Mr. Paul and Mr. Huntsman, Mr. Romney and — by a hair —  Gov. Rick Perry of Texas were judged to have packed more correct than incorrect into their statements.

Of course, whichever of these candidates wins the Republican nomination will meet President Obama in the general election. So how has Mr. Obama fared?

Mr. Obama seems particularly adept at avoiding the pants on fire designation, with only 1 percent of his statements receiving that grade. PolitiFact has analyzed a whopping 320 claims made by the president and deemed 71 percent of them at least half right. Only Mr. Paul and Mr. Huntsman – at 76 percent and 86 percent, respectively — scored higher.