WIMBLEDON, England — And on the 2,933rd day, an American man reached a Grand Slam semifinal.

Sam Querrey, a 29-year-old from California, ousted defending champion Andy Murray at Wimbledon on Wednesday and became the first American man to reach the semifinals at a Grand Slam tournament since Andy Roddick here in 2009.

Happiness rarely graces American men’s tennis these days. Fourteen years ago, Roddick won the U.S. Open. No American man has won a major since. Only one American male player besides Roddick has appeared in a major final since Roddick’s win: Andre Agassi, who lost to Roger Federer at the 2005 U.S. Open. Roddick played four more Grand Slam finals until 2009 and lost them all to Federer, including a heart-breaking five-set defeat at Wimbledon in 2009.

Agassi retired after the 2006 U.S. Open. Roddick left the game on his 30th birthday in 2012 (less than three months older than Querrey is now). And no American man has broken into the elite ranks of men’s tennis since. Querrey is the first U.S. player to make his debut in a Slam semifinal since Robby Ginepri reached the final four of the 2005 U.S. Open. Getting to a semifinal took him forever: This was Querrey’s 42nd Grand Slam main draw, now a record for a first-time semifinalist in the Open era. By comparison, Agassi made his first Slam semifinal in 1988, less than two years after his first major appearance. In the next nine years, eight Americans would make their semifinal debuts.1

A handful of superstars has usually dominated men’s tennis. For a while, the U.S. had one or two of them, sometimes even more. Lately it’s had none, in part because the sport has become more global. Since the end of 2005, 24 non-American men from 19 countries have reached a Grand Slam semifinal for the first time, including Ivan Ljubicic (Croatia), Kei Nishikori (Japan), Fernando Gonzalez (Chile), and Grigor Dimitrov (Bulgaria). 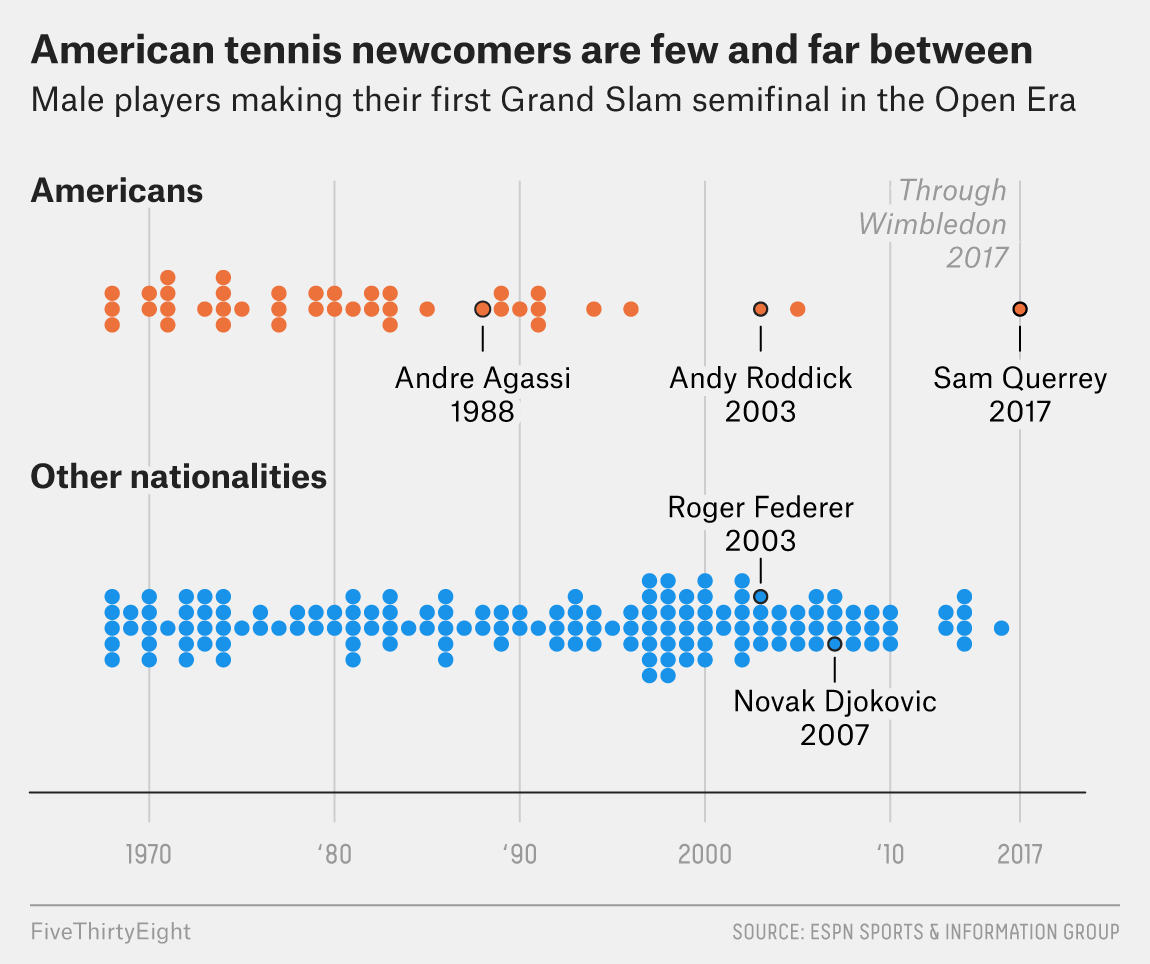 The globalization of tennis has slowed down America year after year. In the early Open era, beginning in 1968, into the 1970s and ’80s, America led the world in tennis training, practice and equipment. American men won loads of Grand Slam titles from 1968 through the 1990s, when John McEnroe, Jimmy Connors, Agassi, Pete Sampras and Jim Courier ruled. From 1990 to 1999, American men reached the semifinals or better 62 times at Grand Slams.

All the while, though, foreign tennis training improved. By the time 2000 came along, diversity had climbed. American men reached the semifinals or better only 26 times from 2000 to 2009.

And then, nothing. Players have rarely escaped the early rounds at the French Open, where clay feels foreign compared to American hard courts. Not that those hard courts help much. At the U.S. Open, American men haven’t looked like title contenders since Agassi and Roddick. The U.S. Tennis Association, so worried about that decline, has invested in a $63 million training center in Florida that has 100 courts.

For all those efforts, who to blame is simple: Federer and his cohorts. They’ve made the final two rounds an exclusive club since Federer won his first Slam in 2003. He’s now won 18, while Rafael Nadal has 15, Novak Djokovic 12 and Stan Wawrinka and Murray three each. Since 2004, only four other men have won a major title, and only one for each: Gaston Gaudio, Marat Safin, Juan Martin del Potro and Marin Cilic, who will play against Querrey in Friday’s semifinals. These top players tend to make it to the semifinals before they lose, making it difficult for anyone, let alone an American, to reach the semis.

From the beginning of 2005 through the French Open last month, Federer, Djokovic, Nadal and Murray accounted for 57 percent of all the Grand Slam semifinal slots. Querrey, as happy as can be, is being realistic about his chances.

“Marin [Cilic] is ranked, like, five,” Querrey said. “He’s right outside of the big four. That’s going to be a tough one.”

That’s about the only thing Querrey has done wrong so far: Cilic is ranked sixth.

CORRECTION (July 14, 1:40 p.m.): A photo caption in an earlier version of this story incorrectly said that Querrey was the first American to reach a Slam semifinal this decade. He is the first American man to do so. A chart in this article also has been updated to clarify that the data pertains only to men’s tennis.