When a reader asked me last week about trust funds, I ended up taking a bigger look at how many Americans receive inheritances and how much they receive. We’re not talking about pocket money here. According to the 2010 Survey of Consumer Finances, the median inheritance is $69,000. So, even though only 22.5 percent of Americans said they had inherited, I wanted to find out who those people were.

And, as my original article suggested, this isn’t mere nosiness: The demographics of inheritance could affect economic equality.

Maury Gittleman at the U.S. Bureau of Labor Statistics teamed up with Edward N. Wolff of New York University to produce a working paper that looked at inheritances from 1989 to 2007. When they studied the prosperity of households over that period, the most likely Americans to inherit were those who, on the face of it, needed it the least. On average, 38 percent of households earning $250,000 a year or more received an inheritance, compared with only 17 percent of households with an income of $15,000 or less.

The gap was even wider when Gittleman and Wolff looked at those households’ wealth rather than annual incomes. Wealthier households aren’t just more likely to inherit, they also receive larger sums.

There were racial and ethnic differences, too: 25 percent of non-Hispanic whites said they had received an inheritance in 2007, but just 10 percent of African-Americans and 6 percent of Hispanics said the same. And those gaps haven’t changed by more than a few percentage points since 1989.

In light of all this, you might be surprised that the authors concluded that inheritances and other transfers “had a sizable effect on reducing the inequality of wealth.” 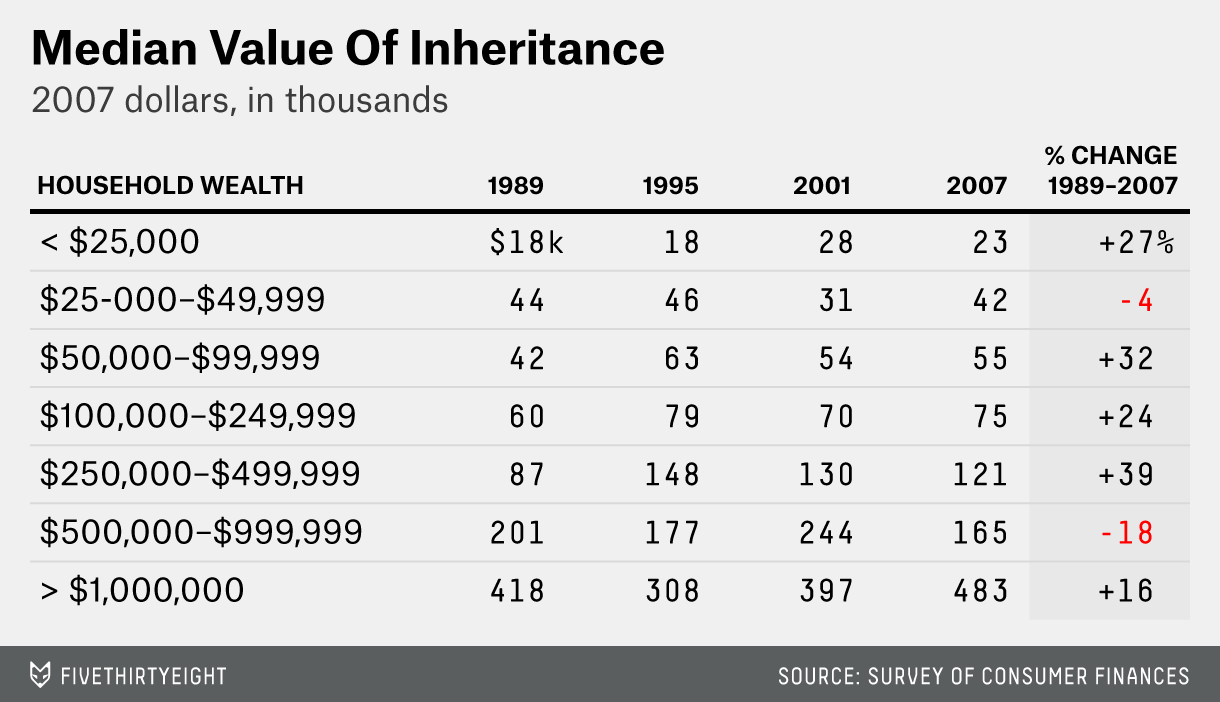 The authors, however, acknowledge important caveats: Their research doesn’t consider a possible underreporting trend (if rich people are more likely to be ashamed of inherited wealth, they might conveniently forget to mention it in a survey), and the paper’s method of calculating the data might have overemphasized transfers to the poor and thereby underestimated inequality.

Of course, this is just one study. Others have looked at inheritance in the U.K., Paris and the U.S., and reached different conclusions. But that research also used different data. The advantage of referring to the Gittleman and Wolff study is it used the data set I used in my original piece.

And one final thought: Those inheritors might not be receiving wealth in the form of cash — businesses (perhaps with accompanying Rolodexes) and homes are also among the inheritances. Those transfers could have more lasting effects, which might not be captured in the absolute dollar value of the inheritance at the time it was inherited.