You already hate tax season, and as you move wearily through the cold calculations of the 1040 form, you come across a familiar checkbox. It’s the one that requests permission to send $3 to the “presidential election campaign,” delivering cash to a bunch of politicians that you’re sure are awash in money anyway.

“What’s the point?” you might ask yourself. To fund more polarizing and negative campaign ads? You happily refuse to check the box.

By doing so, you joined 94 percent of Americans who also declined to make that checkmark. The share of tax forms with a checked box has been declining steadily for decades.

That widespread sentiment is one of the principal reasons why the public funding of presidential campaigns, long a goal of campaign finance reform activists, is dying. Because the checkoff has provided a reduced stream of money, public financing is no longer an attractive option for the major party candidates, who now prefer to let private citizens with money pay for their campaigns.

When you agree to the $3 tax checkoff, it funds the Presidential Election Campaign Fund (PECF), a common pool of money that matches the fundraising of eligible presidential candidates in primary and general elections, for those who choose to take it. The $3 does not come out of your taxes; it’s just $3 less the government receives in tax revenue.

Almost from its inception in 1976,1 participation in the program has been on a steady downward trajectory. In 1980, 28.7 percent of tax returns had a checked box, the peak year of participation. But that support began to steadily erode, and by 2013, participation had fallen to 6 percent of all tax returns. 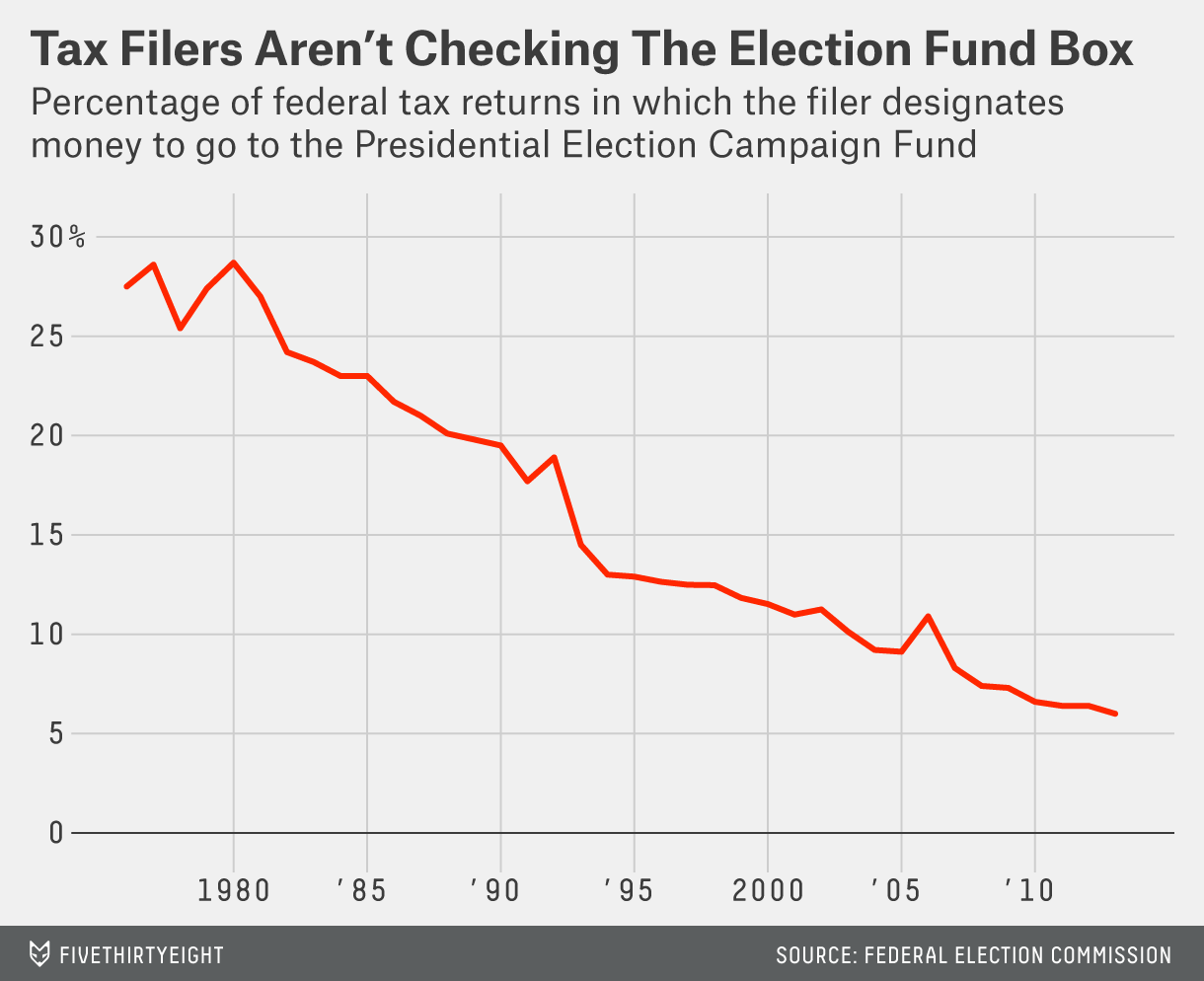 It’s not clear why the tax checkoff program became so unpopular with Americans. It might be disgust with U.S. politics, as approval ratings of Congress plunge to near all-time lows. Another cause might be the huge volume of private money that has flooded into presidential campaigns. The total amount spent on the 2012 election ($2.6 billion) was 40 percent greater than the amount spent in the 2000 election ($1.9 billion, in 2012 dollars), according to the Center for Responsive Politics. Public cynicism about the sheer amount of money in politics might have led to disenchantment.

From the perspective of candidates, their growing ability to raise private funds dramatically changed the calculus of taking public funds. That is because public money comes with strings attached — like limiting campaign spending to a pre-specified amount. But candidates nowadays can easily blow by those limits by raising money in completely legal, ordinary ways — even after excluding “outside” money, like the financial support of super PACs and so-called dark money groups, known as 501(c)(4)s.

In 2008, both Obama and Hillary Clinton rejected public financing during the Democratic primary. While John McCain, the Republican nominee, took the public funds for the general election, Obama passed on it there, too. Then, in the 2012 election, both Obama and Mitt Romney refused to take public money in the primary and general elections, the first time that happened since the program began. That’s an understandable decision; Obama and Romney would have each received $91.2 million from the Treasury for the 2012 campaign if they had taken public financing. But by 2012, Obama and the Democratic Party had raised over $1 billion; Romney and the Republicans raised $993 million.

Without any major party candidate to fund, payouts from the fund plummeted more than $100 million in 2012, down to $37.8 million. (That’s compared to disbursements of around $240 million in both the 1996 and 2000 presidential elections.) Smaller withdrawals meant the fund’s balance grew — to over $231 million by the end of 2012, an all-time high — even though it takes in less money every year. Despite fewer and fewer Americans checking the box, the fund’s balance will likely keep getting bigger, but it still won’t be a match for private money.

While doing your taxes over the next week, linger a little longer over that checkbox. It’s a reminder of a time when there was far more support for the public funding of presidential campaigns.

CORRECTION (April 9, 2:47 p.m.): An earlier version of this article misstated the amount of money raised by Mitt Romney and the Republicans for the 2012 presidential campaign. It was $993 million, not billion.