After a decade of near silence, Monica Lewinsky spoke out Tuesday with a piece in Vanity Fair on her affair with President Bill Clinton. To mark the occasion, BuzzFeed put together a very funny article imagining how certain websites — had they existed in 1998 — would have covered the scandal. It’s the media’s equivalent of historical fiction. Here’s the FiveThirtyEight parody: 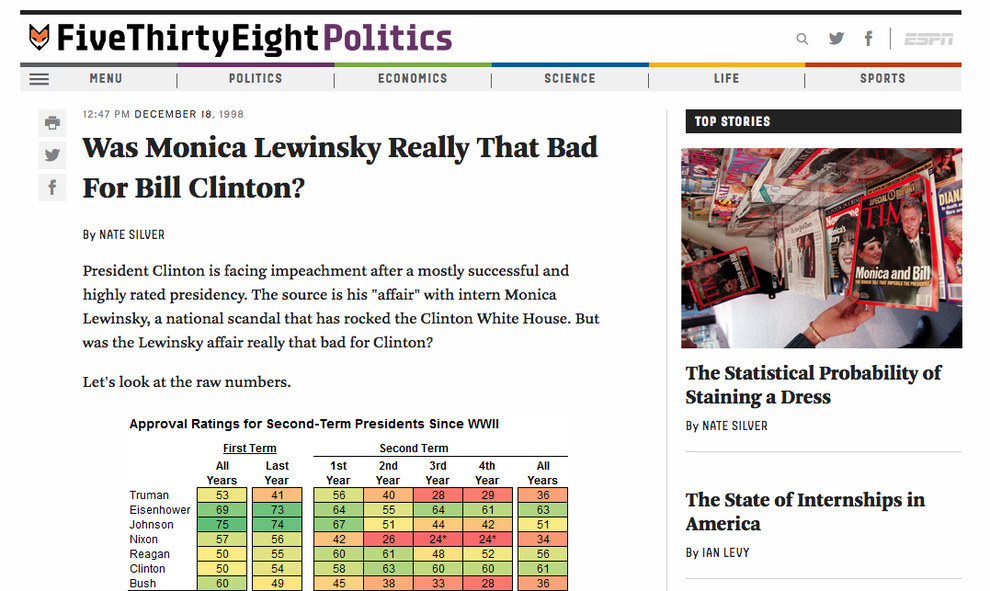 It’s a great parody; a little too good, in fact (are we that predictable?). Still, we would have done things a bit differently.

BuzzFeed’s faux FiveThirtyEight article looked at how Clinton’s approval ratings were affected by the incident. (For the record, a booming economy helped those ratings rise from the high 50s to nearly 70 percent.) But we probably would have also looked at Clinton’s favorable ratings, which weren’t nearly as good. Since 1980, a president’s favorable ratings in the CBS News/New York Times poll have had the same effect on electoral results as his approval ratings.

Just prior to the time our hypothetical article was written — Dec. 18, 1998 — CBS News recorded Clinton’s favorable rating at just 43 percent. His unfavorable rating was 41 percent.

We probably would have concluded that the effect of the scandal was complex. On the one hand, most Americans approved of Clinton’s job performance, which helped his party. On the other, Clinton’s actions gave Republicans an opportunity to argue that “honor and dignity” should be restored to the White House, which hurt the Democrats.

Close, BuzzFeed, but no cigar.