On Friday, the U.S. Supreme Court delivered a monumental victory for gay rights, requiring that all states license marriages between people of the same sex. That decision was in many ways the culmination of a striking shift on the court, one that paralleled the huge turn in public opinion on the issue. As recently as 1986, for example, the court found no constitutional protection against laws banning consensual homosexual sex.

Here is a brief history of gay-rights decisions at the court. The chart below shows the cases, the ideology of the justices on the court at the time (as measured by the Martin-Quinn score), and how each justice voted. 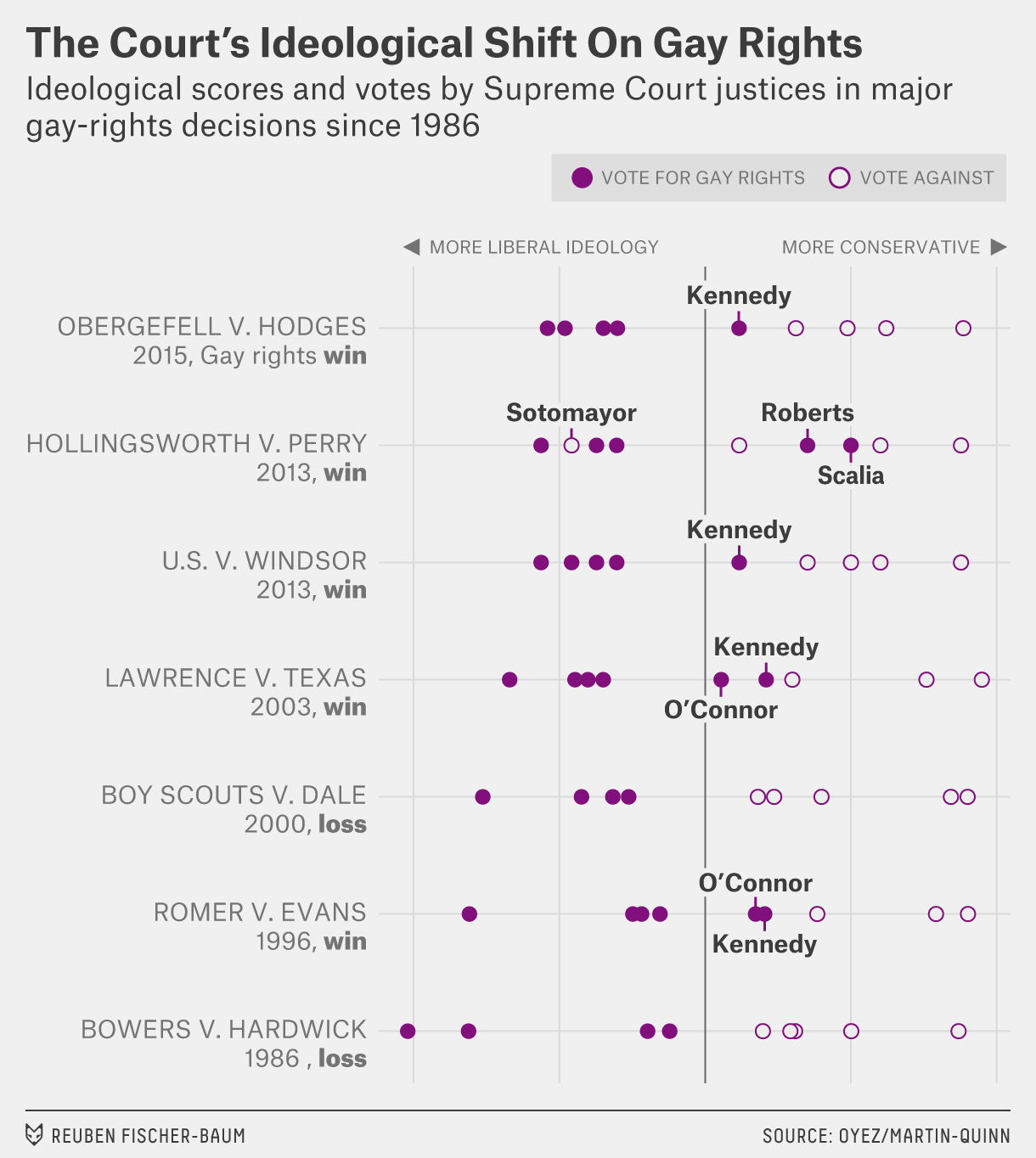 A Los Angeles postmaster declared ONE: The Homosexual Magazine to be obscene and refused to deliver it. The magazine sued, and the case made its way to the Supreme Court. This was the first Supreme Court case to deal with homosexuality, and also the first victory there for gay rights. The court didn’t even hear oral argument on the case and issued a short, to-the-point per curiam decision (so this case does not appear on the chart above) holding that the magazine’s writing did not constitute obscenity.

A police officer in Georgia observed a man having consensual homosexual sex in his own bedroom, an act which was then illegal there. The man was charged, and his case made it to the Supreme Court, where, in a 5-4 loss for gay rights, the court found no constitutional protection for acts of sodomy. Indeed, the court found that states could ban those acts.

After Colorado residents voted for a state constitutional amendment precluding any laws protecting individuals based on sexual orientation, homosexuals and other groups sued. Their case was heard at the Supreme Court in 1995, and the court found, in a 6-3 vote, that the Colorado amendment violated the Constitution’s equal-protection clause.

The Boy Scouts ousted a former Eagle Scout from his position as an assistant scoutmaster when the organization found out that he was gay. The man, James Dale, filed suit. The Supreme Court eventually ruled, 5-4, that dismissing Dale was within the group’s rights, specifically its “First Amendment right of expressive association.”

Two men in Texas were arrested and convicted after the police observed them having consensual sex, in violation of state law. They appealed and eventually, in a 6-3 vote, the Supreme Court ruled in the men’s favor. Justice Anthony Kennedy wrote that “Their right to liberty under the Due Process Clause gives them the full right to engage in their conduct without intervention of the government.”

The court ruled 5-4 that the Defense of Marriage Act, a law enacted during the Clinton administration that defined marriage under federal law as being between a man and a woman, deprived married same-sex couples of their Fifth Amendment right to equal protection. Kennedy, by this point a well-known champion of gay rights, again delivered the opinion of the court.

The court found that the petitioners — sponsors of California’s Proposition 8, a measure passed in 2008 that banned same-sex marriage there — did not have standing to bring their case. This, in effect, overturned Proposition 8. In a dissent, Kennedy, joined by the unlikely trio of Justices Sonia Sotomayor, Clarence Thomas and Samuel Alito, argued “that the Supreme Court should defer to states’ rights in defining what parties may have standing.”

And on Friday, the Supreme Court ruled, in a 5-4 vote, that states must license marriages between people of the same sex, thereby legalizing same-sex marriage nationwide. Once again, Kennedy delivered the court’s opinion, which Justices Ruth Bader Ginsburg, Stephen Breyer, Sotomayor and Elena Kagan joined:

No union is more profound than marriage, for it embodies the highest ideals of love, fidelity, devotion, sacrifice, and family. In forming a marital union, two people become something greater than once they were. As some of the petitioners in these cases demonstrate, marriage embodies a love that may endure even past death. It would misunderstand these men and women to say they disrespect the idea of marriage. Their plea is that they do respect it, respect it so deeply that they seek to find its fulfillment for themselves. Their hope is not to be condemned to live in loneliness, excluded from one of civilization’s oldest institutions. They ask for equal dignity in the eyes of the law. The Constitution grants them that right.