If you are a Republican trying to keep your job in Congress, your feelings about President Obama notwithstanding, would you rather the economy be better or worse?

The answer is actually not so obvious. In five election cycles in the last 60 years, a poor economy combined with a divided government. This is how they proceeded:

1948 (Democrats control presidency, Republicans control Congress). This is one precedent favorable to Democrats, and unfavorable to Republicans in the House. The economy sputtered throughout the term that Harry Truman inherited from Franklin D. Roosevelt and was headed back into recession just as the election took place. However, not only did Truman, who ran a highly partisan campaign criticizing the “do-nothing Congress,” maintain the presidency, but Democrats also had a net gain of 75 seats in the House and 9 in the Senate, taking control of both chambers.

1960 (Republicans control presidency, Democrats control Congress). This election is not normally remembered as one driven by the economy, but the country was in recession at the time and had endured another recession early in Dwight D. Eisenhower’s second term. Eisenhower, however, remained personally popular, and his vice president, Richard M. Nixon, was the Republican nominee. Democrats won, but not in impressive fashion, with John F. Kennedy defeating Nixon by one-tenth of a percentage point in the popular vote (although his margin in the Electoral College was more robust). Democrats kept control of Congress, but lost 22 seats in the House and 1 in the Senate.

1992 (Republicans control presidency, Democrats control Congress). Bill Clinton defeated George H.W. Bush, although with only 43 percent of the popular vote, as Ross Perot took 19 percent. Most research suggests, however, that Mr. Perot did not cost Mr. Bush the election, and may have even taken votes away from Mr. Clinton. Mr. Clinton’s coattails were underwhelming, however: Democrats  lost nine seats in the House, while gaining one in the Senate.

2008 (Republicans control presidency, Democrats control Congress). This was truly a clean win, as Barack Obama claimed the presidency and Democrats expanded their numbers  in both chambers of Congress, gaining 21 House seats and 8 Senate seats.

If you’re looking at this history from President Obama’s perspective, the results do not seem so promising. In all five elections, one party swept both the presidency and Congress. And in four out of five cases, it was the party that controlled Congress — not the presidency — that did so. The situation is by no means completely hopeless: there is a reasonably clear precedent. In 1948, Truman succeeded in passing blame along to Congress, and Nixon in 1960 and Ford in 1976 might easily have won. But under normal circumstances, a president will take a hit for a poor economy, and a divided government will provide an insufficient buffer. (I would argue that a renewed economic crisis triggered by a debt default is not “normal circumstances,” but let’s leave that alone for now.)

On the other hand, the results also do not look so great if you’re a Republican representative interested in keeping your job. In these elections, the party in control of Congress did not do particularly well at retaining its seats, actually losing an average of 17 seats in the House and breaking even on average in the Senate. The party in control of Congress also saw its share of the House popular vote decline in four of the five years, to an average of 50 percent of the vote from 54 percent in the previous midterm.

(One other oddity: the party completing the sweep in all five cases was the Democratic Party. This is probably meaningless, although it is at least theoretically possible that Democrats have an inherent advantage over Republicans in difficult economic times when voters might have reason to blame either party.)

So there is something of a tradeoff here. Certainly, a poor economy is liable to hurt the president — and presidents normally have coattails, whether positive or negative. At the same time, Republicans  might also share in some of the blame if the economy is poor: voters could split their tickets and vote against both their Republican lawmakers and President Obama.

One experiment predicts the number of seats that the party in control of the House of Representatives will gain or lose based on two factors: the performance of the economy and the share of the popular vote that its candidate receives for president. For the economic variable, we’ll use per capita disposable income growth as defined by Douglas Hibbs, which I have calculated going back to 1924.

If you put each of these variables into a regression equation, you find — unsurprisingly — that the party in control of the House tends to do better when its presidential candidate performs well. But it also tends to do better when the economy is strong, other factors being equal. These effects appear to be statistically significant in cases in which the House and the presidency are controlled by different parties as well as those in which they are controlled by the same one, although the small sample sizes make it hard to know for sure.

Given my repeated admonitions against taking these sorts of models too literally, I’d digest the following with ample grains of salt, but here are the results from a somewhat fancier version of the equation that includes an interaction term between the two variables. The numbers reflect predictions about the number of seats that Republicans would gain or lose in the House based on various situations having to do with the performance of the economy and their presidential candidate. Values shaded in blue represent those cases in which the Republican Party would be projected to lose control of the House. 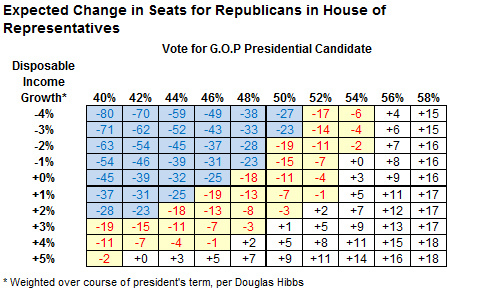 This chart, which looks something like the one used to calculate the wind chill factor, might give you a headache. But there are four basic possibilities:

The economy is reasonably strong and Obama wins. In this case, which is reflected in the values in the bottom left-hand corner of the chart, the most likely outcome is that Congressional Republicans lose a few seats in the House. But their majority would not necessarily be threatened: voters could be in a magnanimous mood and might want to keep their divided government, and Mr. Obama might attempt to coast to victory on a “Morning in America” theme rather than adopting a more partisan tone. If you look at the presidents who were re-elected with a divided government and a good economy — Clinton in 1996, Reagan in 1984, Nixon in 1972 and Eisenhower in 1956 — they produced few coattails, with their parties gaining an average of nine seats in the House, failing to take control of the chamber in all four instances, and losing one seat on average in the Senate.

The economy is poor and Obama loses. This is the converse of the previous possibility. Republicans would be likely to retain control of the House, but it isn’t necessarily any kind of bonanza. The historical evidence suggests that the party in control of the House performs marginally when the economy is doing poorly, even if its president does well and wins. Under some circumstances — for instance, if the Republican presidential candidate won by an extremely slim margin, or won with a plurality of the vote because third-party candidates took some votes off the table — it’s entirely possible that the Republican Party would lose the House while winning back control of the presidency.

The economy is poor and Obama wins anyway. This is the worst possibility for Republicans because it implies that, as in 1948, the public will have rendered a judgment about who is responsible for the state of the economy, and that judgment will have been made against them. If voters are willing to re-elect President Obama despite a lagging economy, it will almost certainly mean they’ll also punish Republicans in Congress. The model argues that Republicans would be favored to lose the House in this eventuality, perhaps by a significant margin. Fortunately for Republicans, this possibility is relatively unlikely, although it could be triggered by some crisis –  like a debt default for which they shared in the blame, or by a poor Republican candidate who turned off independent voters and allowed Mr. Obama to manage a victory.

The economy is reasonably strong but Obama loses. This possibility is even less likely — it takes a lot to beat an incumbent president, and if the economy is reasonably healthy it can be next to impossible. The closest thing to a comparison is probably something like 1952: the economy was doing quite well that year, but the Korean War had become fairly unpopular, Democrats had been in power for a long time, and Republicans nominated an exceptional candidate in Eisenhower, leading Truman to decline a chance at another term and Adlai Stevenson to do poorly in his place. Winning under these circumstances would imply that Republicans had really won the argument on the merits, and their presidential candidate would probably have substantial coattails in Congress, as Eisenhower did in 1952: Republicans won 22 seats in the House that year and 2 in the Senate, gaining control of both chambers.

The moral is that the Republicans in Congress — as opposed to the Republican presidential candidate — will not necessarily benefit from a poor economy.

But the particulars get a little more complicated, since when the other party controls the White House, two effects cut against one another. On the one hand, presidents get blamed for a bad economy, and that is likely to have some effects down the ballot. About a third of voters who participate in presidential election years do not vote in midterm years and may have little interest in Congressional races, often voting a straight party ticket. On the other hand, the historical record provides some suggestion that voters are sophisticated enough to spread the blame around and vote all the rascals out of office. The majority party in the House has lost seats on average when the economy is poor, even when the president is from the other party.

And there is one prominent case, 1948, in which a president succeeded in transferring blame to the Congress. This is why, particularly if the economy worsens but this is not perceived as being entirely Mr. Obama’s fault — for instance, in the event of a debt crisis — there is some downside risk for Republicans. Don’t be surprised if you catch David Plouffe, the senior White House political strategist, reading press accounts of Harry Truman’s campaign.